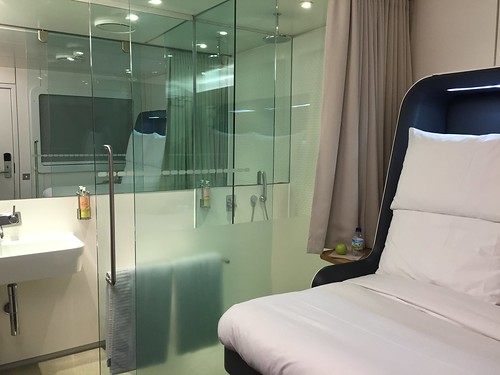 It could be argued that any industry that has its consumer over a barrel has no intrinsic need to be particularly good at what they do and I’d put airport hotels into this category. Goodness if there was ever a sector that was in need of an overhaul, then this would be it.

In my experience airport hotels are are often gasp-makingly expensive tower blocks, offer little more than what I think of as ‘bed in a box’, and leave a lot to be desired on the modern hotel experience. (Think nasty 80s decor, few power points, ugly bathrooms and crappy amenities.) And many aren’t in the terminals at all – they’re often a minibus ride away.

Happily the Yotel group are making huge steps in the right direction with their (currently) small but perfectly formed group of airport hotels which are actually in the terminals – there are also Yotels in Gatwick Airport, South Terminal, Amsterdam Airport Schiphol and Paris Charles de Gaulle.

Although the inaugural YotelAir opened at London Heathrow in 2007, I managed to completely miss this news – probably because this was the year that I moved full-time to New York. But back in 2005 I saw the prototype on display at 100%Design in London, and remember thinking how extraordinarily clever they were – and how extraordinarily compact.

Created by YO! founder (you’ve probably eaten in a Yo! Sushi) and serial entrepreneur  Simon Woodroffe OBE, and Gerard Greene, the airport Yotels aim to translate the language of luxury airline travel into small but luxurious cabins.

Essentially, they are very clever and very compressed all-singing and all-dancing pre-fab hotel rooms that can be winched into place. But the thing that really wins for the consumer is the pricing: the cabins are charged by the hour, with a 4 hour minimum stay, and an automated 24hr check in and out. That means a minimum day time stay for the entry level Standard Cabin could be as little as £35 – and that could be for two (intimate – a Standard is small) people.

When my sister and I flew to Peru last month the first leg of the journey with Air France was at 0930hrs. That meant an 0730hrs checkin, so a 5am wakeup and a £70+ cab ride. Given that we are both terrible last-minute packers, the likelihood was that we would have less than 2 or 3 hours sleep, and become unbearable sleep-deprived monsters throughout the journey to Lima.

Arriving at Yotel at 10pm on a Thursday evening in April, and departing at 0730hrs on the Friday morning would have cost £98. At that price it seems a no-brainer for anyone who has to take a cab to the airport out of public transport hours: it allows lots of extra lovely sleep and the minimisation of stress for a few extra quid. And for those taking 6am flights on cheap carriers I think it could be life-changing.

I have no photos of the exterior for the simple reason that there is none: the entrance is down an anonymous corridor, and the reception is a hole in the wall up a ramp – it feels like a very small gym – or the set of Red Dwarf.

We booked into two rooms for the purposes of exploration: a Premium Cabin, and a Standard Cabin. There are three types of room: A triple, which can sleep either three adults, or two adults and two very small children in one double bed and one large bunk-style single bed, the110 sqft/10sqm Premium Cabin which has either a double bunk (suitable for disabled access) or a convertible SmartBed’, designed exclusively for YotelAir, which glides at the touch of a button from sofa to flat bed,  and the extremely compact (just 7 square meters) Standard Cabin, which is great for one, cosy for two.

This is my Premium Cabin with Smartbed in upright position:

and collapsed. (There’s a video over on my Vine channel.) 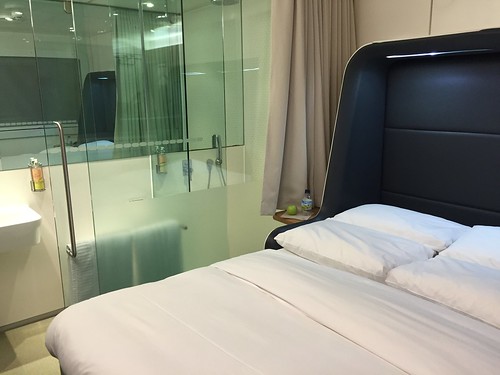 The view through the bathroom’s glass panel into the sleeping area – there are privacy curtains for the modest. 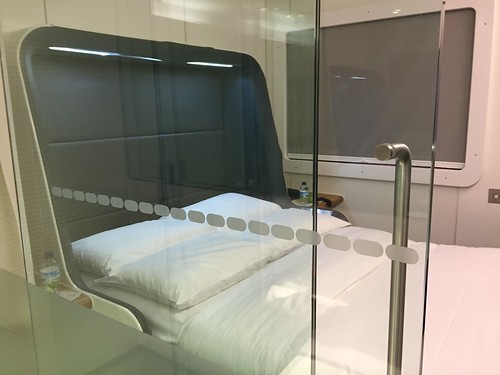 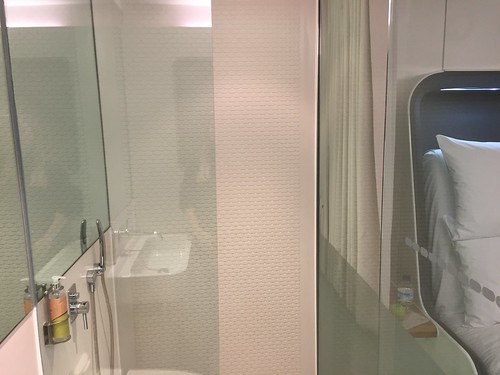 Every available inch of space has been made available for bag storage and  there is additional underbed storage too. 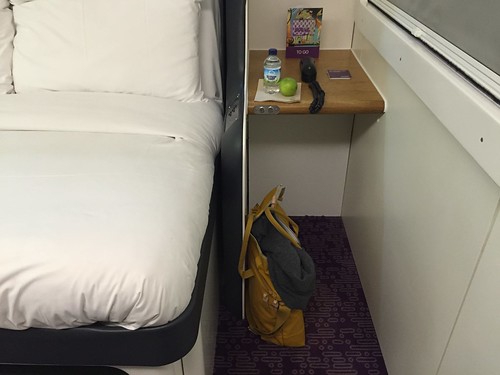 Rooms come with a complimentary bottle of water and an apple, earplugs, and quite nice smelling body wash. 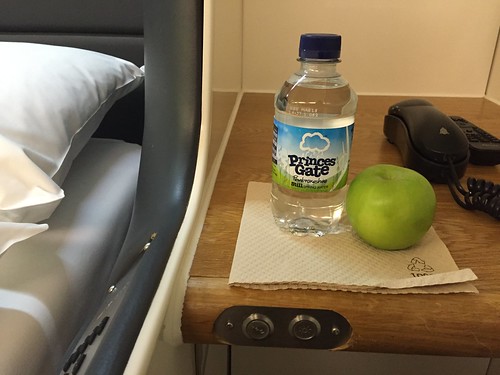 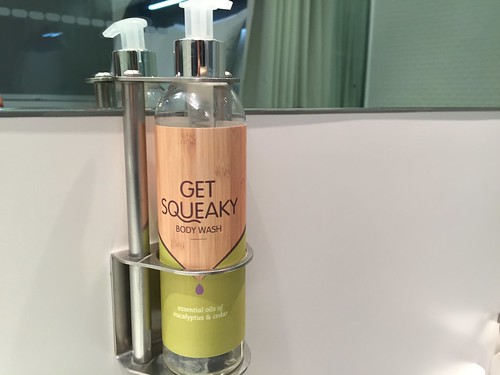 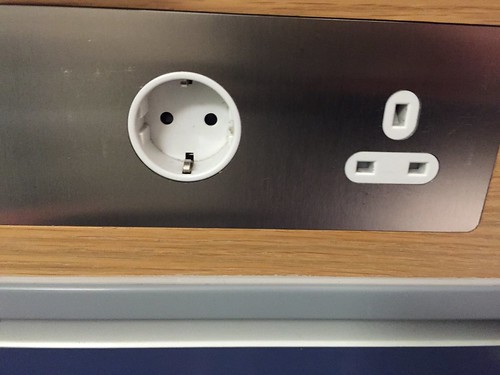 Every inch of space counts here: there’s no closet – after all, why would you need to unpack? So the hangers and combined coat hook are over the full length mirror. 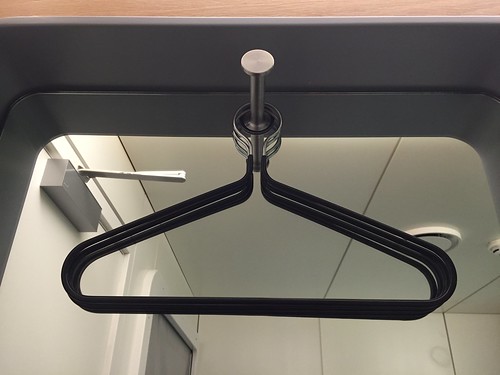 Love the amenity wall, with its pull out workstation, and hanging folding chair. 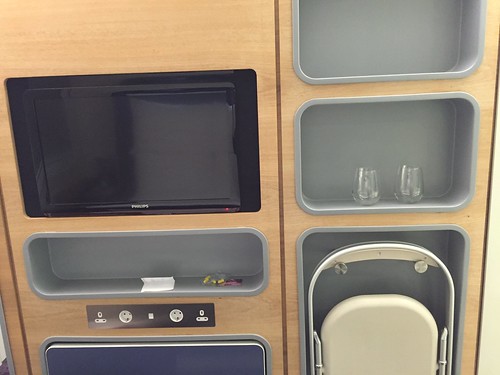 It needs to be flat to the wall, or you’d never get your luggage in the room. 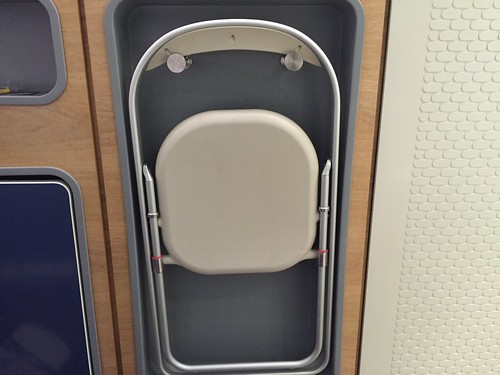 This is the Standard Cabin where my sister slept: It feels very nautical/spaceship. Two people could sleep in here if they were very fond of each other – or two kids. Tripping over luggage might be an issue if each had a large case, but Holly fitted in just fine on her own. 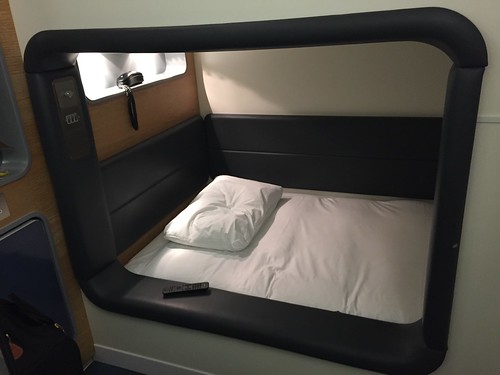 The bathing area is substantially smaller than in the premium. 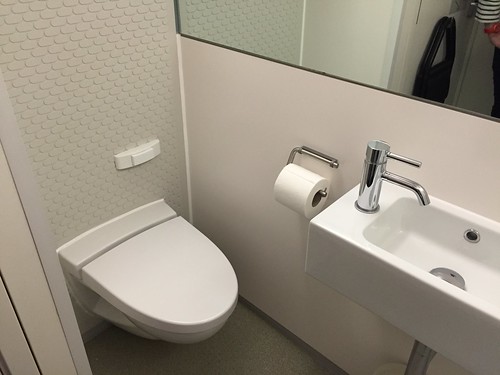 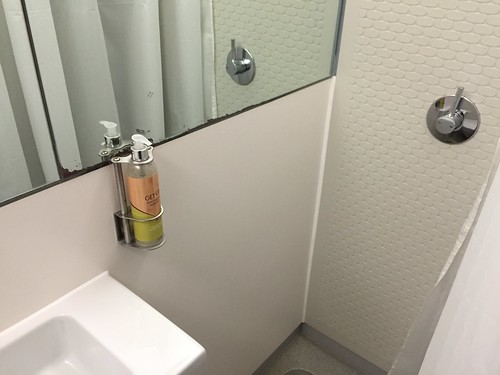 Complimentary hot drinks  (tea, coffee and hot chocolate) are available to all rooms 24/7. The menu has basic breakfast options, and snacks available, although those are limited to whatever can be frozen and then microwaved, and you’d better like carbs – a LOT. That being said my pizza was absolutely delicious – if you thought of it more as crispy hot bread with cheese and tomato, rather than a pizza. 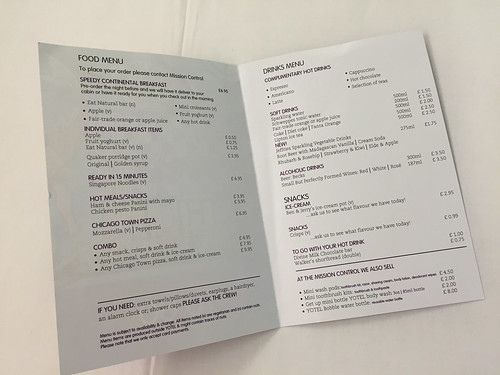 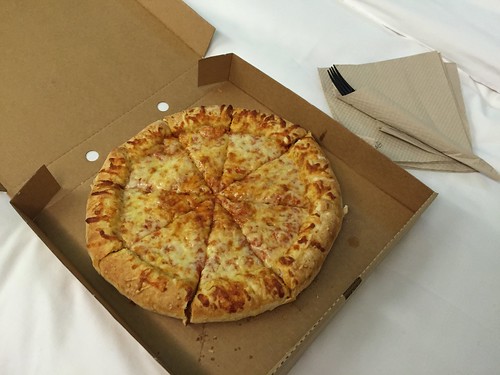 I would stay there like a shot again – and if I travel through Gatwick Airport again at unsocial hours then it’s a no-brainer, given how expensive cabs are out there. Fingers crossed for a Yotel at Stansted.

At Heathrow, the Yotel is in the Arrivals Hall at Terminal 4, which is open 24 hours. If you are arriving by plane you need to go through customs/baggage reclaim as Yotel is not airside.

A word from the now-wise: the last tube that stops at Terminal 4 leaves central London around 10pm. Any later than that and you need to get off the tube at Hatton Cross and take a bus or Uber to the terminal (don’t stay on to the stop for Terminals 1/2/3, as Ubers aren’t allowed to pick up from there, and the buses are only every 30 minutes. As we discovered.)

Sasha and her sister Holly were guests of Yotel Heathrow in April 2016. Sasha paid £4.95 for her cheese & tomato pizza

The Hat Club. Hats to hire for Ascot, The Derby, Weddings & anywhere else you may need to go…

A Week in LLG, from rose drinking to popsicle licking…

Health: the best massage in London by therapist Fiona Keane

Really interested to read this. I’ve booked a family room at the Manhattan yotel for a break with my husband and daughter later this year – I was really struck by theclever use of space (yes the rooms are small but there’s lots of lounging space for a teenager to go and find a little time to herself) and the fact that it looks so wonderfully clean. Next time I’m flying from London I’ll definitely try a cabin.