The Hat Club. Hats to hire for Ascot, The Derby, Weddings & anywhere else you may need to go… 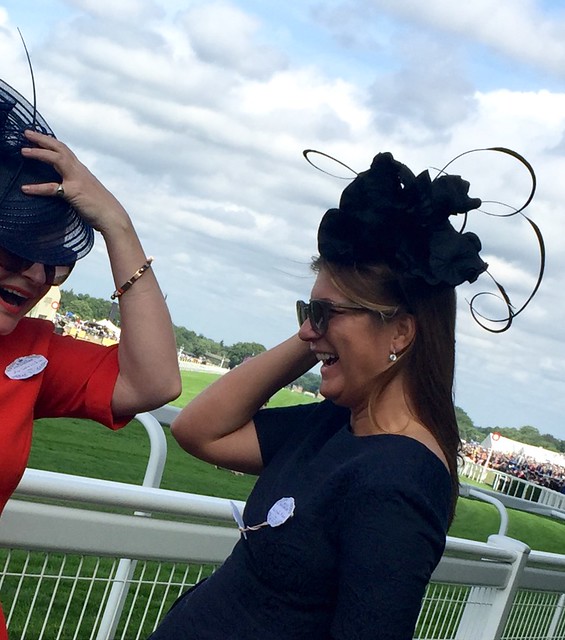 The subject of hats does seem to bother British women quite a lot: what kind of hat to wear to what forms a large part of my reader mailbox from about mid-May onwards. And, given that we British do like to sport a titfer on as many occasions as possible, from Great Aunt Mildred’s funeral to baby George’s christening, with umpteen weddings along the way, hats can become quite an expense. Even if you are investing at the lower range – say in John Lewis’ Millinery department, The Outnet, or ASOS.

So let me introduce you to the brilliance that is The Hat Club’s hire service. Their raison d’etre is to hire excellent millinery at affordable prices, and I first wrote about them back in 2013.

I am thrilled each time I see the team at Ascot each June to hear that so many of my readers hire their hats from The Hat Club – including Brigitte, long of this parish, above at Ascot last year in a ravishing Gina Foster that she had hired from them, using their car park pick up and drop off service.

Usually I am a bit sceptical of hat hire places: they seem to have sprouted mainly in the Home Counties, and specialise in the kind of creations more usually seen on Hyacinth Bouquet-ish mothers of the brides, and most hat hire services do not showcase their collections online. Fear not: the lovely girls at The Hat Club have a vast collection of hats and lovely headpieces by milliners including Phillip Treacy, Emily London, Justine Bradley Hill, Gina Foster, Joanne Edwards, Bundle McLaren, Emily Baxendale, Juliette Botterill, Emily Baxendale, Laura Apsit Livens, Vivien Sheriff, and Rosie Olivia, many of whose hats I have worn in the past, and every available hat is shown in glorious technicolour on their site.

You can pick up hats from the studio in London, send a bike or, at the Derby and at Ascot, collect and return them at the racecourse. If you are hiring for a wedding/other occasion, you have the hat for the weekend. For the races, it is a 24hour hire: you can collect the night before or the morning of.

(The Hat Club tell me that the drop-off is more helpful as it means people don’t have to rush home to get their hat back to the studio but the racecourse pick-up service is helpful for people hiring who are not London based.)

Average hat hire cost would be around £65 but they start as low as £35 and go up to £120 for a Philip Treacy. (And all their hats are Ascot Royal Enclosure approved.)

I tested out The Hat Club’s pick-up and drop-off service at the Investec Derby at Epsom a few years back and it was ease personified: I chose a few options that would work with my outfit, and emailed them over the night before.

On the day I called from the car on approach to the racecourse and met Harriet near the entrance. (She was easily identified by her large hat box.) I tried a few on, and that was it: Bob’s your uncle: I had the loan of a splendid blue hat (above) by Juliette Millinery for the day.

The Hat Club will be operating a pick-up and drop-off service for customers hiring a hat at both The Investec Derby Festival and Royal Ascot this summer.

Looking after Lettice: A primer in Avoiding Parasites and Other Nasties

Pick Up and Drop Off service for both the Derby and Ascot is extremely useful as it means you can leave your hat safely with The Hat Club before heading out for dinner and drinks at the end of the day.