On checking out for a week… 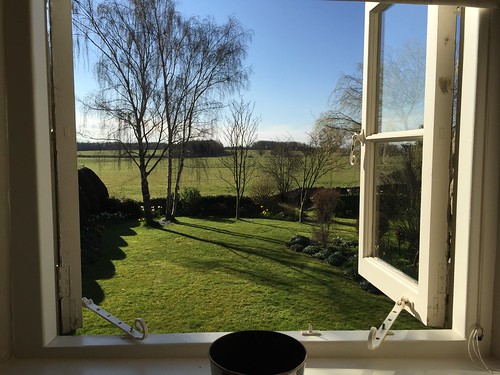 (About as close I got the countryside last week – the view from my bedroom at Old Walls cottage, Thyme, in Gloucestershire.)

Whilst I seem to catch more than my fair share of hideous colds, (you know, the ones that turn you into a running river of snot, leaving a trail of scrumpled tissues in one’s wake), they’re never particularly serious. I’ve never had proper flu either. That is, until last week, when I came down with my first ever attack, which knocked me – and my sister – out for the best part of a week.

So I apologise for the complete break in communications. I have never, ever gone more than a day without lifting the lid of my laptop. This time it was five days. My sister and I caught this delightful bug from my mother over Easter – she has been ever more ill than the two of us put together, as she developed appalling nausea and vomiting for days – and by late Tuesday night last week we were very unwell. I don’t really remember anything much about Wednesday.

I had driven us both to Thyme, a delightful small hotel and cottages on the Southrop Estate in the Cotswolds on Tuesday lunchtime. Old Walls, our self-catering cottage had a neat bedroom on the first floor, and a lovely attic room above. We soon realised that we would be retiring to those rooms pretty smartish. We lay in our beautiful beds, me on the top floor, Holly on the first, a small dog curled up on each crisp duvet, and sweated, shook, chilled, fainted, groaned and cried for 36 hours. 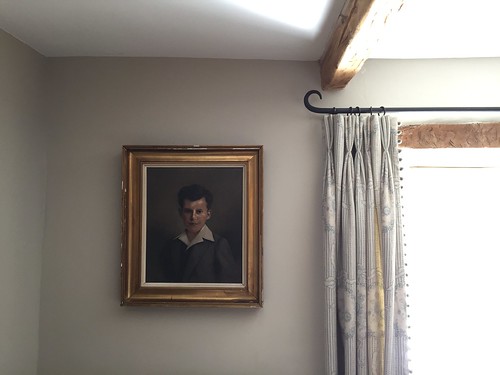 The low point was sitting crying on the floor of the stylish walk-in shower on Thursday morning  – as basic hygiene required that I do something about the matted nest on top of my head – because I couldn’t summon the energy in my aching limbs to stand up under the shower head.

I’d left London the previous Wednesday to pick up the glorious Tesla S to test-drive it for eight days, on a complicated route all over the Cotswolds and South Northamptonshire. It was due back at Tesla HQ in Heathrow last Thursday so I tried to summon the energy to return to London.

Just about able enough to gather our possessions, I managed to pack the car and stuff in bags, sister and dogs, but it became clear about five miles down the road that I had about ten more minutes left in me before my imminent collapse. My sister wasn’t much better. The only perkiness in the Tesla was courtesy of Lettice, sitting on Holly’s lap, and whose innate bounce remained undiminished.

Thank god for Expedia – a quick search showed a free room in a dog-friendly pub a few miles away. Reader, I booked that room as fast as my stubby fingers could bash out the letters on the touchscreen. We checked in and were both in bed and asleep ten minutes later. We woke for an hour or so at six and ate a few mouthfuls of food, and then fell asleep again. I think we were both at the flu stage where we were just so exhausted we couldn’t so anything other than pass out – much more bearable than the preceding hours of limbs aching so much we were crying, and fitful napping.

I’m so glad we didn’t go back to London, because we were both so much better on Friday morning – a little shaky and wan, but definitely now in the chest infection, no voice, hacking cough and snot phase, rather than the curled up in a ball and shivering stage.

I’d hoped to retire to bed in London on Friday afternoon but fate intervened – it always bloody does, doesn’t it? Within an hour or so of getting home, Lettice developed some random allergic reaction, causing her forehead to break out in spiky lumps. She looked like a Klingon. 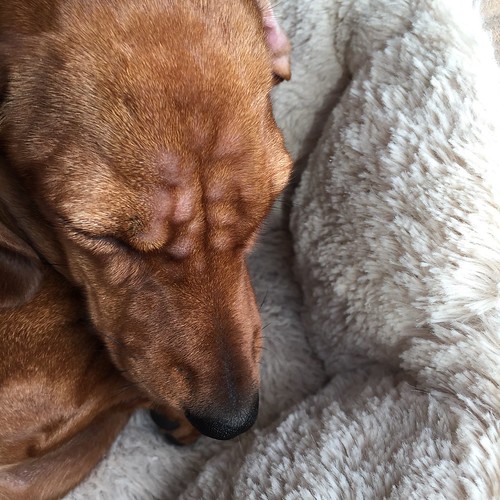 A rush to the vet, one hour, 3 anti-histimines and £62.95 later, the little pickle was returned to me de-spiked. But adrenalin had done for any hope I had of sleeping and I tossed and turned in bed that night until I eventually dropped off in the small hours. Saturday was another blur – I think I slept all day and Sunday pretty much the same.

I had to go to Yorkshire yesterday for work and was still a little wobbly – I haven’t really eaten anything much for days, but I feel SO MUCH BETTER today. And my advice if you feel the aching limbs  and fierce headache thing, get yourself to bed as quick as you can.

On the importance of friendships…

Thank you! It has been very miserable LLGxx

Oh my goodness, poor you and poor Holly. It’s absolutely horrible when you feel like that. I do hope you’re both feeling better now. How nice that you had each other though. Imagine having to stay somewhere strange when you’re ill all by yourself?

Have you thought about the flu jab? I also used to get every cold going around, usually with a hacking cough that went on for days, but since I’ve been getting the flu jab every autumn I literally sail through winter. It definitely protects me from colds as well as the flu and my sister says the same. I even got one Pharmacist to agree that it did one year, but of course the medical profession keep it very quiet as the common cold is a bit of a cash cow – think of all those tissues and medicines we buy each time.

Holly gets the flu jab because of her compromised immune system – MS – and she still got it! We could not believe it. I guess it was some evil mutant strain of anti-Wilkins flu! LLGxx

Hi there
Looks like all of you had a rough go. Glad to hear everyone including the little horned one are on the mend.Please keep your strength up during your upcoming extended travel as some bits of that dammed flu has a tendency to overstay it’s welcome and attempts to make a comeback. . BTW, looking forward to your feedback on the Tesla!
Be well and all the best
James

Thanks James! I have to say I still feel distinctly under the weather, which is far from ideal, but most of all I’m glad that the tiny dog is better. God I was worried. (I LOVED the Tesla!) LLGxx

Hope you’re feeling better! I had proper flu for the first time last January, knocked me out for 6 days too – I have never felt so awful. I’ll never again complain of having the flu when I just have a cold, the real deal is horrific! I practically ran to the chemist for my flu shot this winter!

The flu is a killer. I am very happy to hear that you are feeling better.

Thank you! I never want to feel like that again! LLGxx

I’m glad you’re feeling better! I had the flu and couldn’t move an inch for a week. Hope you will get better. Keep up!

Oh you poor things the real thing is awful. Only ever had fly once. Never really get sick so could not believe my body could do that to me – couldn’t believe you could be that sick and not die!!!. Take it easy, it takes a week or so to really depart your system. Soup and early nights are the thing.

Oh no what a shame you were so poorly! I hope you’re feeling better now! The best thing for the flu is hot toddy and putting Vix on the soles of your feet!

Stunning view from your window.

Hope you are feeling better now – glad you had Lettice with you to keep you in good spirits. Get well soon!