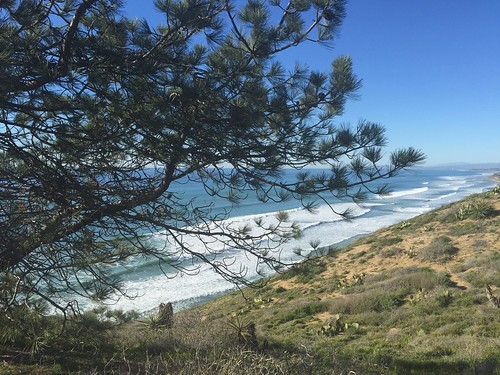 California’s glorious parks, reserves and canyons have become some of my favourite places in the world.

As I wrote, back in 2009 during my epic road trip around California, if I had been told that a stay in a sybaritic hotel was to be interrupted by a two hour hike, however beautiful the surroundings, I’d have pleaded an imaginary knee injury, stayed in bed, and worked my way through room service.

I never used to be like this. I did the Duke of Edinburgh’s Bronze & Gold Awards at high school, which involved camping, orienteering & strenuous two or four day hikes over the North York Moors.

On my GAP year I powered up, through and down 12km of interior rainforest to cross Pulau Tioman in Malaysia in 90% humidity.  But, once I started university, I reverted to my natural state: prone in bed with a novel.

The first inkling I had that I could enjoy exercise in adult life was when I bought a bike in London. Gradually my tentative 5 min outings became half day expeditions down the London canal paths. Then I moved to Manhattan, bought another bicycle and became one of those boring cycling evangelists. (Yes – it’s so much quicker, yes – you can bike in four inch stilettos).

Bicycling has taught me not to be scared of exercise, that I am naturally capable of not collapsing after five minutes of exertion. That it was just exercising in a group where people judged my inadequacies & malco-ordination that I loathed. And that Gym and Games were the work of the devil.

So that brings me to California and to hiking. a friend forced me up the Santa Lucia mountains above Santa Barbara, and I loved every minute, so when the Hotel Bel-Air suggested a morning hike in the foothills of the Santa Monica mountains in Will Rogers State Park I jumped at the chance. (Not least because the hotel’s transport to the park was in a Bentley Coupe.)

And that was it: I was hooked on hiking. (Although I laughed quite a lot when my friend Rollo, a recent Los Angeles transplant, looked at me last week as though I were mental and said: it’s not hiking, it’s WALKING.) 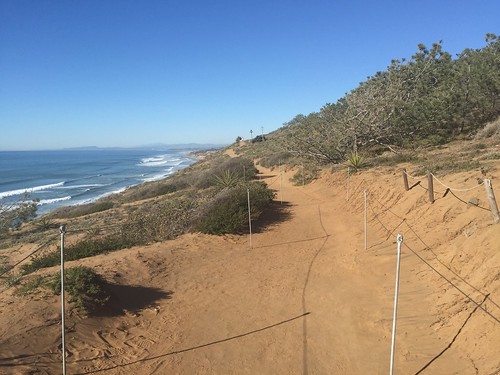 My new favourite hiking spot isn’t in Los Angeles, but further down the coast. A few years back, I spent a weekend in Carlsbad, a coastal resort about two hours south of LA, and about 40 minutes north of San Diego.

I had nothing to do, bar eat, sleep and read, so naturally I looked for somewhere to go hiking. The concierge at the Park Hyatt recommended Torrey Pines State Reserve, which is about 25 minutes from San Diego (it is located within San Diego’s city limits), and he was absolutely right: I loved it so much that there’s a photo from it in my cookbook in the Food to eat in the Outdoors section. 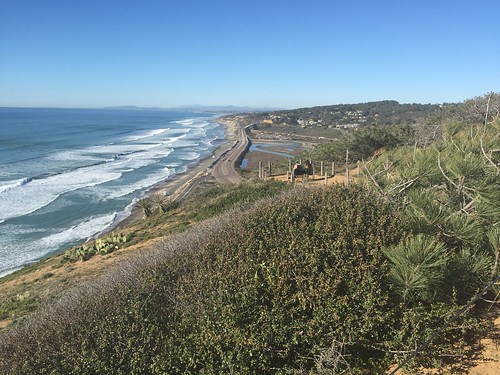 Of the 279 units in the California State Park system, only 16 have reserve status and Torrey Pines is one of them: it’s 2000 acres of maritime chaparral, including the home of the rare Torrey pine, miles of unspoiled beaches, and a lagoon that is vital to migrating seabirds. The Torrey Pine, in particular, is of specific scientific interest, and there is a great account of the efforts to save it, and the reserve, for the nation here. 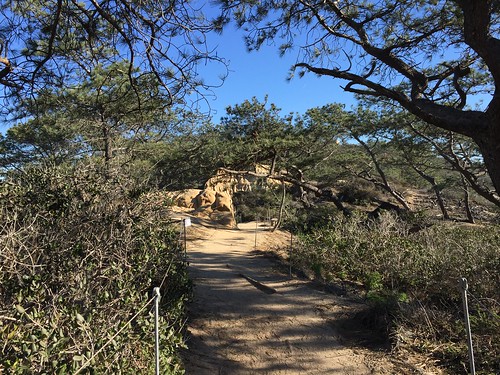 There are several trails up on the mesa above the ocean, and it’s perfectly possible to run two or three of them in one outing, depending on time. I was a bit pressed, as I was expected shortly in San Diego, and picked the first (and one of the easiest), the Parry Grove Trail, which is circular and not too arduous – it makes a glorious walk too, if you are so inclined. It takes about 30-45 minutes, depending on fitness and how long you want to linger, looking for dolphins in the ocean far below the cliffs.

My first piece of advice for Torrey Pines is to not park in the large car park just by the Ranger station where you pay $12 to enter.

(Yes, ouch, hiking doesn’t always come cheap, but if you’re not alone it’s not too punitive, and I remember 2009 when California was running out of money, and some state parks were closed, so better that we pay and they remain open.)

Instead of immediately turning left into the large parking lot, carry straight on up the hill, past all the walkers puffing away up the stretch of Tarmac with only a view over the freeway.

It’s a steep road, and at the top, sharp right, and there’s a parking space for about six cars just there on the left, a few steps from the first trailhead (the Parry Grove Trail). Of course, if you love slogging up boring old Tarmac, be my guest and park at the base, but I’d rather save my puff for the beautiful trails.

I’ve annotated this handy map for you: 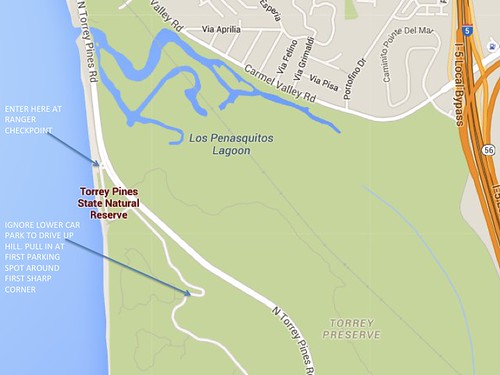 My second piece of advice – wear running pants with a zippered pocket. I changed in the upper parking spot (sorry to anyone whose retinas were scarred by the flash from my milk-white tum) and realised I had nowhere to put my car key. Fortunately, I am v good at improvisation: 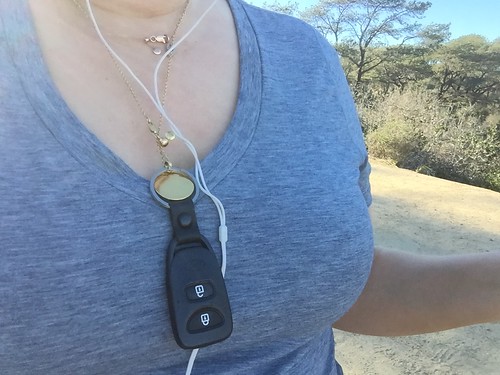 Yes, that is the key fob hanging from my Monica Vinader necklace. I would also advise a baseball cap, as the sun is a lot stronger than you think, even on cloudy days. Of course, mine was sitting in the trunk of my car – back in London. 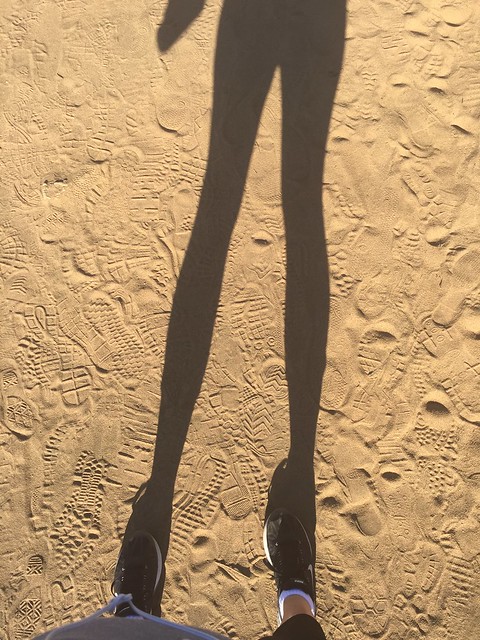 I bought some new trail running shoes – they have special grippy bases to stop you going arse over tit on scree and slopes, but they didn’t arrive from Amazon in time (grrrrrr), so I just wore my everyday running Nikes, which were fitted on me, after a gait test at Nike in Covent Garden (Thank you to my friends at Caudalie, who arranged this.) 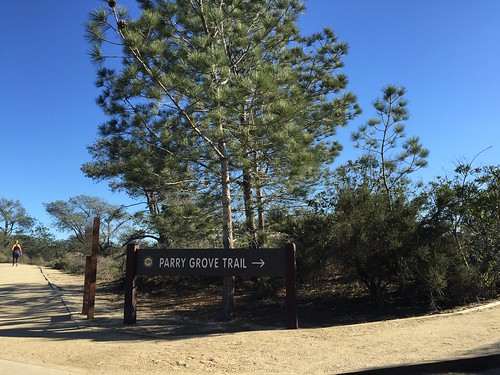 The Parry Grove Trail starts with a lovely run down 118 steps, which isn’t just fun, but a good mental challenge too. 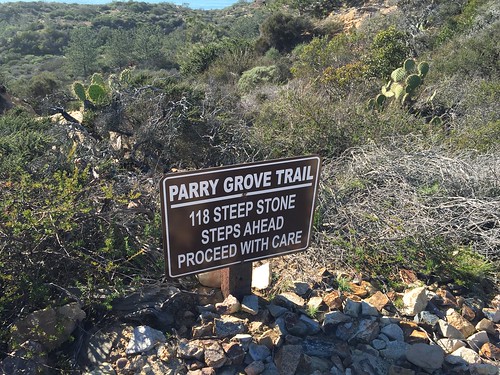 It then carves out through the scrub, and up towards the bluffs overlooking the ocean. 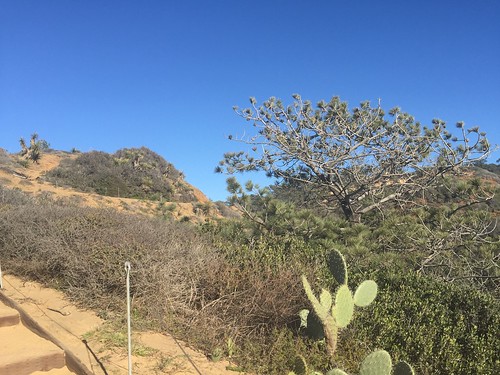 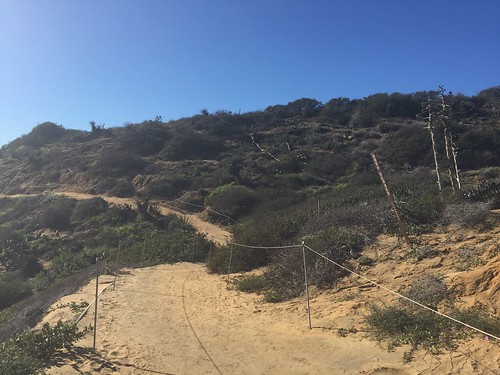 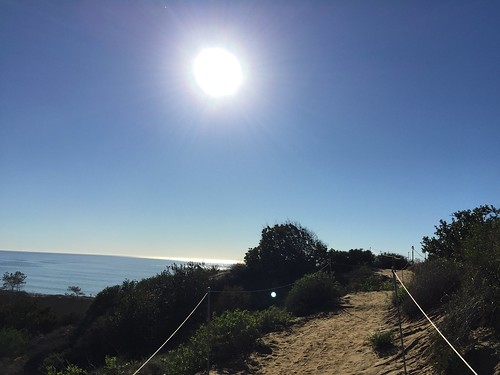 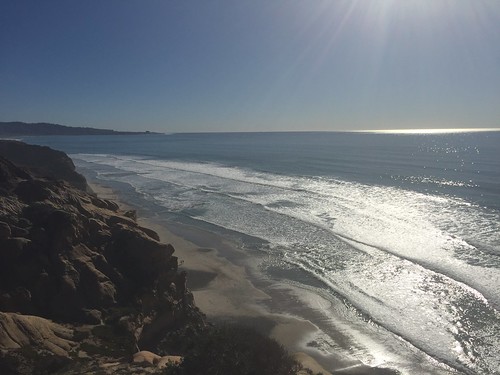 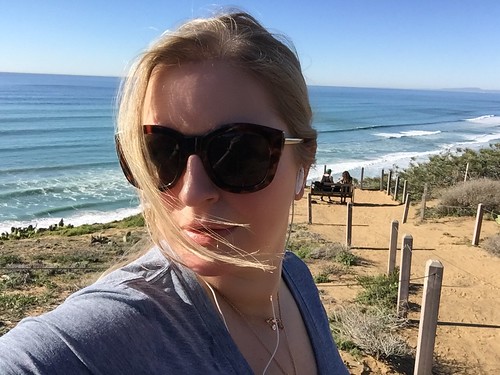 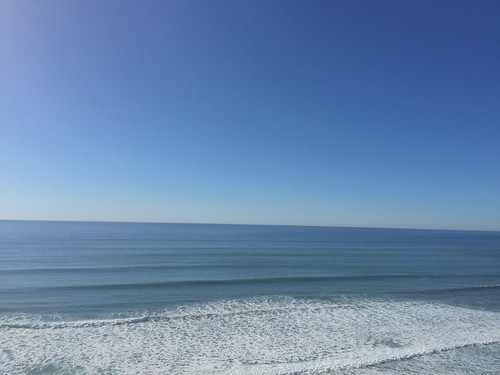 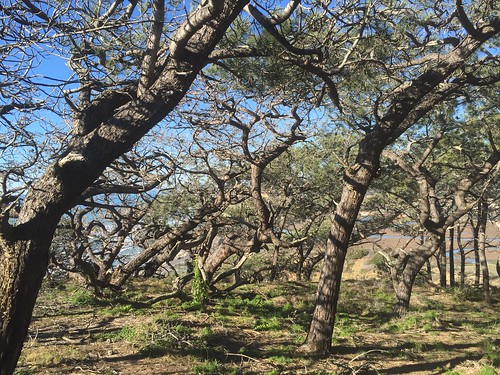 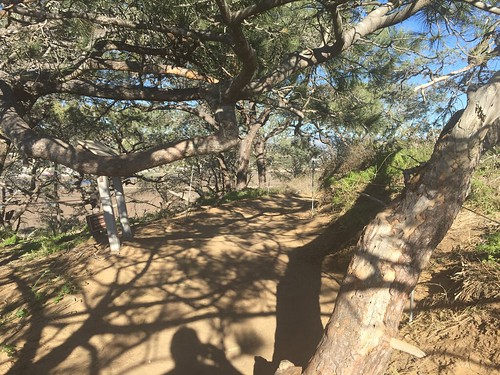 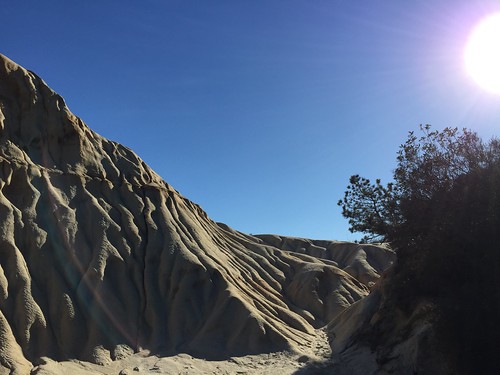 Sadly I forgot the trailrunning golden rule: what goes down must also go up. Remember this from the beginning of the post?! 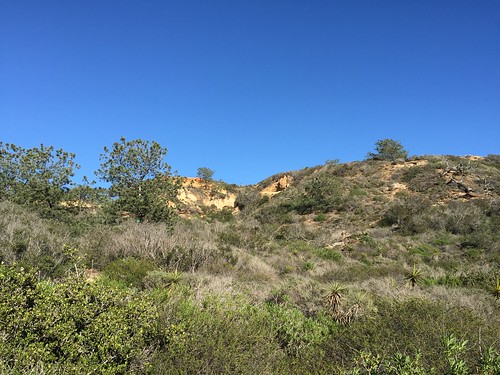 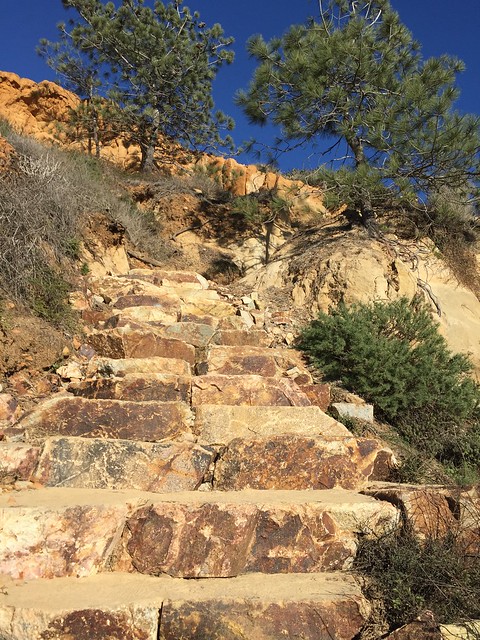 Reader I thought I was going to pass out. Brick red, legs shaking, puffing like a grampus, barely able to even lift my arms to drink water, I tottered back down the road to my car. I couldn’t be bothered to change out of my running gear – it seemed like far too much work, so I sat in the car with the aircon roaring for five minutes before reversing out and back through the reserve towards San Diego and the Hotel Del Coronado. 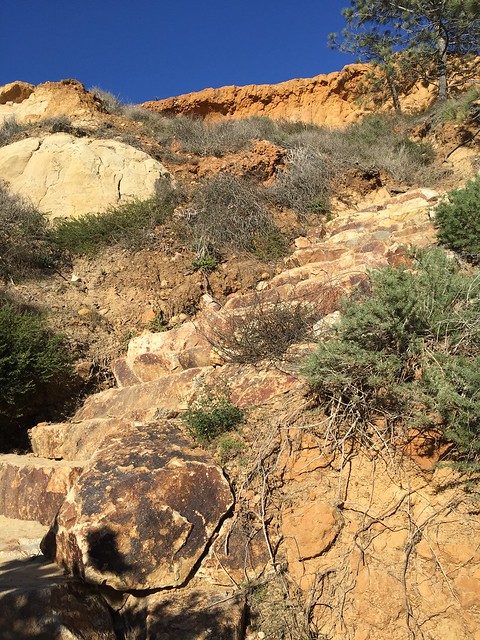 Exact closing time of the day is posted at the South Beach parking entrance.
All vehicles must exit the Reserve by closing time each day.

Dogs of the Day: Lunch with ALL of the Dogs at the Dogs Trust Micro Chippy Pop-Up

Instagram: A day in Paris with my best friends

Thanks for your great reviews!

So lovely to see blue skies! The trek looks amazing – another one for the wish list.