Travel: A week on the West Coast. California or bust 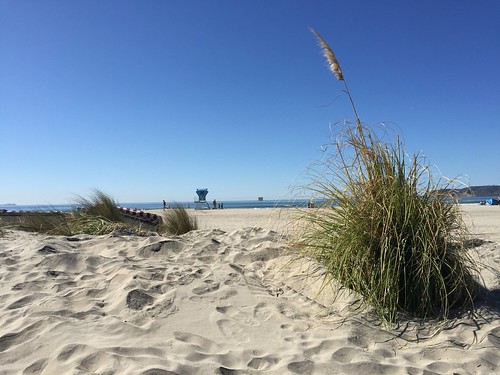 (The beach at the Hotel Del Coronado in San Diego on Saturday.)

I arrived at LAX from Heathrow last Sunday evening around 7pm. It was dark, bloody freezing and extremely windy. Turned out I’d caught the tail end of an El Nino storm: as I drove my tiny rental car towards Los Feliz, I could see palm fronds in the gutters, and small trees broken and collapsed across cars, sidewalks and front yards.

The weather forecast had said that it would be colder than usual for the beginning of February – somewhere around 12C, but that it would warm up towards the end of the week. But goodness, it was sharp outside, in that way that hot places can be at night, with the particular kind of cold that gets right to the bones.

That night I stayed in Los Feliz with Rollo, one of Holly’s and my oldest friends – we met when we were fifteen and sixteen respectively on the set of Guys & Dolls. Rollo could act and sing. I mimed.

Sitting in the back row of the theatre, I told him all about my sister who was joining the school a year later. Twenty years or so later, we are all still the best of friends: Holly and he even lived in the same house at university.

Now he’s out in LA being extremely important in the entertainment news industry, but he’s not too grand to let me borrow his spare room. And darling boy that he is,  he’d gone to a very smart bakery and bought me croissants and artisan bread for breakfast and special patisseries in origami-like boxes. 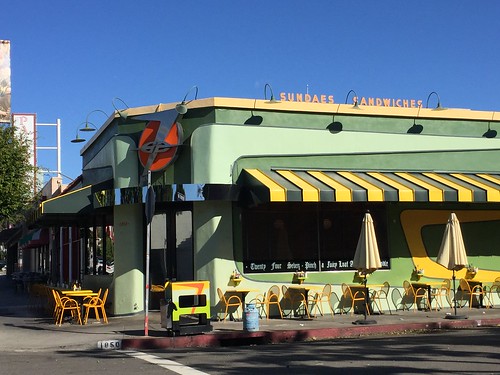 Next morning, bludgeoned by jetlag and awake by 5am, I ate those croissants very, very early, unpacked, packed and packed again, and headed out to Fred 62, just around the corner on North Vermont Avenue, 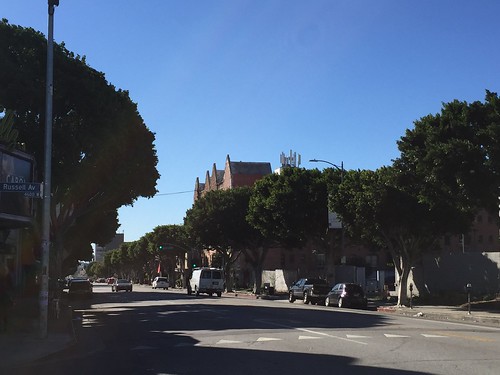 for a mid-morning second breakfast. I’ve been there often before: it’s a classic diner, of the kind that is now populated by hipsters, old timers, and tourists like me. And I enjoyed the novelty of walking to breakfast. It is true: no one walks in Los Angeles. 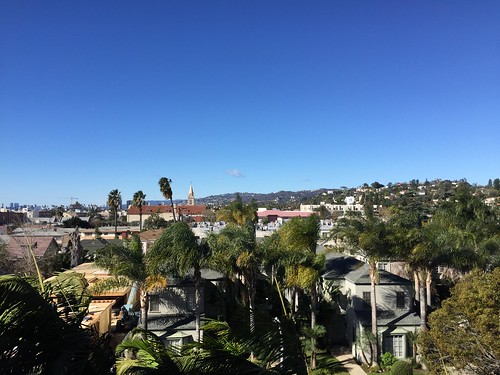 (The view west across Los Angeles, from Rollo’s rooftop.) 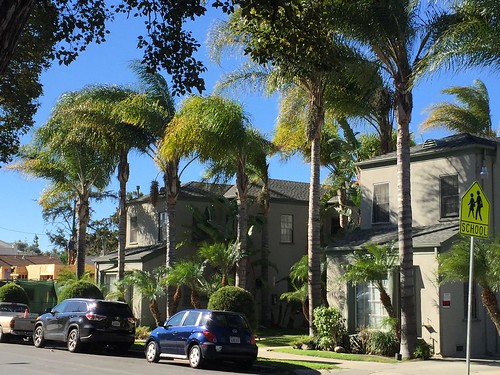 Stuffed with heuvos rancheros, and sloshing slightly from the bottomless coffee refills, I drove out west to Santa Monica to check in at the Fairmont Miramar Hotel & Bungalows, which sits in splendour on the ocean front. 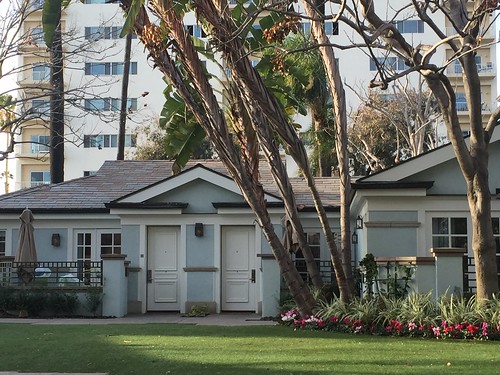 (The fabulous private bungalows in the grounds of The Fairmont Miramar)

It’s amazing how quickly the time goes when you are away from home. I’d marked the day down for some writing but, by the time I’d eaten my eggs, driven the 45 mins to the coast, stopped off at Vons supermarket for fruit and cheese, (it’s no fun waking ravenous at 5am in a hotel two hours before breakfast opens) and eaten a third breakfast at Swingers diner (I do love a diner), 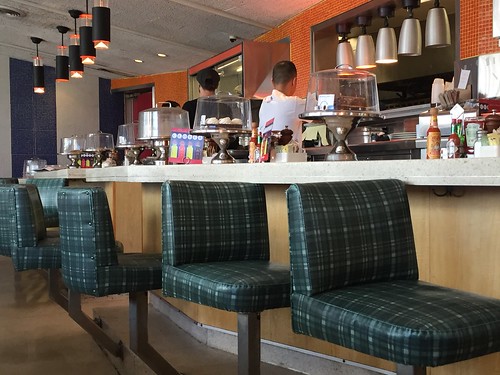 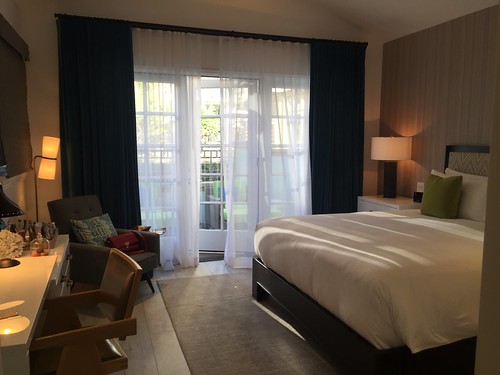 (My bungalow at the Fairmont Miramar)

The Fairmont occupies prime Santa Monica real estate – within walking distance of pretty much everything, so I headed to the 3rd Street Promenade shopping area two blocks away to look for a coat.

I honestly thought I had prepared for all of the weather: I’d checked in my big case, and a smaller bag too, with everything from cashmere sweaters and ankle boots to denim shorts and beach dresses, but my green army jacket and cashmere plane blanket were not keeping me the slightest bit warm.

Drawing a blank in J Crew, and in Banana, I wandered into Max Studio, and rather unexpectedly struck lucky with a navy blue jacquard car coat, marked down about five times in the sale. Reader I wore that coat out of the shop, and into the Apple store down the street, where I would then spend the rest of the day – and the evening, dealing with my iPhone issues (broken front camera and buggered battery life). 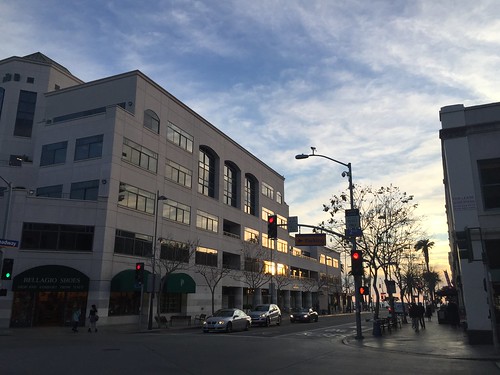 Duller than dull, but at least I got to wander down to the oceanfront whilst I was waiting an hour for my walk-in appointment, and take a zillion near identical photographs of the glorious sunset. 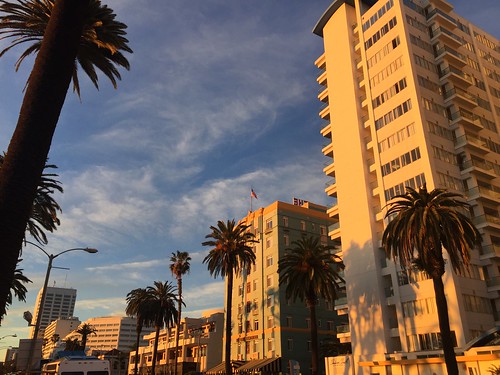 And three cheers for Gabriel, who wrote off the cost of my cracked screen, and ended up just giving me a brand new phone, even though I was only 42 days from the end of my warranty. 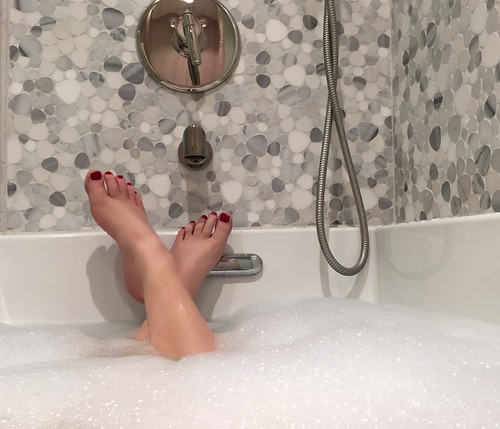 And that was my first day in LA. Mainly memorable for being so cold: in the end I walked 12000 steps on my Fitbit around Santa Monica and had to spend an hour in a deep, Molton Brown bubble-laced bath warming up on my return. 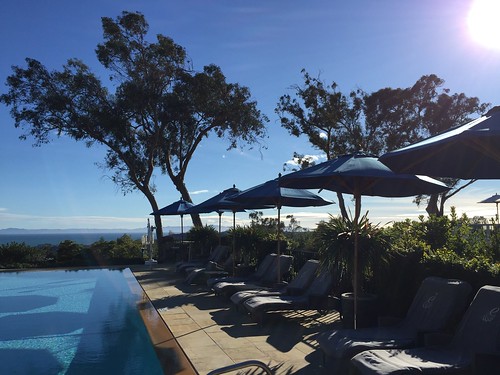 (The pool at the Belmond El Encanto. Don’t be misled by the sun. It was COLD.) 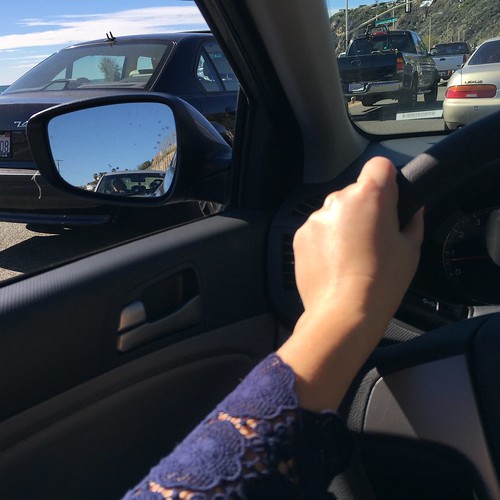 (I don’t mind traffic jams, when you have the Pacific ocean to look at)

to stay at the Belmond El Encanto resort hotel for two nights. 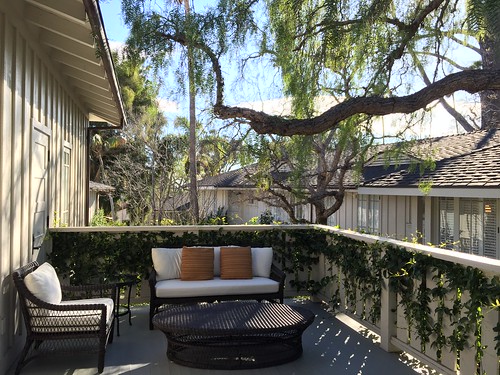 I spent most of the time there swimming in that sensational saline pool, writing on the beautiful private terrace of my bungalow (above), bar a jaunt to the excellent Farmers market for more fruit and cheese, and dinner with my friend Lisa on Wednesday. (I was so tired on Tuesday that I fell asleep at 1830hrs and didn’t wake up again until 4am.) 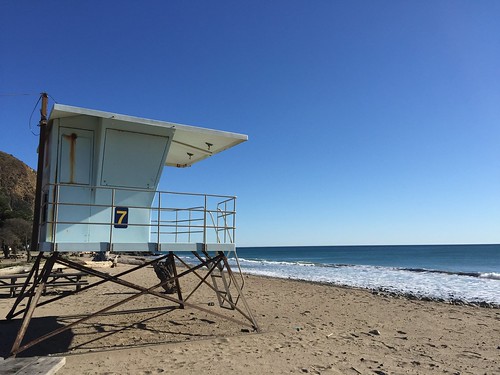 Thursday I drove back down the PCH, stopping briefly to eat lunch in brilliant sunshine on a deserted beach at Sycamore Cove. (Finally! Sun! HOT sun!) 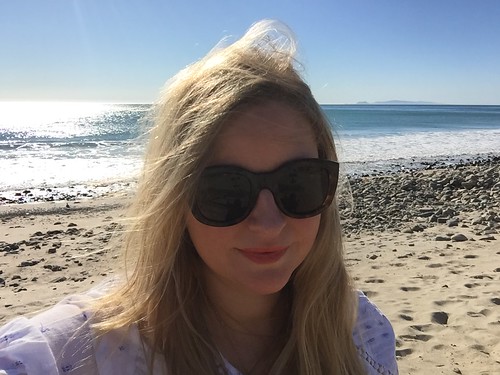 (Blissed out sunshine face on the beach)

I spent the night at a motel turned hotel (although it’s really still a motel) called Farmer’s Daughter, right by LA’s farmers market and The Grove, 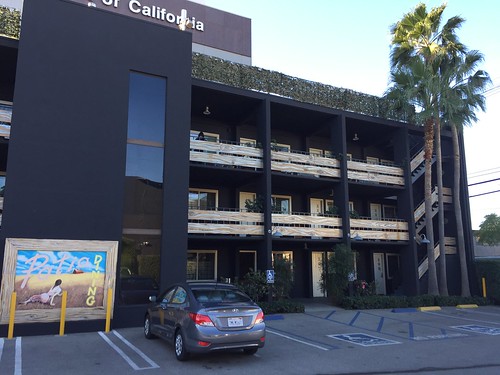 and had dinner with Rollo, Jamie, Thomas and Fredric on the roof terrace at Soho House West Hollywood. 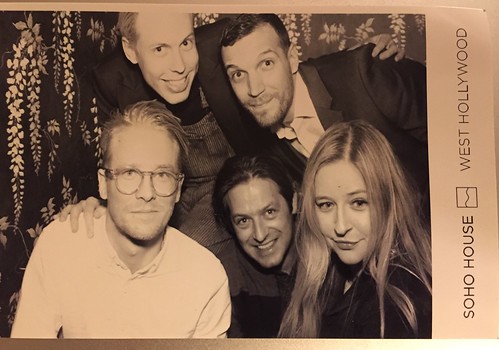 We had a lovely dinner, but I was still so pole-axed by jetlag – I’ve woken around 4 or 5 every single morning, that I was back at the hotel by 9pm and asleep half an hour later. 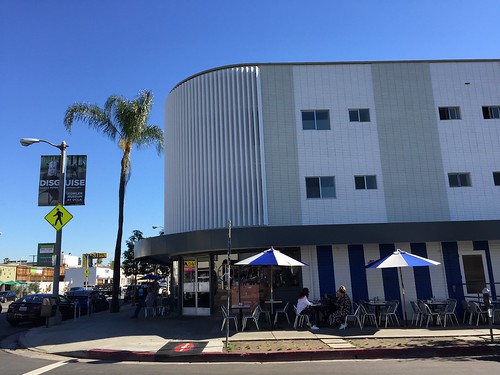 Friday morning I realised I was just around the corner from the Beverly Hills branch of Swingers where I used to eat the Early Bird Special after hiking Runyon Canyon when I was here back in 2009. So another diner breakfast for me. YUM. (I drew the line at $12 eggs in the hotel when I could eat more for less five minutes away.)

I think it’s fair to say that this trip has consisted mainly of my waking insanely early, posting a lot on Instagram, eating huge breakfasts, skipping lunch, eating cheese at random points in the night, doing lots of driving, and falling asleep by 9 most nights.

My plan was to write a huge amount but there just hasn’t been any clear space by the time I’ve dealt with work email, and done all the driving. Not that I’m complaining. Oh no. California is one of my all time happy places and I’m soaking up that vitamin D like a plant starved of sunshine. 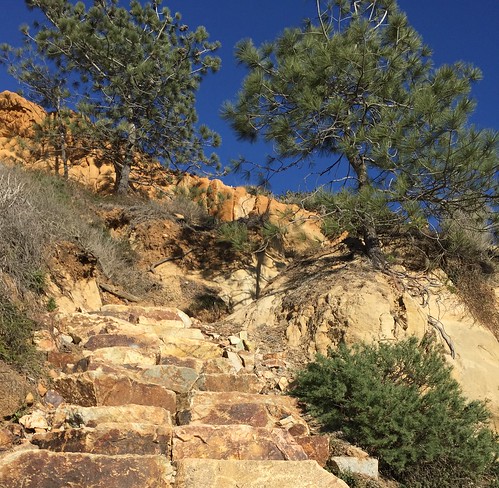 And now I’m in San Diego. Driving down early yesterday to beat the Friday afternoon traffic, I stopped off at Torrey Pines State Park, one of my favourite hiking spots, did a lightning change into Lycra (sorry to the man parked next to me if he ever reads this – you did look a bit alarmed at me standing in the parking lot in my knickers), and did 45 minutes of trail running, before heading (coloured a most alarming shade of tomato from the exertion) to the Hotel Del Coronado, one of America’s oldest wooden hotels (1887 – it’s a registered historical landmark). 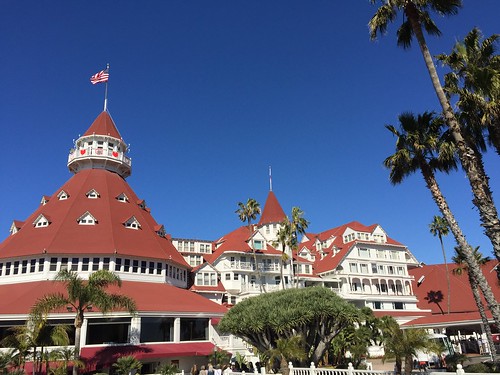 It’s rather lovely staying in such a huge resort hotel, which is clearly and rightly held in huge affection by generations of holiday-ing Americans. And it’s on the beach. Heaven. I got up early this morning to swim laps, 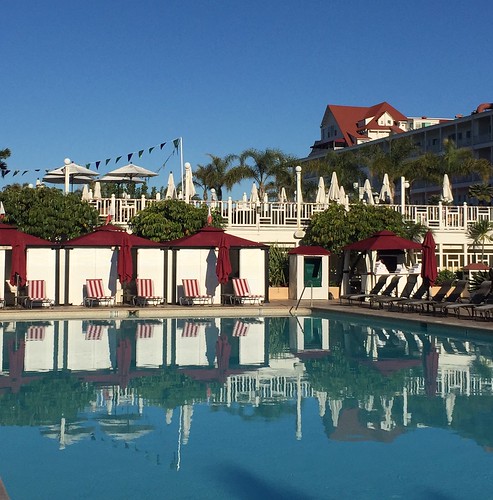 and have been happily writing all day, breaking only to lunch on the MOST enormous two scoop, double brownie, fudge sauce-drenched, almond-garnished, cream-topped ice cream sundae from the hotel’s ice cream parlour. Even though I had skipped lunch proper in order to treat myself, I could only manage less than half. WHERE do people fit it all in? 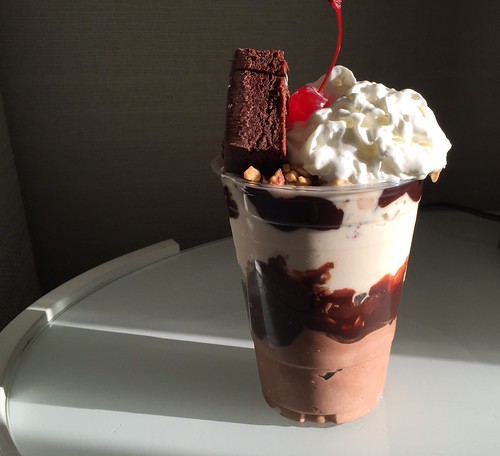 Tomorrow I’m driving the three hours or so back up to Los Angeles, hopefully fitting in another hike en route, before spending the afternoon at Murad with my friend MK being prodded by beauticians.

I’m staying at the InterContinental in Century City overnight, before heading out to Palm Springs and the Ritz-Carlton Mirage on Monday afternoon for the real purpose of this trip: I’m actually out here to test-drive the new Bentley SUV – the Bentayga in the desert for two days.

I’m flying back on Wednesday night and, with luck, will have Lettice back in my arms by Thursday evening. Joy will be unconfined.

Beauty: Excellent Make Up & Hair Products in my Travel Bag

Dogs, My Life in New Jersey, My Travels

Californian Adventure, My Travels, My wardrobe

Your trip sounded amazing enough, then I reached the reveal of your raison d’être (raison d’travel?)!!! Oh, give that Bentayga and extra pat on the hood for me won’t you? x

Great writing. Where did you dine out in Santa Barbara?

Oh God, you poor thing – what you have to do in the name of work, HAHAHAHAHA.
The Hotel Del Coronado looks lovely, so does its pool & especially that ice cream sundae – yum.

Visited the Coronado last year. It -and the beach – are truly lovely. Although the $30 parking for non- residents less so. Not at all important but I was surprised to find out my two companions did not know that “Some Like it Hot” was partially filmed there. Anyway, enjoy your test driving. Jealous? On not in the least…… and looking forward to reading your review.

California looks good on you! Can you let us know who made the lovely lace garment we catch a glimpse of on the drive up the PCH to Santa Barbara?

Pictures are amazing. I need a day or two off and escape my work. I will love a ice cream on beach.

Sasha!
Oh how I love California! Especially San Diego! La Jolla area, so beautiful and such nice people!! I have been there for work-which was a pleasure! and on Holiday…You are so fortunate to be able to spend a few days in each unique city…Nicely done!

Let me know how you get on with the Murad products? I have had some success with them on my tetchy rosacea-y skin. Would be interested to know which you liked/were recommended!