London: Afternoon tea at the Charing Cross Amba Hotel with my godson 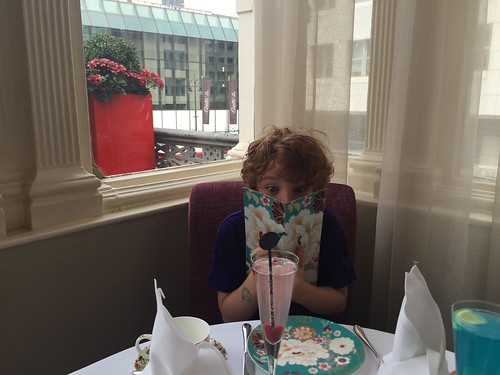 One of the absolute hands-down loveliest things I did this summer was to take my seven year old godson to afternoon tea at the Amba Hotel in Charing Cross. 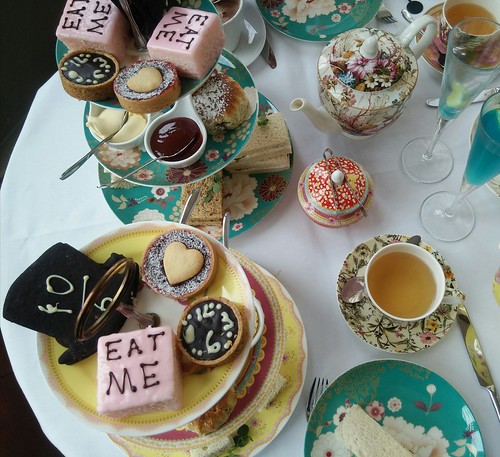 I knew the hotel of old as, when I was at boarding school in Kent, I used to come into Charing Cross by train to meet my mother on the way home, and we occasionally had tea there. But not, I hasten to add, on a scale like this. 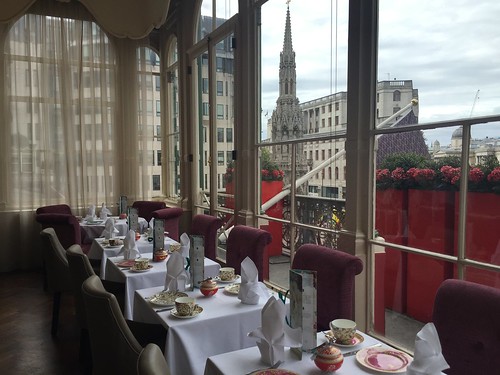 Sometimes small wriggly boys can be a bit overwhelmed by acres of linen, clinking china and that particular hush that can fall in smart hotels, punctuated only by the tinkling of a piano and a low murmur.  The Amba was perfect – afternoon tea is served on a glass enclosed terrace, separated from the main dining room, so the space is intimate and not intimidatingly grand.

It also has a wonderful view – as above – of the Victorian Queen Eleanor Memorial Cross, a replica of the original Charing Cross itself, one of the twelve crossed erected in England by King Edward I between 1291 and 1294 in memory of his wife Eleanor of Castile. 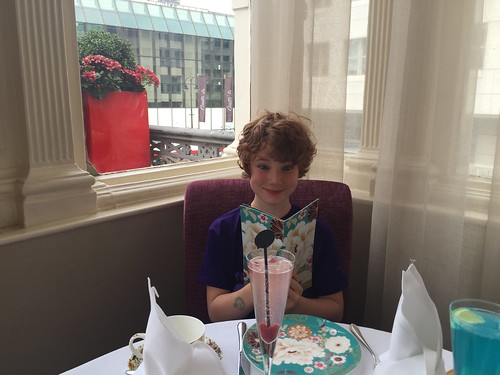 We loved every minute, from the kind, warm and charming service and pretty china, to the delectable cakes and sandwiches, which were really very good. My requests for more and more cucumber sandwiches were met with humour and speed, (sometimes I think cucumber sandwiches, when made correctly, are the best part of tea), and the scones were suitably warm and fluffy. 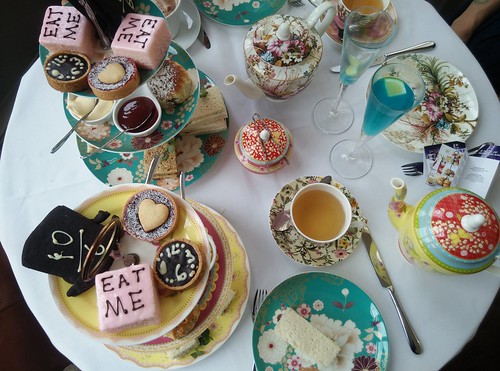 I must point out here that we were sampling the Alice in Wonderland-themed tea, which is sadly now finished, but afternoon tea is still very much a thing at the Amba, and I really cannot recommend it highly enough. 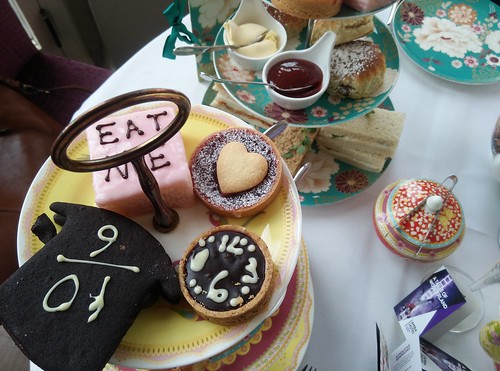 The Shirley Temple also went down a treat: 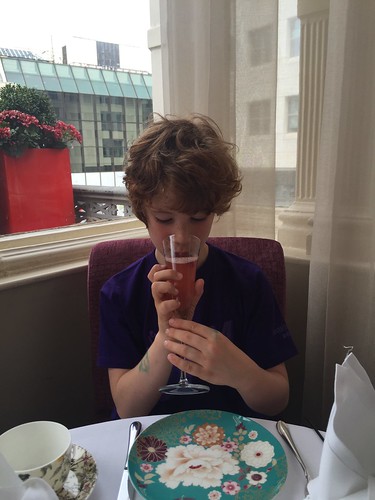 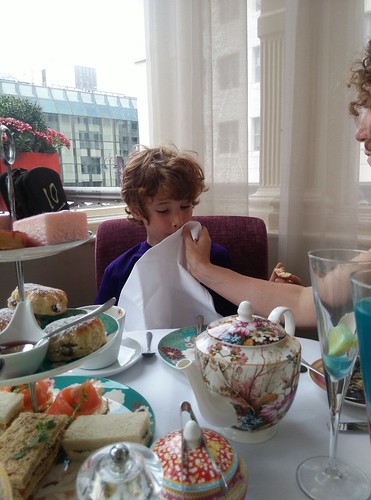 The hallways of the hotel are also worth a wander. 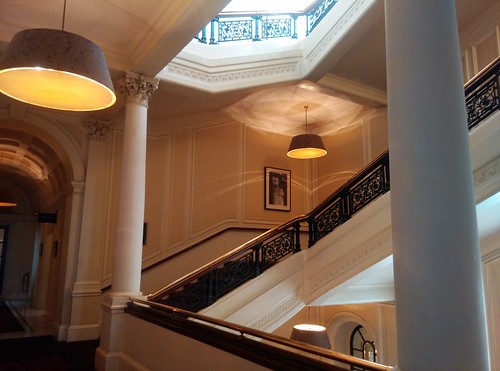 Before tea, we had spent a very exciting hour or so in the company of Alice, the Mad Hatter, Tweedledum and Tweedledee and the fearsome Red Queen (in drag!), at an interactive performance of Alice’s Adventures in Wonderland in the Waterloo Vaults, (it sold out almost immediately, but you can sign up to be emailed when the next batch of tickets goes on sale here) 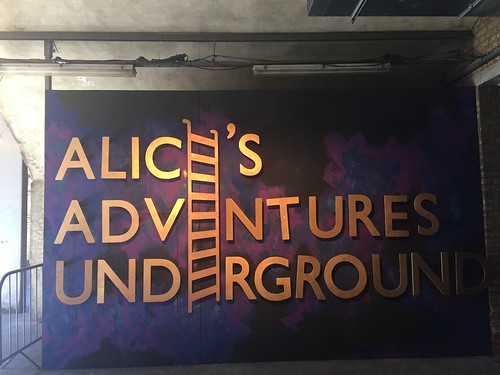 Obviously, one is not allowed to take photographs during the performance but here is a sampler from the official site: 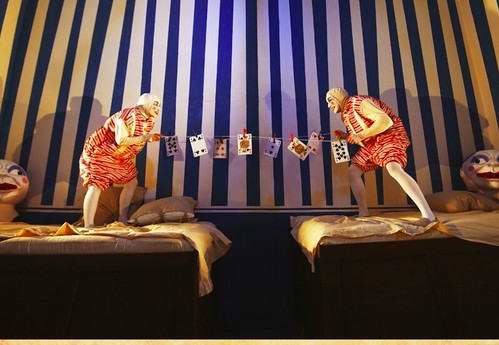 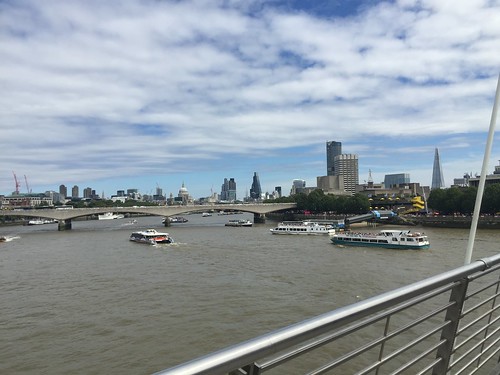 We walked to the hotel for tea after the performance  by taking the Hungerford Footbridge, designed by architects Lifschutz Davidson Sandilands, between the South Bank and the Embankment, with its glorious view over the Thames in each direction, and stopped to pose for the obligatory outing photographs. 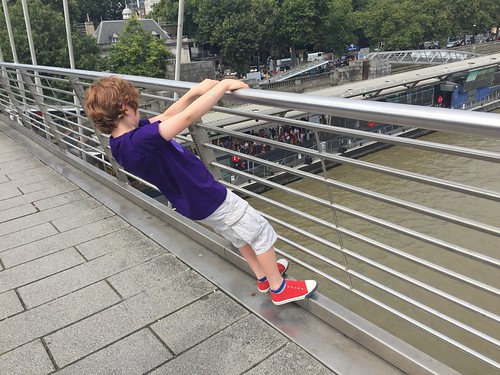 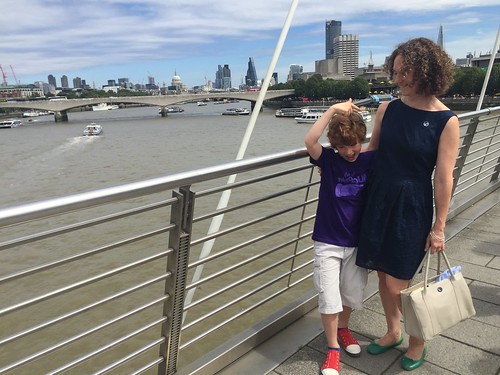 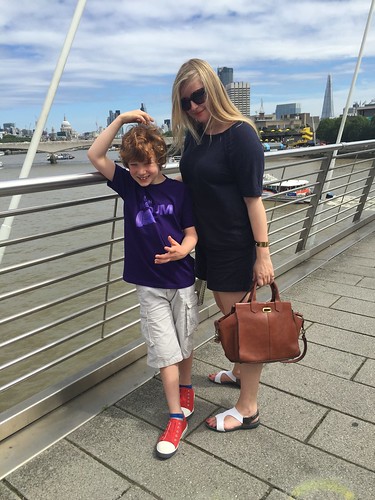 In case you were wondering, Edward’s new T shirt, purchased by me at the show, (because I remember how much I yearned for ALL the gift shops items when I was small, and a treat is not a treat without presents), says I’m with Tweedledum, which is why he is pointing at both his mother and me in the photos. 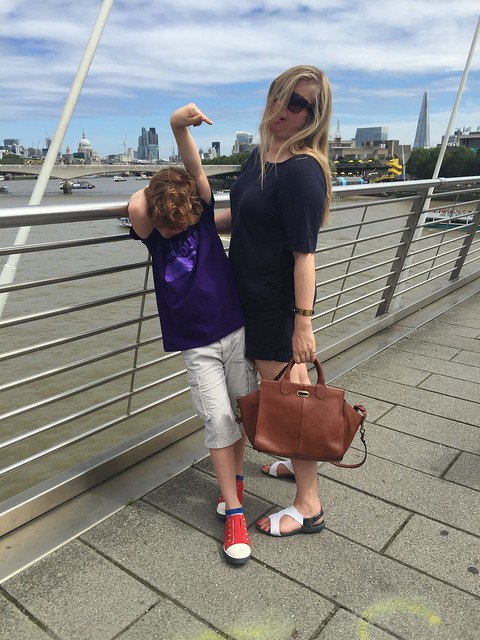 Huge thanks to the Amba Hotel for hosting all three of us for a magical summer afternoon and for feeding us such vast quantities of cake. There’s more information on their afternoon teas, and reservations on their website here.

The Amba Hotel is at The Strand, London, WC2N 5HX. (It’s a very short walk from Trafalgar Square, the National Gallery and National Portrait Gallery, across the road from the sublime Church of St Martin-in-the-Fields, and just minutes from Covent Garden and the river Thames.)

Apologies in advance for any break in blogging

Thanks for this review! I’m so impressed with your tea and with the hotel’s website and reviews that I’m going to book a room there for an upcoming vacation. We’ve always rented apartments in London, but I’ve been thinking that a hotel sounds like a lot more fun and why not this one? Sincerely, A West Coast Reader

Hi Sash,
What adorable pictures.
You and your grandson are so charming together.
Hope you are having fun in New York.
If you get 5 free minutes let me know:-)

The Amba is such a nice hotel, and this afternoon tea looks wonderful! Treating small folk is always such fun.

Such a lovely treat!

Great photos 🙂 I love this kind of family pictures 🙂

Oh, how right you are about cucumber sandwiches…
Looking forward to taking my gooddaughter out like this!