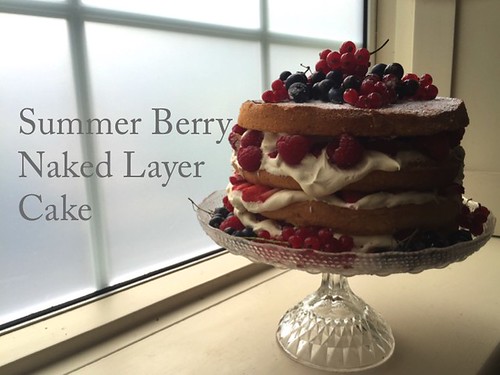 I’ve been amused for the trend for ‘naked cakes’, which has appeared all over Pinterest, Instagram and many, many blogs. A classic English sponge cake does not traditionally have frosted sides, so ‘naked’ isn’t a thing for us, just the way we’ve done it for years…(although that’s not to say that a lot of icing isn’t a Very Good Thing.) This is my recipe for a ‘naked’ light-as-air fatless sponge cake, which needs nothing but cream and berries to make it shine. 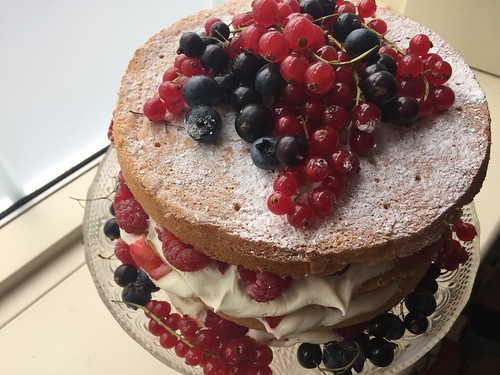 We celebrated my mother’s 70th a few weeks back, at her home deep in the English countryside in Northamptonshire. Fifteen of her dearest friends, plus dogs and daughters for lunch on Saturday around the long wooden table in the kitchen, with a menu of utter deliciousness.

My mother, the ace cook, made a seafood salad, then a glorious fillet of beef, from Mr Mumford the local butcher in Culworth, served with a simple salad of Little Gem lettuces dressed with an old English salad sauce (from a Diana Henry recipes), and tiny boiled new potatoes. Instead of a pudding, my mother asked if I would make a birthday cake that would do double duty.

This particular cake has always been a family favourite: I was taught the recipe by my mama, who is the master of light, fluffy and perfect cakes sandwiched with whipped cream and fresh berries. What could be more English, or more delicious?

Traditionally called a Whisked Sponge in the UK, but also known as a Fatless Sponge, using beaten eggs to give the cake height, and omitting any fat gives a super light and fluffy open crumb, which matches perfectly with a creamy filling. 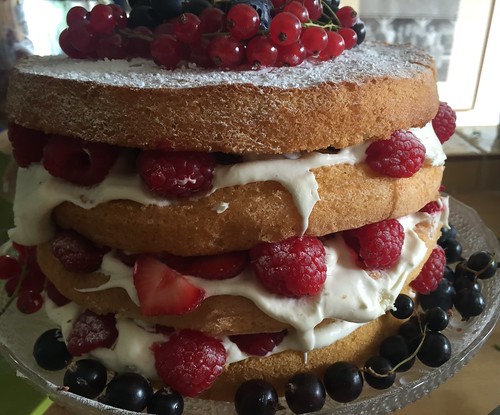 This recipe is also very quick and easy to make. The most important thing to remember is that you need to whip as much air as possible into the sugar and egg mixture before you gently fold in the flour with a metal spoon (always metal, not wooden), as this will prevent the cake from collapsing in the oven, producing horrid rubbery discs.

Of course you can pour this mixture into one deep Springform tin, and then use either a sharp knife, or this clever gadget to slice it in half. I prefer to bake two shallower cakes, as it is hard to prevent crumbs in the cream filling otherwise and, if you are leaving the cake to stand for a little while, it prevents any hint of sogginess in the sponge. 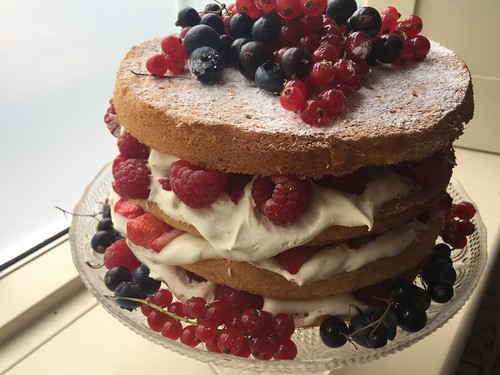 For my mother’s cake I wanted four layers, so I made the recipe twice. I prefer not to make it once with double quantities, as I find it hard to get enough air into the batter, and most ovens have a few hotspots, so the four cakes would not cook evenly for the same time. 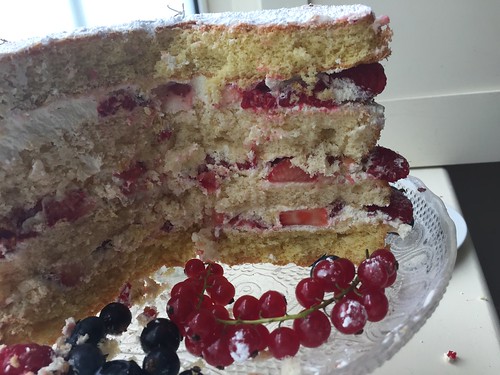 If you are going down the layer cake route, do not be tempted to just bake one quantity (two rounds of cake) and slice each cake in half to produce four very thin layers, as this would be very hard to cut because of the cream and fruit filling, which will squirt out the sides when pressed.

If you need to transport this cake elsewhere, do not fill the layers before doing so, as they will slide around. Also: you don’t want the cream to go off. Fill it just before serving.

You will need:
2 x classic 8″/20cm tins, preferably loose bottomed, Springform (like these)

A small amount of butter for greasing the cake tins, or Cake Release Spray.
A selection of berries to fill and decorate the cake.

I used two boxes of raspberries, and chopped a large punnet of chopped strawberries for the filling. I piled redcurrants, blackcurrants on the top, and studded more raspberries around the sides. Do this as soon as you have filled the cake, as the cream will set quickly.

Method:
Grease the 2 x 8″/20cm tins, either by a small amount of butter on a piece of kitchen paper and then tipping a spoonful of flour inside, and shake about, or by using Cake Release Spray.

Break the eggs into a large mixing bowl, and add the sugar. Whisk together until thick and pale. I use a stand mixer, so I can get on with other things, but hand beaters work just as well too.

When you can lift the beaters and leave a thin ribbon train sitting on top the mixture is ready. (This will take somewhere between five and ten minutes depending on the freshness of the eggs.)

Turn the oven onto 180C/350F/gas mark 4 Sift the flour into a bowl, and then carefully fold it in a few spoons at a time, using a metal spoon, being careful not to over mix, as you need as much air as possible in the batter to allow it to rise successfully. (I find that you really need to scoop the batter down to the bottom of the bowl to ensure there are no clumps of unmixed flour.)

Gently divide the mixture between the two cake tins, and bake for around 15 minutes until risen, and a skewer into the middle of the cake comes out clean.

Remove from the tin, and allow to cool.

Whip the cream until floppy (be careful not to over whip – I find that stopping just before you think it is done usually produces the perfect whipped cream). You will be filling three layers with cream and fruit. I do this by eye but, if it helps, divide the cream into three  onto one cake half, and top evenly with the chopped strawberries.

Sift icing sugar over the top layer, and then pile berries over the top of the cake, and around the sides to decorate. 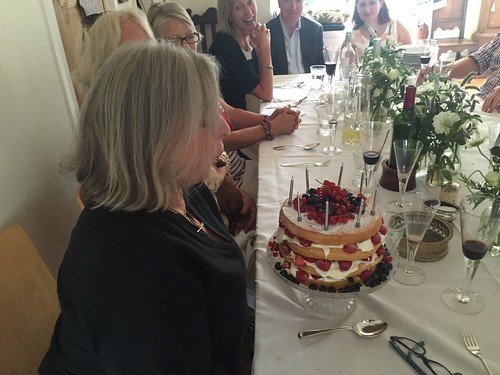 A Cautionary tale: Do not leave the unfilled four layers of your cake in the car en route to your mother’s house with two miniature sausage dogs for four minutes whilst you pop into the shops for a bag of pasta. This is what will happen: 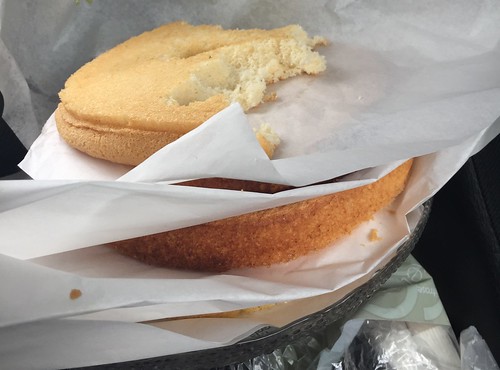 What I didn’t see at first was that Maisie had also neatly nibbled all around the hidden second layer. Whisker be-crumbed smugness all round: 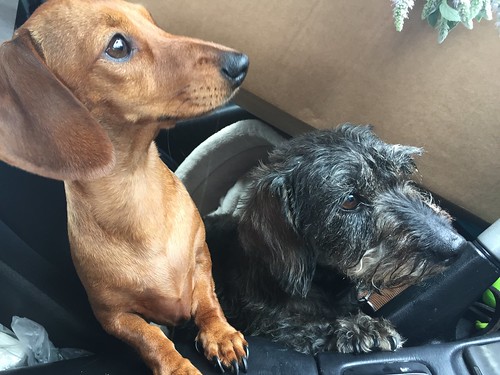 I blame Maisie (my sister’s dog). 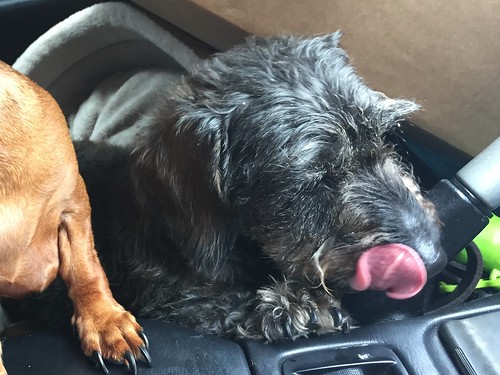 An Evening in London, from Taste of London 2013 to the WTA Party at Kensington Roof Gardens

Thanks for this recipe! Even if we’re nearing the end of “summer,” it still seems like a great recipe to have in one’s back pocket!

Would you mind explaining why you advise to never use a wooden spoon when mixing in the flour mixture? I’ve never come across this before (although I am a novice baker, at best) and wondered if there’s a reason behind it.

@Claire: It’s to avoid undoing the effects of the previous step, which was incorporating air by beating. If you use a heavier, thicker wooden spoon to fold in your flour, more air will be squashed out of the beaten mixture. Using a lighter, thinner spoon or spatula means you leave more of the air bubbles intact and your cake will be lighter and fluffier.

@tiggyt: Thank you! I realised almost immediately after posting that there were more appropriate places for me to ask this question (like Google!).

Who could blame them? The cake looks incredible!x

So beautiful! But how do you slice or serve it?

Oh, this looks so rich and delicious, and I bet it’s a really light cake – nothing that the store bought ones. You styled it perfectly, I wouldn’t do it differently.

Are you aware that eggs have a high fat content, so calling the cake fatless is very misleading?

You probably don’t know much about cooking? This cake is traditionally called fatless in English cookery because it is made with no butter or oils. (You can’t make a cake without eggs – unless it’s vegan, and this is not a vegan cake.)

My mother was taught to bake by her grandmother’s cook in the twenties! She was taught to sprinkle the top layer with granulated sugar before baking to give a meringue like crust. For the same reason to put a little sugar in the flour when preparing the tins to give crisp sides too.