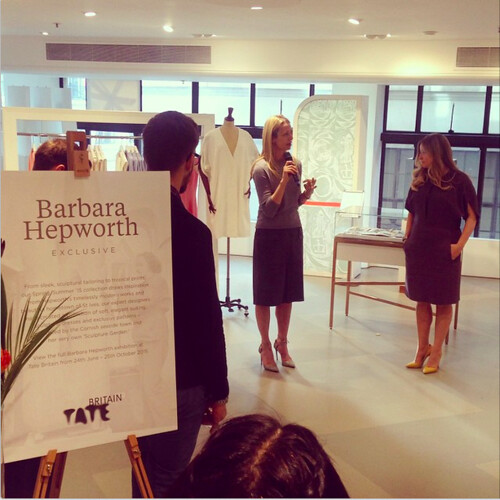 Last Thursday I hosted a store event for Jaeger at their Regent Street flagship, to celebrate their Barbara Hepworth inspired SS15 collection and, in particular, the capsule collection that draws directly on Hepworth’s work. (I‘m wearing the beautiful grey Petal-Sleeved Shift Dress, above with  Sheila McKain-Waid, Jaeger’s womenswear creative director, who I interviewed on the night.) 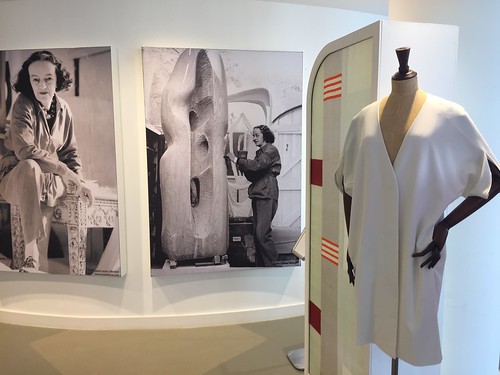 Many of you will have walked past John Lewis on Oxford Street, but I wonder how many of you will have realised that the ravishing sculpture that hangs on the side of the building is a Barbara Hepworth?Commissioned by Sir Bernard Miller – John Lewis’s chairman –  in 1961, it celebrated its fiftieth anniversary in 2013. 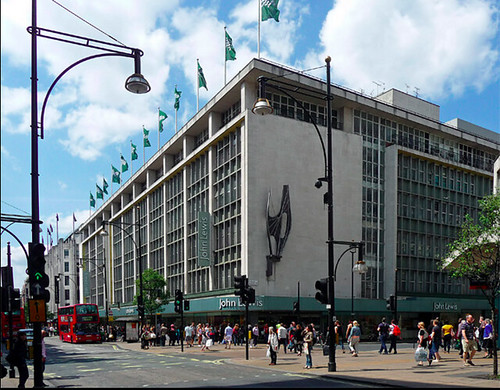 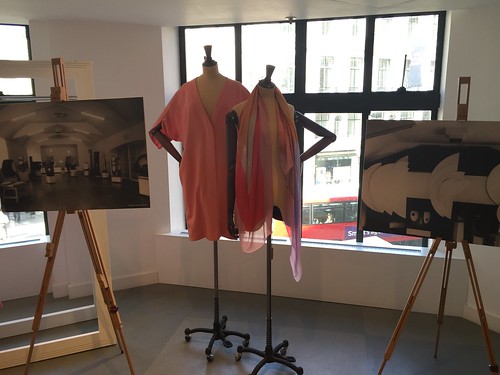 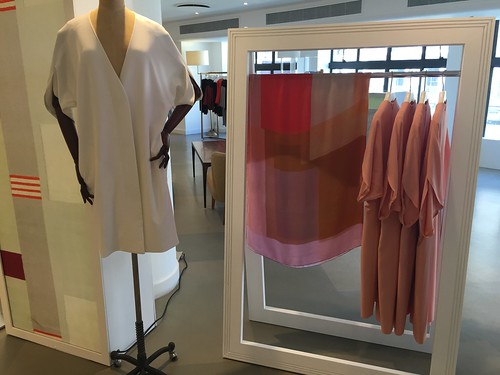 To celebrate, Jaeger have created a small exhibition space in association with Tate Britain on the second floor of the Regent Street flagship to highlight Hepworth’s work, including copies of correspondence from her personal archive and original photography of her works, supplied by Tate Britain. 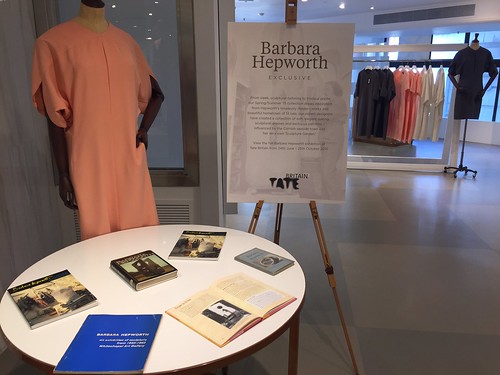 Daring and determined, Barbara Hepworth was one of the most successful sculptors of the 1950s and 1960s ‒ no mean feat as a woman at that time. Born in Wakefield in 1903 to a middle-class family, Hepworth went on to study sculpture at Leeds School of Art in 1920 and later (after winning a scholarship) to the Royal College of Art. Here she met her famous friend and contemporary Henry Moore, to whom she was often compared to and measured against. 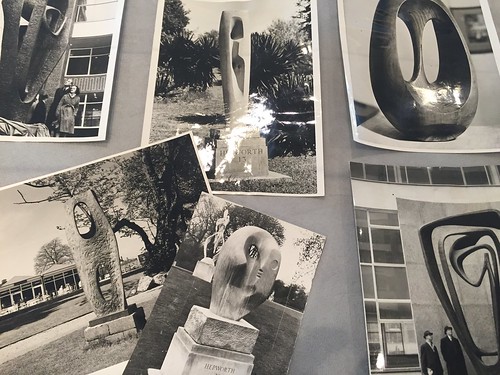 But it wasn’t until 1925 – when she married fellow artist John Skeaping and moved to Rome ‒ that she began creating her synonymous stone carvings; the inspiration behind the relaxed, unstructured shapes of Jaeger’s SS15 soft tailoring range. 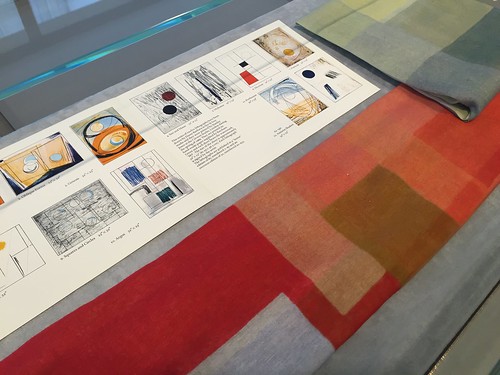 After a year in Italy, the couple moved to London and into a studio in Hampstead. However, after the birth of their son, Paul, and the deterioration of their marriage (during which time she had also met British painter Ben Nicholson), their marriage ended. 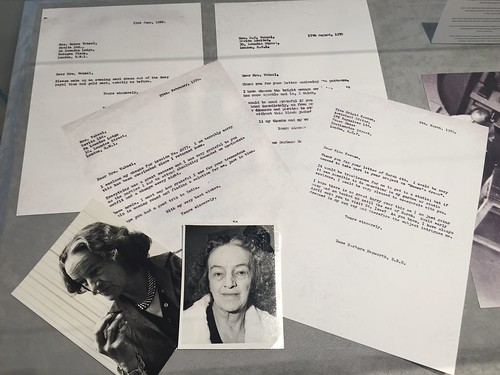 Five days before the Second World War Hepworth left London for St Ives with her new husband Nicholson and their triplets (her son Paul had been killed during a RAF mission in Malaya). Here, she began to carve wood as well as stone, adding taut strings, as though her sculptures were musical instruments. Waves, rocks and her lush ‘Sculpture Garden’, where she ‒ dressed in her signature oversized shirt, headscarf and statement necklace ‒ worked and lived until she died in 1975, became her inspiration ‒ and they became Jaeger’s too for this collection. 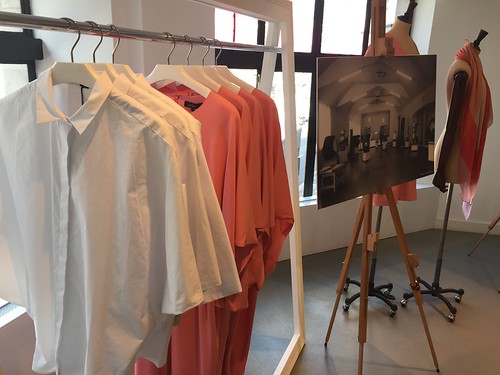 It was a wonderful evening – my friends at Blow Ltd were on hand to give free hair styling and make up touch-ups to all, and the Champagne was flowing.  It was lovely to meet so many interesting LLG readers – thank you to those who came up to say hello, and also to Hannah, Mark, Chloe, Ayla and Vanessa for swinging by! 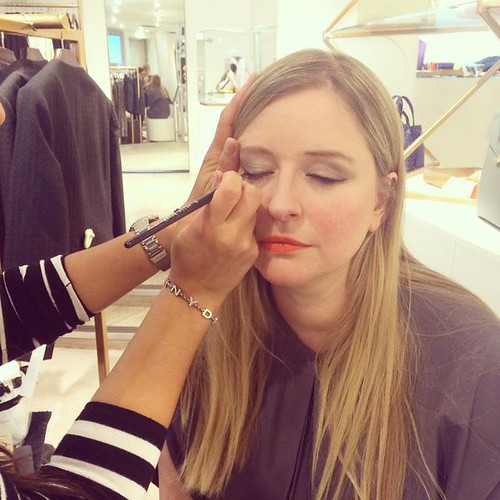 And there was a lot of shopping! Even I succumbed – a simple monochrome silk print dress, a cotton tunic (which I’ll wear over a bikini on the beach) and a perfect cream silk shirt all made a small dent in my bank balance. 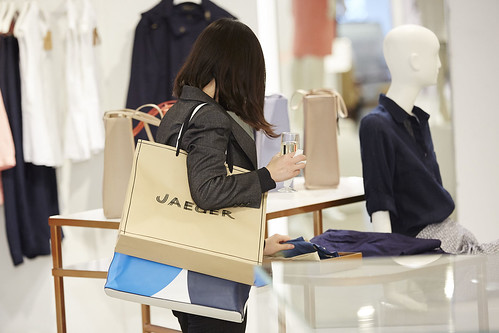 Barbara Hepworth: Sculpture for a Modern World: a reminder that you can book now to see the first major Barbara Hepworth exhibition in London for almost 50 years, at Tate Britain. This retrospective features some of her most significant sculptures in wood, stone and bronze alongside rarely seen works, and runs from 24 June 25 October 2015.

I should have realised that was a Barbara Hepworth sculpture on the side of John Lewis, they are so distinctive. Would have definitely come along if I had been free, Jaeger have modernised their collections really well in the last few years.

The Jaeger flagship store is so beautiful, as are the grey dress you’re wearing and the silk dress you bought. I have enduring love for Jaeger – if you choose right, the designs can be made more contemporary with the right shoes and jewellery, and the work clothes are amazing quality. Well worth the cost – the definition of good value (as opposed to cheap…)

A fascinating article blending the worlds of architecture and fashion. I will definitely check out the sculpture next time I’m passing.