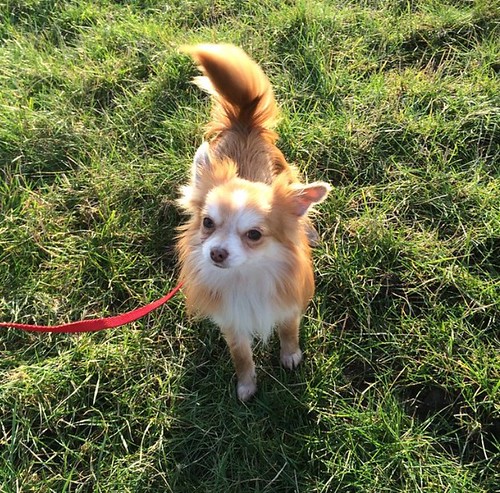 You may remember my post from last autumn when Lettice was microchipped at a Dogs Trust event in Kentish Town. The lady in the photos looking after her was Dogs Trust Campaigns Manager Jacky and I am appalled to discover that someone has stolen her beloved seven month old long-haired Chihuahua Frankie from the front of a Dogs Trust van whilst the charity’s team were finishing a similar community event near Bradstock House, on the Gascoyne Estate in Hackney.

During the day the team had microchipped dogs, given out free neutering vouchers and provided hands on training, behaviour and veterinary advice. However, the day ended with the shocking realisation that Frankie had been stolen.

Frankie had spent the majority of the time out with the charity’s team demonstrating his prowess at agility, but as the temperature dropped he was moved into the locked van. Between 2.30-2.55pm Frankie was taken from the van via the driver’s side window. Both windows in the van were slightly open to allow for fresh air to circulate for Frankie and when the incident was discovered the driver’s side window had been pushed fully down.

“I’m in shock that this has happened to me. To think that whilst we were helping dogs in the local community someone has stolen my precious dog Frankie is devastating. If anyone sees anything or knows anything about what happened yesterday please can they call 101 and cite CAD ref 5425/10mar.”

Dogs Trust is urging anyone with any information to come forward and help them reunite Frankie with his family. He is microchipped, neutered, has identification tags and comes when called.

I hope she finds the dog soon, this is terrible.

Oh what a horrid thing. Hoping she is found safe and sound soon x

I’ve been circulating this on Facebook. I pray Frankie and Jacky are reunited very soon x

Keeping my fingers crossed that you get your Frankie back very soon. Such a shocking thing to happen to anyone.