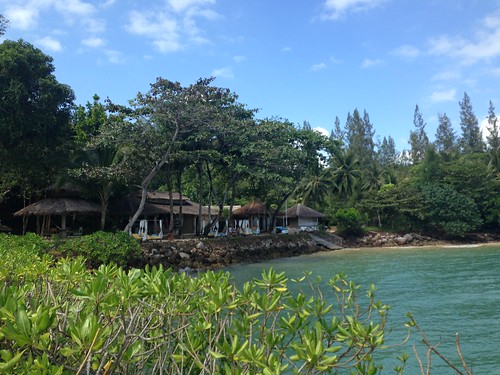 (Our final view of the Six Senses Koh Yao Noi from their speedboat.)

I am skipping a week or so in our travels, as we have now said goodbye to tropical paradise and arrived last night in Hong Kong after a straight eleven hours of travelling: it took a buggy, speedboat, minivan, plane, and taxi to get us from the Six Senses Yao Noi on Koh Yao Noi, forty-five minutes north west of Phuket to HK. 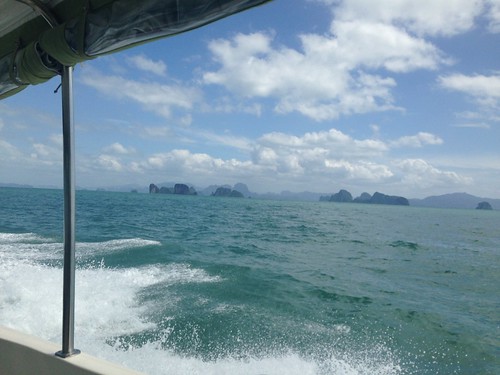 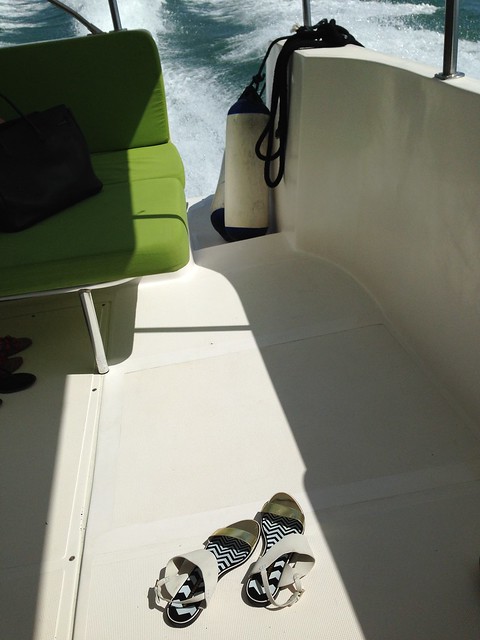 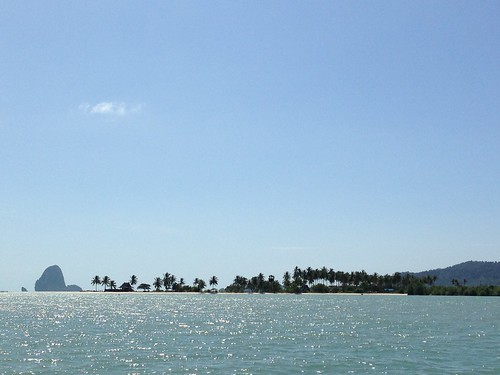 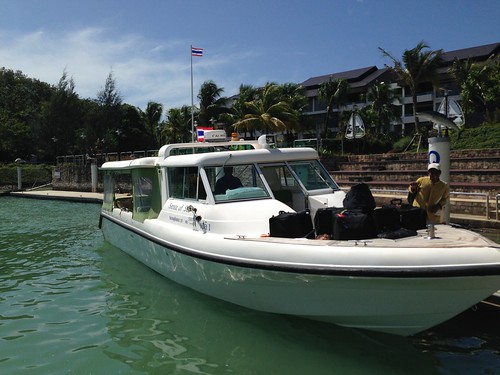 The Six Senses private speedboat, loaded with everyone’s bags, as we disembarked at the marina on Phuket. 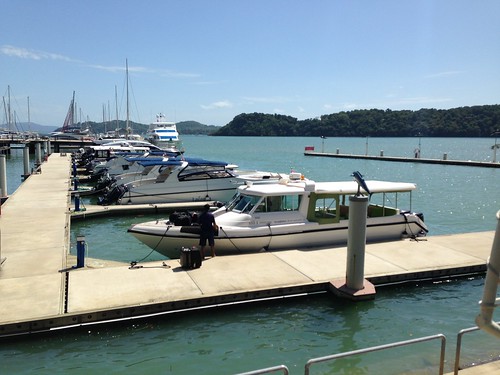 After half an hour driving from the marina, we spent an hour or so scrabbling around on the floor of Phuket airport, once we had retrieved our large cases from Left Luggage, re-packing and organising. My case weighed 30kg. Oops. Good thing that, for the princely sum of £7, I had bought extra baggage allowance on our Air Asia flight. We also managed to buy a new bag each in the Jim Thompson airport concession.

That being said until that point, we had bought precisely nothing on this trip so far. Nothing at all. No souvenirs from market stalls, no over-priced resort boutique beach clothes, nothing bar a bag of fruit and a Thai SIM card and credit each. 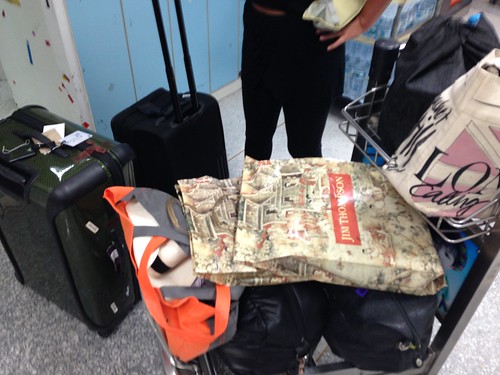 We then nearly managed to bolox up everything by both mislaying our immigration exit forms and not realising. But in glorious serendipity both managed to pull them out of piles of paper in our carry ons, like rabbits from hats, just as we got to the front of the queue.

And then, just as we were congratulating ourselves on not having to go back through security for new ones, 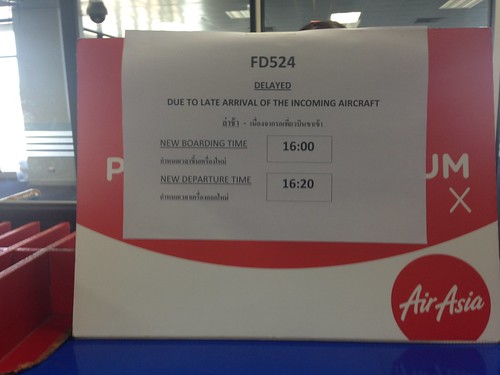 Although there are many, many ways to spend your money in Phuket airport, unfortunately, unless you particularly like pastries, Dairy Queen, cashew nuts or pot noodles, there is bugger all to eat. My hunger was only vaguely relieved by the discovery that there were fresh green coconuts in the snack shop chiller. 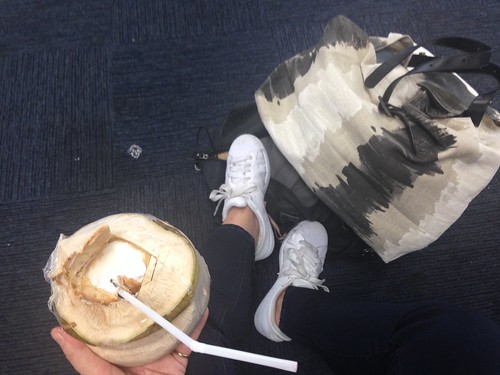 The flight was three hours, and enhanced by the extraordinary phlegm hacking of the Chinese man behind me for much of it. We were so knackered by the time we had cleared immigrations and customs at Hong Kong (and that was with our bags first off the carousel, and no queuing anywhere whatsoever – that airport is the very definition of oiled wheels), that we nixed our plans to use the MTR, piled everything into a cab, and zoomed our way onto Hong Kong Island. 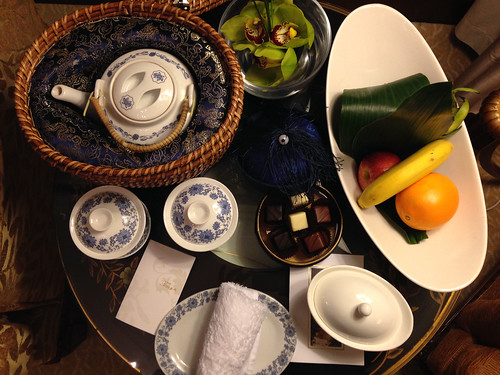 and oh the happiness of a speedy check-in at the Island Shangri-La hotel, and the discovery of a table in our room piled with delicious things that soothe: a welcome note, box of chocolates, fruit and, most exciting of all, a pot of excellent tea, cosseted in its own padded basket. 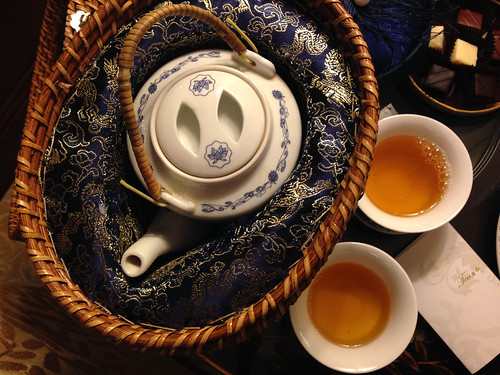 We were supposed to be eating at Felix, the Philippe Starck restaurant at the top of the Peninsula, but we had to cancel our reservation from Phuket due to the delay.

Instead we stayed in our room at the Island Shangri-La, watched the end of Now, Voyager on the telly, and ordered room service. (And a quick mention for what has to be, hands down, the best in-room dining menu I have seen in any city hotel in my entire career (fifteen years+) of hotel reviewing. There was even an entire vegetarian section, something never before seen.)

We both chose a portobello mushroom burger and fries – at 10pm vegetables seemed the way forward. We have eaten only Thai food, bar a mezze plate at the Six Senses since we left England, and I must admit that I was ready for a change. 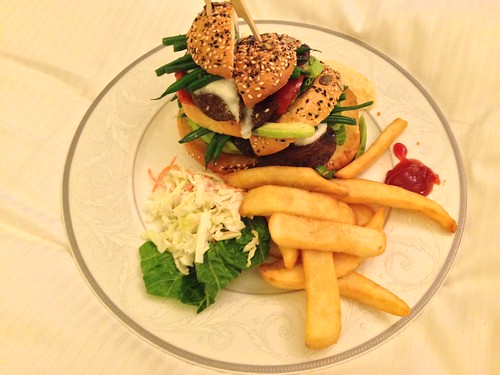 Goodness there really is a lot to be said for a delicious duvet picnic on the restorative front, after a long day of travelling.

We are being hosted for two nights, and paying for our own meals, at the Island Shangri-La in Hong Kong.

Travel: The Mappin Festive Express on the Belmond Pullman

I love the airport train it takes seriously about 12 minutes from the airport to the island- much faster than a cab. And wait til you leave- you check in your baggage in Central and then go to the airport on the train luggage free. Bliss. It is the best airport in the entire world. Hope you are going to Zuma and Sevva while you are there. I love Hong Kong. Everything about it is pretty much wonderful.

Thanks for this post. You stirred some great memories of mine, most particularly the Peninsula Hotel and the phlegmy Chinese gentleman. HK is great stuff.

Ha ha ha! ” Extraordinary phlegm hacking..” I will have to remember your most excellent line next time I am seated next to his friend!

Love Thailand and your posts!