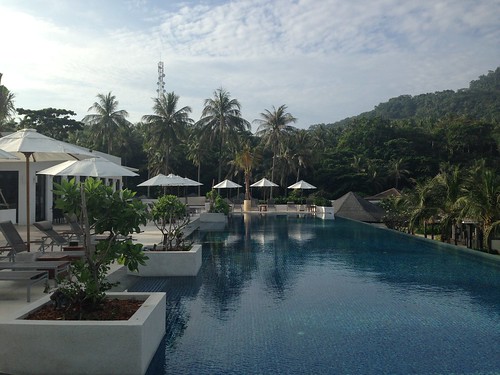 oh what a blissful three days we had at The Racha, a resort hotel on a tiny island twelve nautical miles off the southernmost point of Phuket. We arrived after nearly thirty hours of travel from London on Christmas Eve, hot, a little bit sweaty, and very, very happy to be in one place. 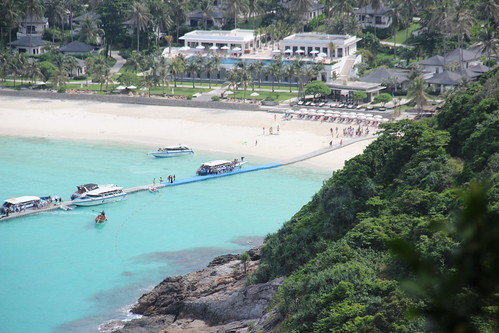 The Racha is a series of villas, surrounding a large central building and green lawns, as seen here from the peak overlooking the bay. (We hiked up there one morning.) 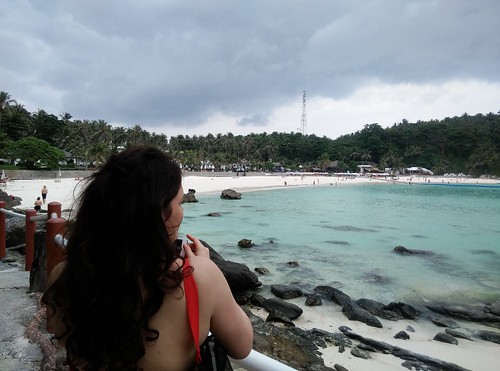 The hotel is right smack bang on the beach, which is everything a tropical beach should be. A small bay, lined on each side by forest, with crystal clear green-y blue waters, and soft white sand. 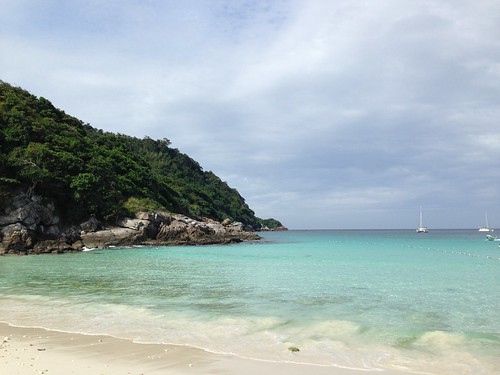 The island is uninhabited, and has just four places for tourists to stay, Bungalow Raya, a backpacker place high up on the edge of the bay with a small but good basic restaurant, a new small Thai style resort called Rayaburi, Ban Raya, a mid-level resort on the other side of the island from The Racha, the luxury boutique resort which rather dominates everything, where we stayed.

Hotel guests gather in The Racha’s air con reception lounge at Chalong on Phuket to check in, before taking one of three regular daily speedboat transfers (2000baht return, about £40, or free for five day or more stays). It takes a knuckle biting 45 minutes from Chalong pier to the island. (Other visitors can take motor (also 45mins), or long tail boats (around 2hours) which are substantially cheaper.) 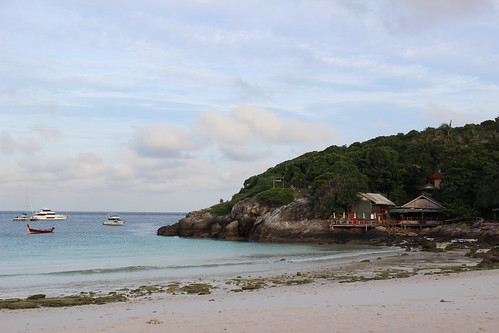 The beach at low tide, first thing in the morning, with the backpacker place on the right of the bay. (Above.) 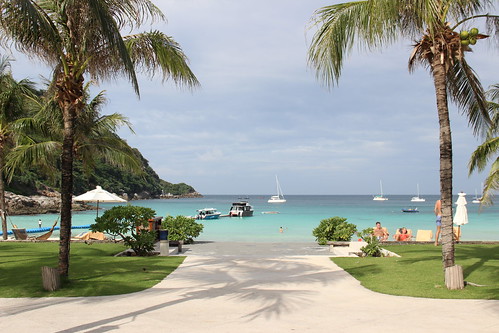 The view from the main hotel buildings over the beach. (Above). 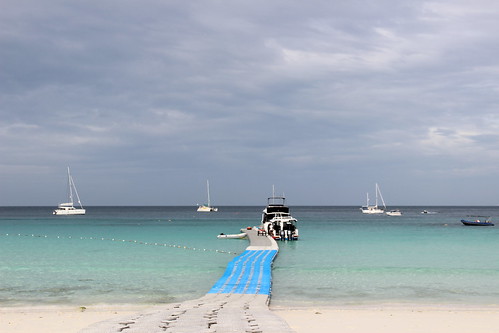 The beach is reached by a floating pontoon. Whilst I fully appreciate its eco-friendly credentials (no concrete stanchions driven into the seabed), I did not enjoy walking down this from the speedboat. It moves with the waves, wobbling like a weeble and, as I have the balance skills of a toddler, I found it extremely tricky to keep upright. Thank goodness the lovely bellhops carried our cases and bags, otherwise it would have been a guaranteed early bath for me.*

The hotel’s main buildings are Mediterranean in feel, with whitewashed walls. 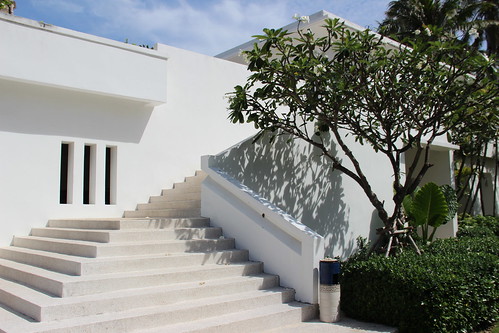 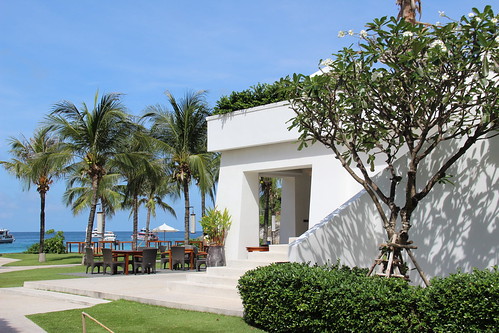 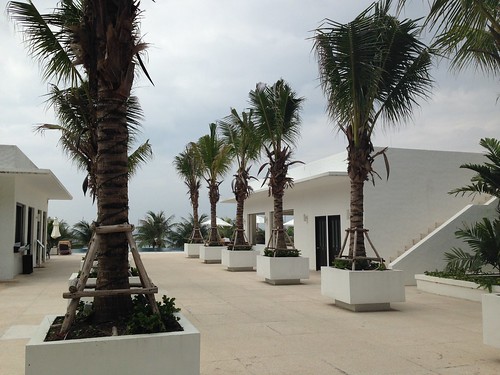 The hotel has a three night stay minimum at peak season. We were staying in a Deluxe Villa for two nights, (around £250 per night) with an upgrade to a Pool Villa (£500) for the third night, as the first Villa was booked out for our last night. 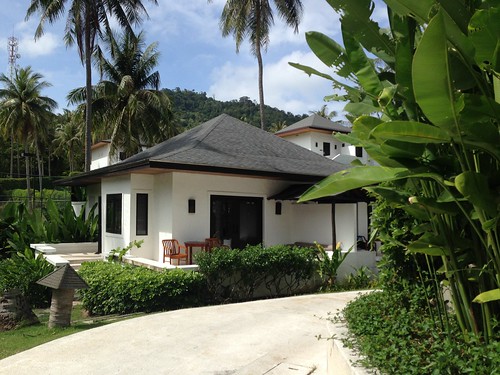 I absolutely loved the outdoor rainhead shower in our Deluxe Villa (above). 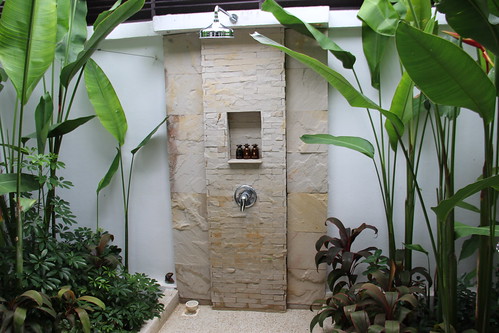 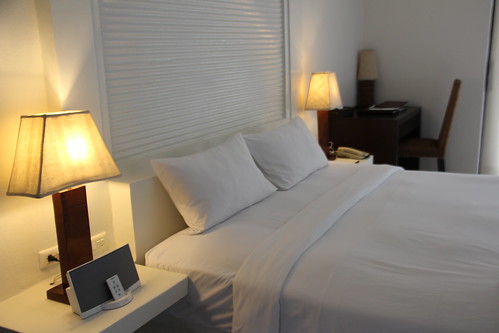 Many of the villas have their own plunge or infinity pools, but there are three really excellent pools. The showpiece infinity pool (photo at top) overlooking the sea is absolutely glorious, long and wide and perfect for swimming lengths. 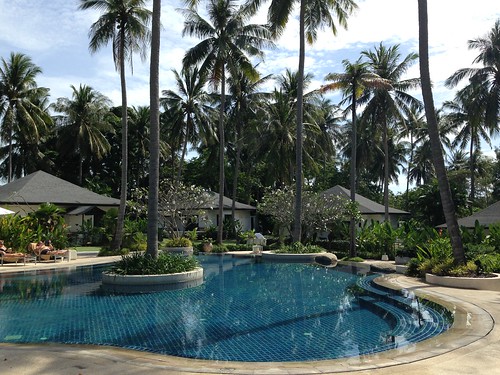 Then, set much further back in the resort, there is the Garden Pool (above), around which are arrayed the less expensive Deluxe Villa accommodations, where we stayed for two nights. It’s a clever idea, as it means these villas (which are split into two spacious lodgings each), and much further to walk from the restaurants, beach and reception, don’t feel out on a limb. 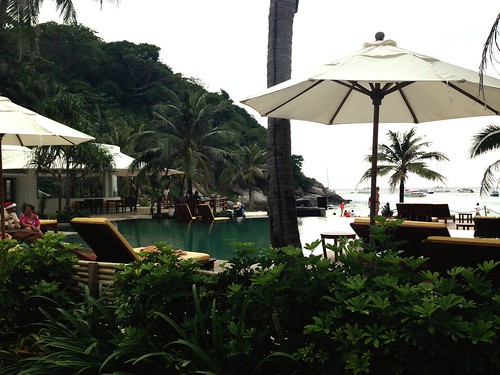 The final pool is in the Ibiza-style Beach Club, built recently to mainly accommodate the day trippers from Phuket island, who can pay 500Baht to use it. It’s free to residents, and provides a lovely quiet haven if you like being in a pool right next to the beach.

There is also a beachside cafe run by the hotel (below), which thankfully serves Thai food at lunch, along with a seafood BBQ in the evenings. (The hotel’s main showcase restaurant serves a very unexciting and phenomenally expensive ‘international’ menu.) 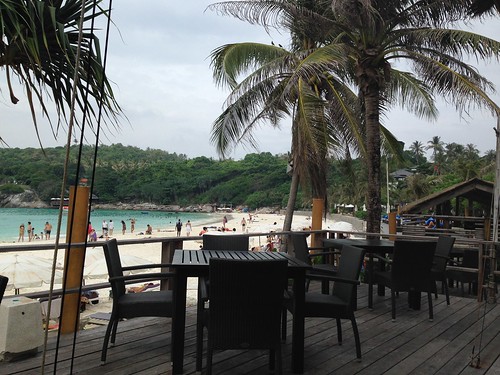 There are sun loungers on the beach for hotel residents, and lovely hammocks and loungers set out under the palm trees fringing the beach along the lawns beside the beach. 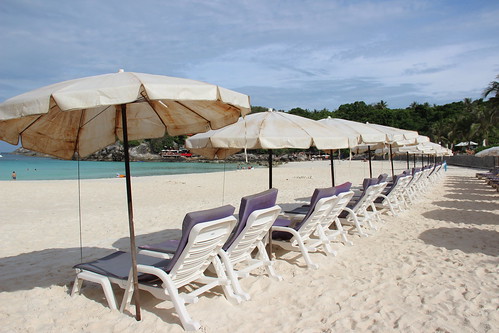 In recent times there has a been a huge problem for the hotel with day tourists from Phuket crowding the beach (all beaches are public by law in Thailand), with angry reviews from guests flooding Trip Advisor, as the hotel really is literally on the beach, and apparently the noise pollution was excessive.

However, a recent crackdown by the Thai authorities on beach furniture means that all the umbrellas and loungers for hire by the public have been removed, along with a series of huts and shacks housing shops and bars on the east end of the beach, and consequently the whole beachfront is now very calm with only a few visitors spread out along its length each day between 10am and 4pm when the last day boats leave. 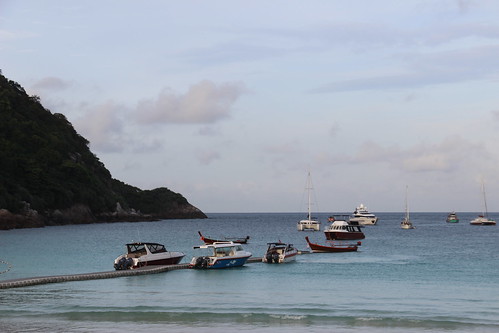 It’s actually a plus for hotel guests, as there are a few little shops open to service the day trippers, selling ice creams, coconuts, sun hats etc at a fraction of the quite high hotel prices.

We loved our stay at The Racha, which is kind of like a boutique style Club Med, without the relentless cheeriness, but with the free bikes and kayaks. We indulged in several really excellent treatments at the Spa, and lots of lovely lounging time.

There were just two issues: we were really disappointed by the hotel food, of which more later. It was expensive – not far off everyday London prices, (captive market) for a not particularly good offering, (pad Thai is better and cheaper in Camden), and the breakfasts weren’t up to scratch by a long way. It’s also very, very, very limited for vegetarians, although the staff are very accommodating if you make an effort to request something to eat.

The second is that many of the charming and polite forward-facing Thai staff speak limited or no English – fair enough, we were in Thailand, after all. But the hotel runs everything in English, and it is the primary language used on the resort to communicate to guests. So it does mean that quite a lot gets lost in translation, and it can be quite stressful on both sides to communicate successfully, and we were never quite sure if we had understood each other. 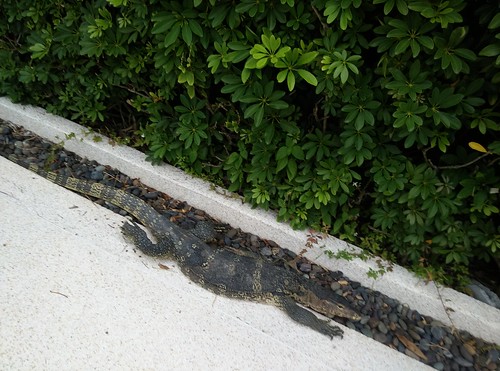 There has to be a mention in dispatches for the many cats prowling the resort (do not stay here if you dislike the furry beasties), and the HUGE monitor lizards, which happily roam the island, gobbling up snakes. (Which makes them welcome, if disconcerting residents.)  I nearly stepped on the one above, which almost gave me a heart attack, lolling about on the pathways in the Spa, and the one below which was casually crossing the road up by the backpacker hostel. 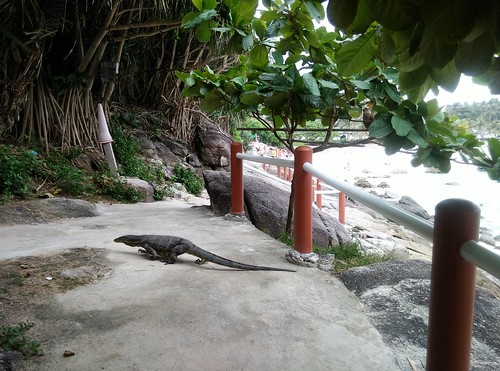 Rachel and I paid (full price) for three nights bed and breakfast at The Racha, two nights in a Deluxe Villa, and one night in a Deluxe Pool Villa, with its own plunge pool, overlooking the beach. We booked our stay through Mr & Mrs Smith, and found the experience exemplary. (We received a complimentary bottle of good red wine and a fruit bowl as Mr & Mrs Smith customers at the hotel, which was a nice touch.)

*(Regarding accessibility: There is no way that, for example, my sister, with her MS-related balance issues, or my mother with her crook knee could have managed even a step on the long floating pontoon, although I am sure they could have been carried or wheeled. Honestly, if you have any kind of mobility issues then I don’t think Racha would be the hotel for you. Getting on and off the speedboat at the jetty at Chalong requires gazelle leaping for the able-bodied, there are steps everywhere at the resort, the villas are far-flung, mainly with stepped or steep access, and the beautiful infinity pool is reached by many, many stairs.)

A Day in the Life: Oscar-Winning Costume Designer Colleen Atwood

It looks and sounds pretty heavenly, despite the lizards, poor food choices and gazell-like jumping 🙂

It is snowing and freezing cold in Zurich, it’s been snowing almost non-stop for three days, so even the sight of anyplace warm is a welcome respite!

It was! HEAVEN! The most beautiful beach and swimming pools. we had a glorious time. So long as I don’t step on one, I’m down with the mosquito and snake eating lizards, and even medicocre Thai food is still YUM THAI FOOD GET IN MY TUMMY NOW!

Looks perfect, though I’m disappointed to hear that they couldn’t be more accommodating for your mother and sister.

Will you ever start your video reviews again? I used to really enjoy the hotel editions!

Hey Daria – i think you may have mis read that one – I’m actually on holiday with my best friend Rachel. I was just commenting that IF they were here, they might have issues.

Hi Sasha, as a fellow lover of Thai Food – and a Camden resident – I was wondering if you have tried The Blue Moon Cafe right near Tufnell Pk tube? It’s just a short walk from Kentish Town. Some of the BEST Thai food ever, and its cheap.
Best Drunken Noodles ever.