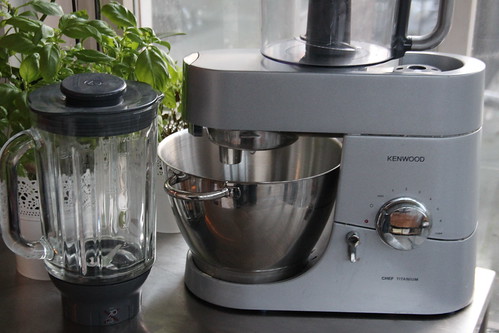 I was given the Kenwood Chef Mixer as a review model about eighteen months ago by Kenwood, who knew I was a fervent fan of their machines after this post, and this is the mixer that I used in the development of the recipes in my cookbook Friends, Food, Family. It still looks as good as new after over a year of almost daily battering.

It has a lovely deep 4.6 L bowl with splashguard and its 1400-watt power motor means it is never defeated. I’ve now wholly moved from mixing cakes in my Magimix to using the Kenwood and its K beater, because it can cope with large quantities. That’s why I also think its sensational for batch preparing brownie batter, (sure I can beat it with a wooden spoon, but when I am making four pans at a time this is the way forward), and it whisks together my Swiss meringue butter icing like a dream.

Of course it isn’t just a mixer, it does hopping, grating, slicing, whisking, kneading, mincing, mixing, grinding, milling, blending and squeezing depending on which optional attachments you invest in. I have two: a sturdy glass blender, the Thermo Resist Blender Attachment, and a food processor, both of which top-mount. The blender is a proper workhorse – the motor on cheap blenders can easily burn out if you use it regularly for ice cubes (cocktails and smoothies), the glass is heat pro0f for soup-making, and it’s 1.5l capacity means there is lots of space to whizz liquids.

The food processor is quite small,  (a working capacity of 1.25l), but ample for a standard 7″ sponge, for chopping onions, or for using the grating discs for small amounts of cheese. I have a huge pro Magimix and it would never replace that but it’s a very, very handy extra for when I don’t want to haul out the Magimix as well as the Kenwood. And when you are batch cooking or catering it’s a boon to have two food processors to hand.

I also have my eye on the metal fruit press attachment – for some odd reason Kenwood don’t publicise this, but it is in actuality a cold press juicer and is a very economical alternative to the £150+ stand alone juicers on the market – like my Matstone.

As much as I love my Matstone, if I had realised that this attachment (which doesn’t show up anywhere on Google searches because, let’s face it, no one searches for ‘fruit press’)  existed, I wouldn’t have needed to take up all that extra space in my kitchen. 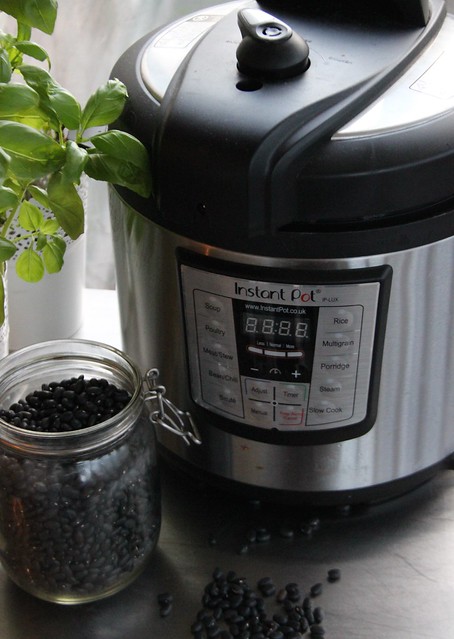 The Instant Pot 6-in-1 Programmable Pressure Cooker
Love LOVE pressure cookers. I just cannot seem to get my pulses really soft when I prepare and cook them traditionally from dried. Chick peas in particular need hours and hours of soaking, and cooking, and even adding bicarb and other tricks doesn’t lessen the long time needed or make them melting enough for my tastes. Tinned chickpeas are adequate – I couldn’t cook without them, but I wish there was an alternative.

Holly gave me an old fashioned pressure cooker some ten years ago which meant I could finally have proper chick peas from scratch in under an hour, but I cannot pretend that I am not frequently terrified as it wheezes and steams away on the hob.

The new Instant Pot has taken America by storm, rushing to the top of the market in its sector, and it has now launched over here. It’s USP is that it is a self-contained, fully automatic, stand alone 6 litre electric cooker. That means it’s not just a pressure cooker: it can saute/brown, and slow cook. It’s also a rice cooker, steamer and warmer.

It took me a few weeks to (wo) man up to unpacking this review model: I feared it would be a case of an hour or so reading the instruction book and scratching my head, and I was just too busy to spare the time.

In reality it took longer to cut through the packaging than it did to master the pressure cooking side of it. Within forty five minutes of taking a box cutter to the cardboard I had produced perfectly cooked chickpeas from small hard pellets. And I really do mean perfect – soft, melting, the best I have ever eaten.

The large, easy to use control panel has ten built-in Smart Programs, and automatic keep-warm procedure, and 3 temperatures for saute/browning and slow cooking. (Vitally, for slow cooking it has a delay cooking time up to 24 hours.)

But it’s the pressure cooking side of it that has totally won me over: it’s highly energy efficient – no endlessly bubbling saucepans, and safe too – it has 10 proven safety mechanisms for people scared that the pressure will explode.

If you are a gadget monkey then this could be your answer – no more need for  separate slow cooker, rice cooker, or pressure cooker – one Instant Pot instead. 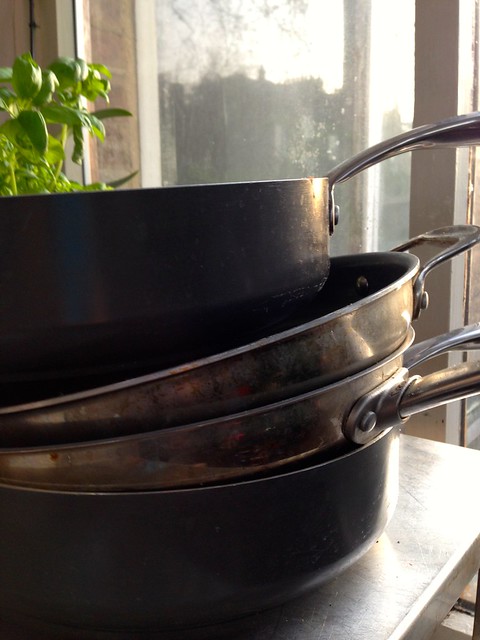 My Green Pans. I use these pretty much every day – again, these were what I used to cook for Friends, Food, Family. They heat up quickly, conduct heat beautifully, and wear well. I have a huge collection now – I’ve bought some, been given a few by the PR, and have a lot of the excellent heavy duty bakeware too, which I was given by the manufacturer when I was recipe testing FFF.

I particularly like the big, wide sauteuses – and you’ll see them throughout my book, as I photographed a lot of the recipes in the pans I cooked them in. (There’s good picin the book of the sauteuse in the yummy recipe for Jerusalem Artichokes with Peas, Lemon and Garlic Butter .)

Michel Roux uses them at Le Gavroche – the double handed frying pan is part of his premium range for Green Pan, and (secret fact), they are the pans and bakeware used exclusively on Great British Bake Off – of course because it is the BBC that fact can’t be announced, but they are easy to spot.

But it’s not just their excellence as pans that is important. All Green Pans features a non- stick ceramic coating called Thermalon that is safer than traditional non-stick coatings. Thermalon is a natural mineral material made from silica (sand) that is scratch resistant, as well as heat resistant to 450 degrees C.

Thermalon is PFOA (perfluroctanacid) and PTFE (poltetrafluroetheylene) free. PFOA is a manufacturing agent, and if overheated (above 260 degrees C) will emit toxic fumes into the environment.  PTFE is found in all traditional non-stick coatings and can break down, blister or chip if overheated.

Additionally, Thermalon provides fantastic non- stick properties so there is less need for oil or butter when cooking, if you wish to cut down on fats. (I’ve made omelettes with a dab of butter successfully in my small Green Pan.) 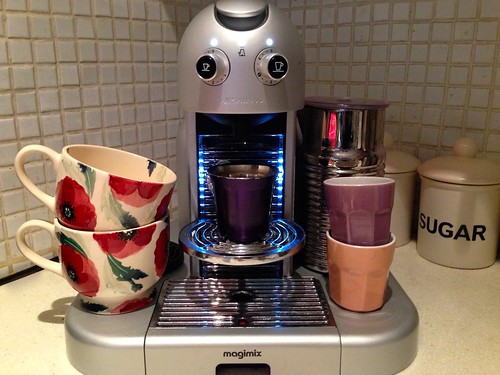 ahhhh my spaceship. Sitting in the corner of my kitchen, this Magimix Nespresso Coffee Machine (review model) got me through the writing, testing, styling and photographing of my book. I love the espresso shots it produces, with a perfect crema.

The Americanos are good and strong, and I have finally got the hang of frothing the milk automatically in the integrated and improved Aeroccino machine for cappuccinos. There’s a cup warmer, a variable volume control with 5 different settings (Espresso 25-60ml, Lungo 70-150ml), and a supportive stand for large cups (the smaller models only support very small cups unless you hold them.)

This is the creme de la creme of machines, but the entry level Nespressos are excellent, and can be found for around £99.

Mugs by Emma Bridgewater. Metal Pixie Lungo espresso cups by Nespresso (I LOVE these – they keep the espresso shots properly hot), and china espresso cups – (Philippa gave me these. I like these ones too.). Vintage sugar pot.