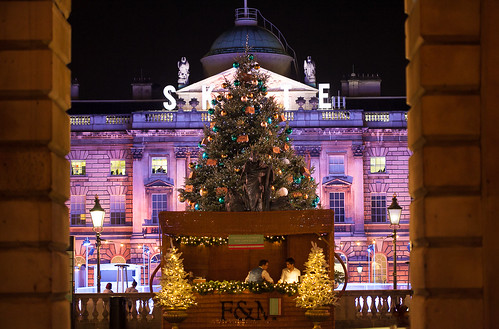 I know that every year we all think that the Christmas build up starts even earlier, but I’ve also started to realise that unless I start thinking about all things festive from now, December puts on its rollerskates, and suddenly it’s the 24th and there has been no drinking of mulled wine, no skating, no party frockage… 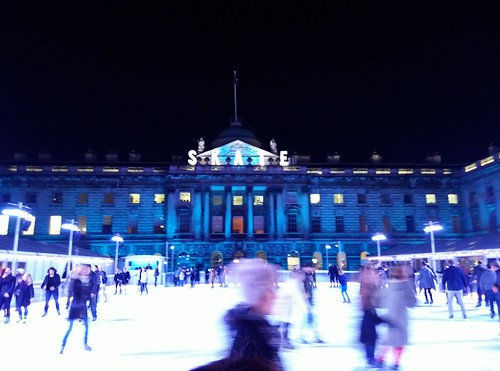 Last week I got my festive campaign off to a flying start with the properly lovely opening party thrown by Fortnum & Mason to celebrate their sponsorship of this year’s Somerset House ice skating rink, the loveliest in London. 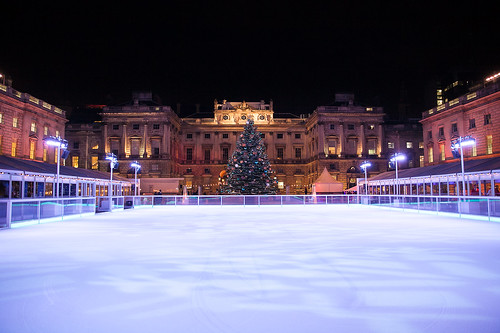 I had spent all of the afternoon in glamorous Chessington,  (some twenty miles south west of  central London) getting the lichen encrusted, leaking roof on my convertible replaced (soggy bottoms should only ever be in reference to pastry), and stopped off at Hannah’s for restorative tea and biscuits on the way home. It was then that I realised it would be pointless to drive all the way back to Camden from Putney, and then back to town for the party. 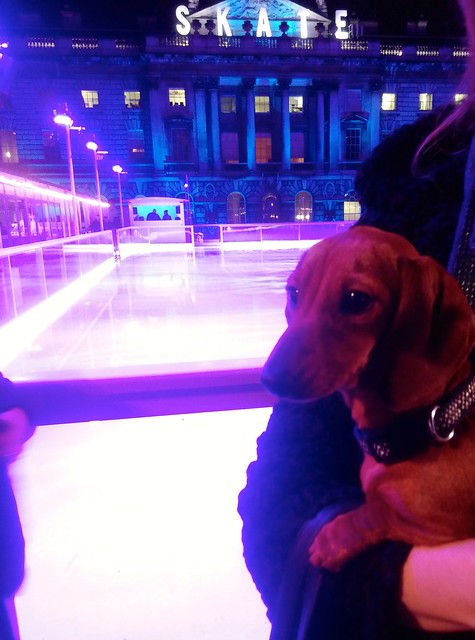 So thus it was that Hannah and I arrived in Somerset House, to meet Tara, with me in a twenty year old gardening cardigan of my mother’s, hedge-backwards hair, no make up, and Lettice in my arms. I really do not intend for Letty to become some kind of awful carried-in-handbag lap dog, but there’s no way I was leaving her in the car, and it was an open air event, after all. 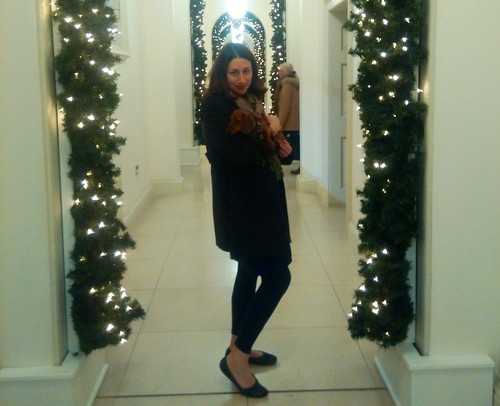 She was so immaculately well-behaved, although it was a little like being with, say, an amalgam of Kate Moss and the John Lewis penguin for the evening. She attracts cooing people to such an extent that it’s like being in a dovecote. She even got her photo taken by the official photographer. 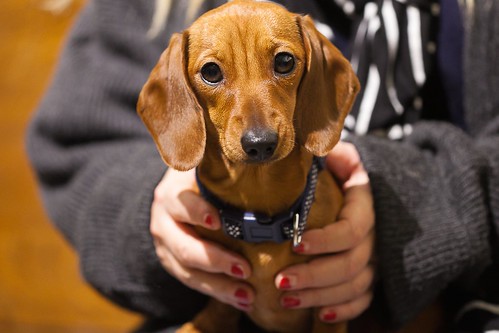 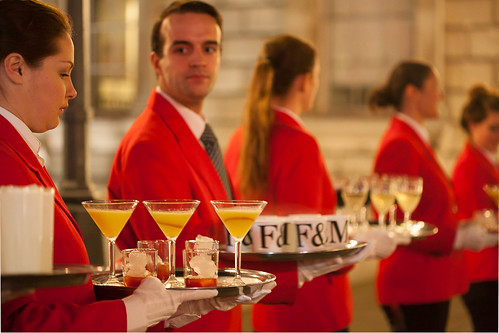 Of course, it being a Fortnum’s party, the food was beyond compare. The Welsh Rarebit fingers deserve a mention in dispatches, as do the hampers toted by the very polite waiting staff, who would raise the lids  as they approached you to reveal mini sliders, lentil burgers and other delights. 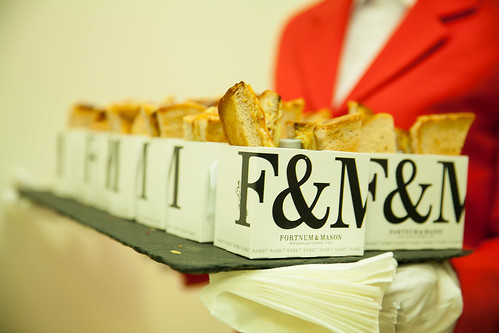 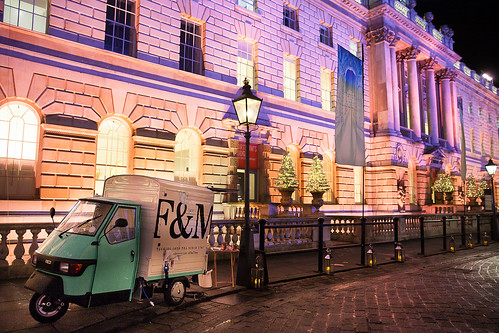 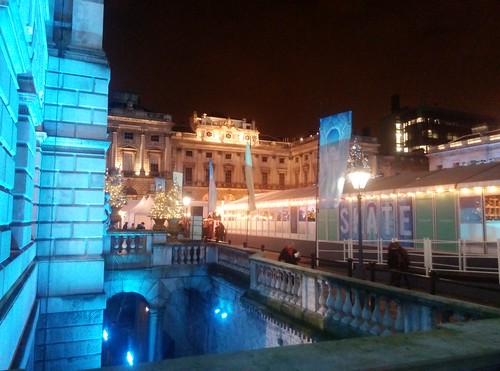 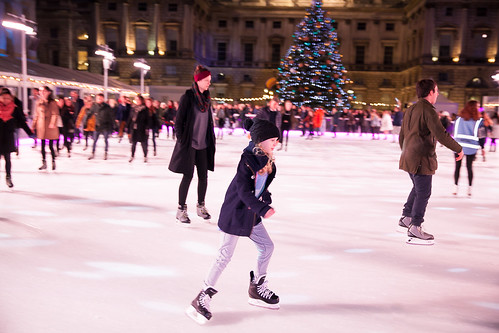 Apart from the usual rink-side bar, this year the West Wing of Somerset House has been transformed into a Christmas Arcade, a pop-up version of Fortnum & Mason’s flagship Piccadilly store. 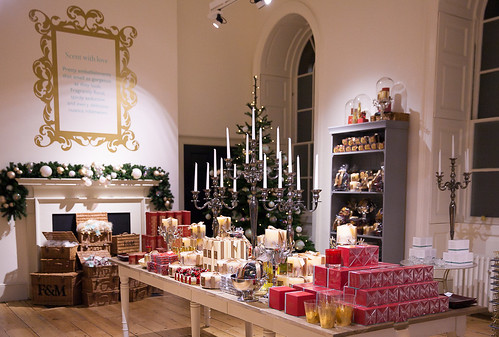 Each of the fifteen high-ceilinged rooms is dedicated to a selection of Fortnum’s signature products and festive favourites including an exclusive, limited-edition range of Skate at Somerset House products. There’s also a temporary restaurant and bar. 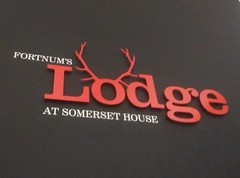 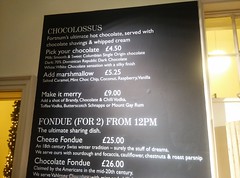 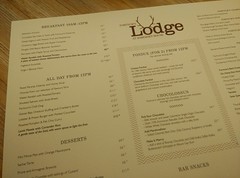 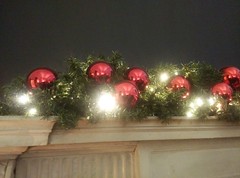 In the daytime they serve light meals, including the afore-mentioned Welsh Rarebit, sweet and savoury tarts, and a selection of rare blend teas. In the evening the bar serves vermouths, schnapps, cocktails and champagnes, tipsy hot chocolates and mulled cider, alongside sweet or savoury fondues. I will be returning to eat fondue soon. 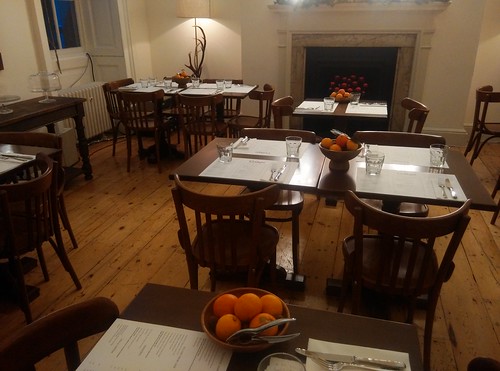 The next holiday season-y thing I did was go to the press night of the musical White Christmas with Tara on Tuesday night – that’s a double festive whammy of Tara and Christmas over two consecutive nights. 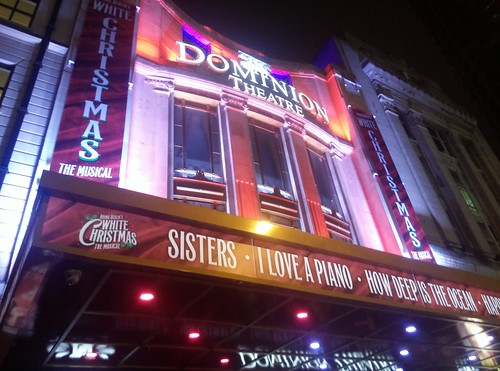 Irving Berlin’s White Christmas tells the story of two ex-army pals as they team up with a pair of sisters to put on a show to save a remote Vermont ski lodge that’s fallen on hard times.

The book isn’t the strongest, Aled Jones’ glorious voice at no point compensates for his wooden acting and dancing, (and his unflattering costumes don’t help), most of the cast seem incapable of holding an American accent for more than a sentence, (the most egregious examples sees characters talking in bad yank, then singing in posh English), the little girl part teeters on the edge of precocious irritation and, whilst charming Tom Chambers looks the part, and hoofs his way competently through the set piece spectaculars,  he doesn’t quite pull off the the devil-may-care insouciance his part demands.

But when a musical contains some of the greatest songs ever written, including Sisters, Blue Skies and, of course,  White Christmas, and the ensemble work so grinningly hard in their numbers, it’s hard to still feel like the Grinch by the end of two acts of such relentless good cheer.

If you have relatives and children to entertain over the next month or so, then White Christmas is a surefire way to get in the festive spirit.

Irving Berlin’s White Christmas is at the Dominion Theatre from 18 November until 3 January 2015, book your  tickets here.

London: Inside Battersea Power Station for the last time…

Ah, what a wonderful start of the holiday season! x

Wow! You have so reminded me to put our favourite festive dvd,s into a basket, and watch one each day. And to sort out Christmas menu,s ! Letty is so gorgeous too! Every year, someone or something lets the Christmas spirit in. We’ll this year, it has to be your 17th November blog!
Thankyou Sasha.x

OMG this looks incredible, totally going to be booking tickets. Wonder if I can blog and skate simultaneously?

Love the photos 🙂 Can’t wait for the festive season to begin! London is so beautiful around Xmas! X