My new glasses by Ralph Lauren at Vision Express 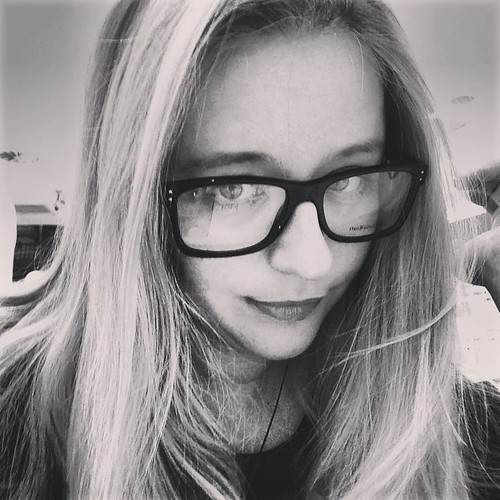 I’ve been myopic since I was a very little girl. My first pair of spectacles arrived well before my tenth birthday, and I was wearing gas permeable contact lenses by the age of fourteen. I’m so short-sighted now that, much to my horror, I was told at my last optician’s appointment that I now qualify for free lenses.

I tend to wear daily disposables, as my eyes are very photo sensitive, and I need to wear sunglasses on even cloudy days but, after years of contact wearing, it has been borne in on me that I must have entire, uninterrupted days of eyeglass wearing to give my oxygen-starved eyes a break.

So these are my new specs, courtesy of the nice people at Vision Express, who are the sole stockists of Ralph Lauren prescription eyewear in the UK. I prefer a heavy frame, so these are actually from the Ralph Lauren Polo Mens range.

And why am I telling you about my fantastic new eyewear now? I’m going to be in glasses for a few days at least because last week’s boring plague-visitation upon the house of Wilkins was neatly followed by an eye infection which saw me arrive at the Royal Free Hospital at 3am on Saturday morning, delirious with pain and lack of sleep, as my left eye poured tears, became increasing photo-sensitive and felt as though large pieces of grit were lodged under the eyelid. (Because I’ve historically had eye issues I now know to just get to the hospital STAT if irrigation doesn’t clear the grit feeling.)

I was in A&E (the ER for my American readers) until 7am, beside myself with exhaustion. Then back home again after seeing two lovely doctors,  for two hours sleep and then a return to the hospital  for the weekend emergency eye clinic at 1030hrs on Saturday am.

The diagnosis at the moment is an eye ulcer (a bacterial infection of a corneal abrasion, probably caused by grit under a contact lens, which can lead to blindness if not treated promptly.  The hospital eye docs – and I have this from the horse’s mouth – take these ulcers extremely seriously, so do take note: if you wear contacts and the teary-gritty-photo-sensitive thing starts and it’s not as far as you can see caused by grit, – do not faff about with over the counter eye creams and the such-like, or weeklong waits for a GP appointment, as you could do serious harm to your vision in the long run.

Anyway, I spent Saturday and Sunday administering eye drops on the hour EVERY hour through the day AND night all weekend. That’s been all the fun, and I am very bored with being unwell. (Sorry Holl.)

I’ll get a progress report at the Royal Free at 8am tomorrow (Monday) and hopefully the ulcer will have shrunk . Although it may be a flare up of the Thygeson’s Superficial Punctate Keratopathy I was finally diagnosed with in 2008 in New York, which can be mistaken for an ulcer, as mine were three times in a row between 2007 and 2008. The only problem is that SPK is treated with steroids, so if it is the hourly drops will have been a waste of time. Joy.

Here for your amusement is me (coincidentally) after the SS09 Ralph Lauren show in the back of a town car in New York in September 2008, when I was a fashion editor at The Wall Street Journal, suffering from a Thygeson’s flare up and unwilling to be seen in public with a red and inflamed eye. (Before selfies were even a thing, apparently I was taking them, something I am now glad of when it comes to remembering the past. But thank f&ck that this was pre-Twitter and that the only real street style photographer back then was The Sartorialist, who I remember quite clearly bouncing around outside the venue like a crazed elf at this particular show.) 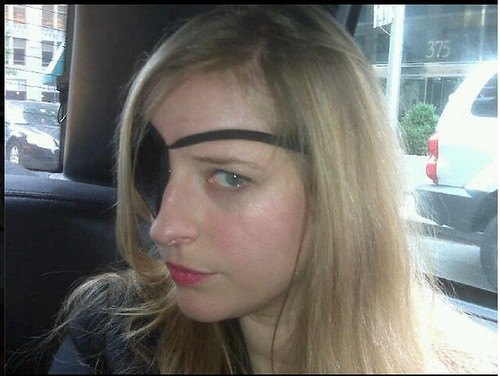 A Week in Northamptonshire

Ooh that sounds nasty. Hope you are back to good health soon!

o no poor you – whenever i have had eye probs i go straight to Moorfields Eye Hospital, so get yourself referred there if you are still unsure about the initial diagnosis. Get well soon!

Oh I used to get corneal ulcers: a golfball covered in velcro under the eyelid was my experience. Highly allergic and dry eyes sensitivity, so I only wear contacts for ballet classes. Glasses all day every day otherwise which can be annoying. Steroid drops help. Hope it eases up: I have a little bit of scarring but the opthamologist checks regularly and says no need for a white stick yet! But commiserations: corneal ulcers are really painful. And of course if your job is reading & screens, really really boringly you can’t work for a day or two.

That is just awful – poor you.
Wishing you well and a speedy recovery x

There is a wonderful natural product called Vita Fons which I have been using off and on for many years. They have a water which I have used and it always clears conjunctivitis . This V F product is pretty miraculous actually. The cream immediately heals burns (I have scalded myself with boiling water and used it) and the cream has also performed miracles on the most horrendous tooth ache and when applied to the chest cleared a really heavy chest cold.
Look it up on line.
The water is a bit stingy when put into the eye but it really does work.
Good Luck
Cassandra
http://www.cassandrastruthers.com/blog

Just a medical note: corneal ulcers are not conjunctivitus and shouldn’t be treated as such. Completely different area of the eye, and cause.

A couple of summers ago I was on a fellowship at Yale University and felt something go into my eye. I was positive it was en eyelash or something of the like and ended up going to the Yale teaching hospital for an examination. Long story short, I was advised to get tested for a variety of diseases, including lupus, and put on steroids the size of horse tranquilizers. When I returned to New Jersey several weeks later, a family opthalmologist found and removed an eyelash. Cured.

Wishing you infinite continuing years of excellent eyesight, without any disturbances.

Can you tell me the model number of these please? I have a high prescription as well and need to get some new frames. I love the look of these.