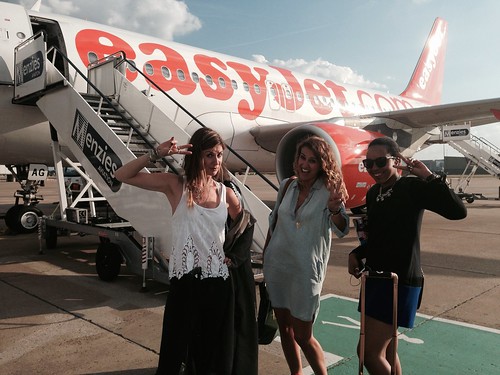 So on Tuesday I went on the world’s shortest press trip: two hours sitting on an orange bus before de-planing and heading home again. Thank you French air traffic control. You really are dicks.

I was supposed to be flying to Mahon on Menorca, for a 24hr trip to visit the home of lovely Pretty Ballerinas, with two fashion editors and their UK PR, a trip that had been planned for weeks, with much finessing of dates and moving around of things to make it happen. Ha. 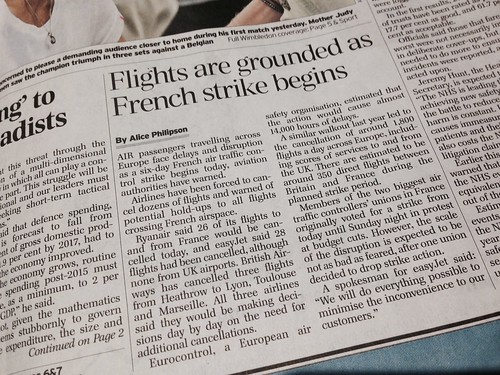 Our flight was supposed to depart at 1350. When we arrived it was already delayed by at least four hours. And Gatwick  Airport South Terminal in high summer on an air strike day is very much not the airport in which to be delayed. The terminal is small, there are bugger all power points, gangs of sugar-ramped feral schoolchildren from multiple nations roam the halls, screaming infants, and hot, cross and bothered extended families desperate for their well-earned holidays are discovering that they are going nowhere fast. 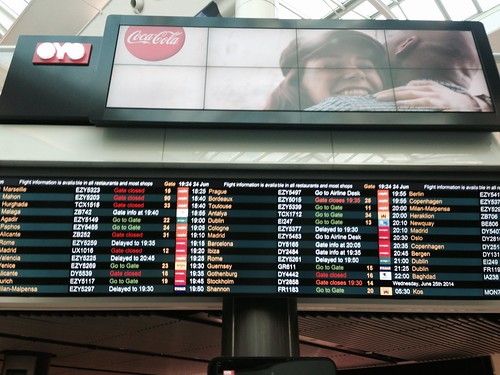 Desperate for power for my failing laptop so I could work, I coughed up £30 and spent the afternoon in the haven of the No 1 Lounge, with this sunny view taunting me. 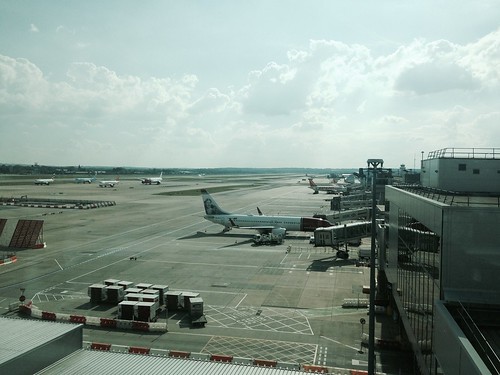 Around 5pm our flight suddenly announced it was closing, and we sprinted like madwomen to the gate and thence to the bus to the plane.

And then we sat on the plane for two hours, cooking in the sweltering heat. The Easyjet pilot very charmingly explained that the baggage handlers had smelled gas in the hold and that five fire engines were making their way to us as a safety precaution – because once you report something like this at an airport, a massive protocol rolls into place. This meant we lost our departure slot (although we all suspect that that was a gloss of the truth, as he then told us there was no way we would be departing until 9pm. NINE PM! And that was if everything down below was sorted in time.)

There was not a lot of goodwill to the French at this point. In fact none whatsoever. The plane was sauna-like, as the air con had to be switched off because of the fire service investigation down below, and the realisation was gradually dawning that, whilst we may eventually arrive some twelve hours late, there was zero guarantee that we could return as planned the next day. There is just one Easyjet flight a day, and if a plane can’t get in, there isn’t one to turn around for home.

I had a dinner last night in London, a meeting this morning, and am leaving for Paris at lunchtime – on a Eurostar no doubt crammed with airport rejects, so I had no choice but to cancel.

So the four of us de-planed, along with six or so others, who, like us, were only away for a 24 or 48 hours and couldn’t risk being stranded. We waited for quite some time for transport back to the terminal – and huge thanks to Gatwick Aiport – well, Menzies their ops people, who really were fantastic at this point, finding two estate cars to get us all to the terminal, as there were no buses available. 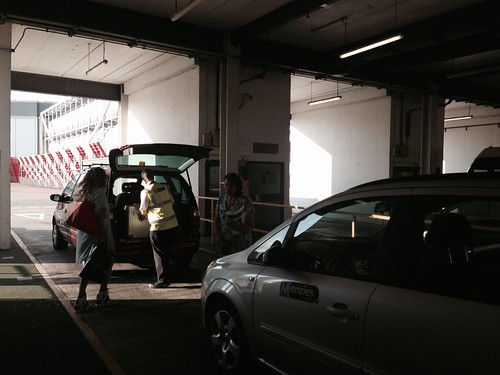 Meanwhile Departures was in chaos thanks to the bloody French air traffic control. Downstairs was reasonably calm. 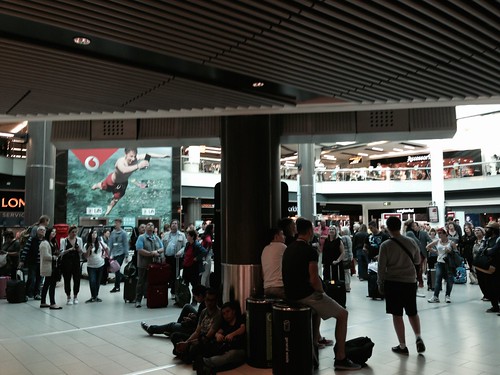 Upstairs, by the very small airline desk, was not. 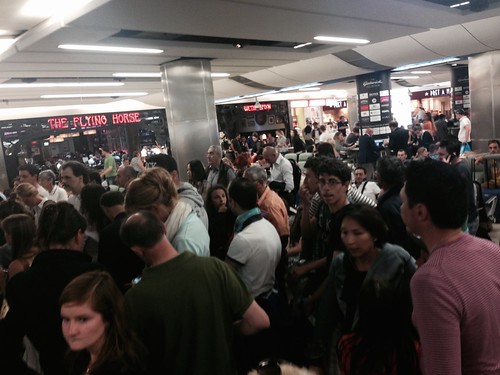 We weren’t allowed to leave the terminal without an official escort, as we needed to clear both immigration and customs, and we waited for a Very Long Time – Easyjet had just two harassed reps on the counter, and plane loads of cancelled passengers with which to deal. Eventually a Very Nice Man arrived and herded our group through multiple behind the scenes and deserted corridors to Arrivals, where a dedicated Immigration lane had been set aside for us (thank you Gatwick!) and FINALLY we were free.

I eventually arrived home EXACTLY twelve hours after I had left.

LLG for eBay Collections: From clocks to Le Creuset

My Week: Cartier in Paris, Shanghai Tang in London, & The MS Trust at The House of Lords

Paris for the day

Well that brought back lots of memories . The frustrations of air travel . We did enjoy our worldwide holidays & would encourage everyone to explore but don’t pine for it now . These days we fill the car with dogs , head for Scotland & love it . And you weren’t even on holiday – how well you described it though – loved the bit about the feral children

Jesus, I could write a book on airport trauma, but this sounds just horrific, esp. since you were trying to go to Menorca. Literally waving a paradise island in the face of sweaty sardines stuck a plane– I’m surprised a riot didn’t start.

But enough of that!

I AM GOING TO MENORCA TODAY!! I’m flying from US to Barcelona and getting the ferry from Barcelona. I lived in Barcelona for two years way back but was always skint and so never made it to the islands. Do you know where the factory is for Pretty Ballerinas? Please let me know if you have time! Thanks!

Well, I am JEALOUS. You can’t miss the factory: it only takes 45mins to drive from end of the island – Ciutadella – to Mahon on the other, and the factory is in the middle off the main road, in Ferreries. Happy shopping! PS it’s called Mascaro, as that is the parent company.

What a nightmare for you Sacha. I don’t know how you managed to put it all down in writing…didn’t it just make you even more grrrrrrrrrr????
I’ve just returned from living in France and any time I had a booking on the airport TGV coming up I’d be checking for strike action on a daily basis. It’s not as if the strike action ever results in anything other than raised stress levels.
In the end I never booked on a Wednesday or Thursday as that’s the usual option for a strike to create a nice long weekend. I know I know. Grrrr again.
X
(Need to bring out my inner pedant here but de-plane? De-plane?
please please….disembark. On reflection, probably not a good idea to mention that in your current state….love your blog….)

Well, that was a nightmare! And a work trip. 🙁

I have given up holidaying via airports too – UK is well worth exploring. Currently ticking off our cathedral towns. But those poor people stuck there with their kids…and not even easy to leave..

Oh, this brought back some bad work travel memories from being stuck on a plane when Chicago was snowed in – yet again! They used to get you on the plane just in case they at some point in the next two-six hours they’d have cleared the runway and got through the de-icing line. The A/C was off and there was no food or drink to be had. You just had to sit there strapped in your seat for hours! After some appalling RyanAir flights in the UK (delays, herding, standing in queue for hours, rude staff, landing 3+ hours’ drive from where I actually want to be, fellow passengers who’s never flown before, etc) I refuse to fly them. EasyJet and Norwegian are as cheap as I get. I get really excited whenever I fly a “proper” airline, where I can check a suitcase, get fed, even receive an alcoholic drink!

WoW! Who knew you were planning a 12 hour field trip to explore Gatwick??
What a gem of a day!!!
James

Funny (not really) I was just thinking the other day, well it is almost the school holidays so surely it is almost time for the french air traffic controllers/passport staff/ferry workers to strike & lo & behold 2 days later heard the news on the radio. You can set your annual calendar by them can’t you? They are like some antiquated left over remmants of seventies socialism. They are so backwards in their work ethic & customer service is an unknown quantity in France & they work the least hours in all of Europe & yet they still think they are so hard done by. And yet…. I love France & even the French (not the snooty parisiens) & have a sneaking admiration for the way they have the cushiest livestyle & social benefits system which they guard at all costs. I am guessing you don’t share this admiration right now – sorry. 🙂

I can totally feel your pain. It almost happened the same to me, I was about to set off for the airport for a blogtrip in France when I got the news. The good thing is that I knew it before arriving to the airport. The very bad news is that the blogtrip has been postponed to July, when I won’t be able to go. 🙁

I was ‘stranded’ in Seville because of this last Tuesday; can’t complain (thought Ryanair’s handling of the situation was dire) as I got 48 extra hours in the sun! The impact your way round sucks, though.