Food: Puffed Up (with its own importance) Mushroom Omelette 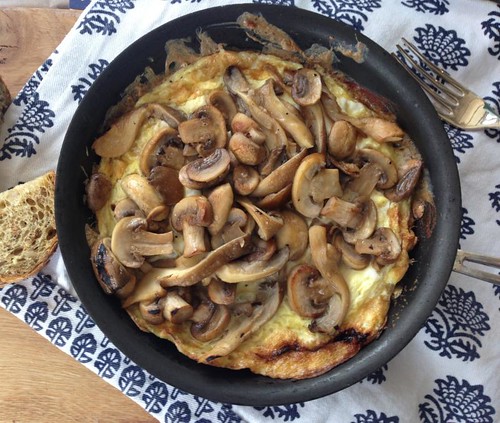 I’ve been making this so often that I think mushrooms might start sprouting from my ears. Its delicious appeal springs in part from the way in which the top of the omelette puffs up like a souffle under the grill – although it collapses very quickly – I couldn’t capture its puffiness on film, because by the time it had stopped steaming up my lens, it had gone flat!

Mushroom omelettes are tricky beasts: Sometimes the mushrooms suffer from being folded into the middle of the omelette, and become a little, well, claggy. And, horror, sometimes they are either cooked in the egg batter from the beginning, so they become leathery (that’s a diner trick), or they are not sauted properly first, so they end up tasting raw.

The secret is to always saute the mushrooms separately in plenty of butter and a little oil – this stops the butter burning, and to season them well with crunchy Maldon salt and several grinds of black pepper. 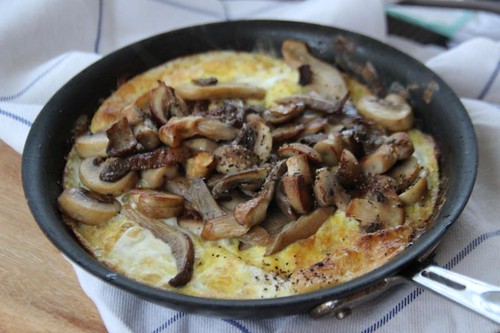 I find a small pan like this takes about three eggs, and this is enough for two people for lunch with a large green salad alongside – I like soft butter lettuce – (Webbs in the UK, Boston in the US), mixed with an avocado, peeled and chopped cucumber, and lots of chives snipped over all.

Do make sure that your omelette pan has a metal or heatproof handle as otherwise it WILL melt under the grill.

Simply beat together the eggs vigorously. Place two pans on the heat, one with a knob of butter, and one for the mushrooms with a large spoon of butter and a splash of oil – olive or rapeseed, for preference.

Throw the mushrooms into one pan, and cook gently until soft. Season well.

Turn on the grill to top heat.

Whilst the mushrooms are cooking, pour the egg mixture into the pan. As it starts to catch swirl the egg mixture around the pan, scooping the cooked edges up, and allowing the uncooked egg to swirl underneath. When it seems as though the bottom is cooked, and lifts up, tip the cooked mushrooms onto the top of the omelette, and whip the pan on a high shelf under your hot grill. Keep an eagle eye on the pan: you want a puffed up edge, and a slight crispiness to the mushrooms, not a chargrilled omelette.

Serve with a green salad. 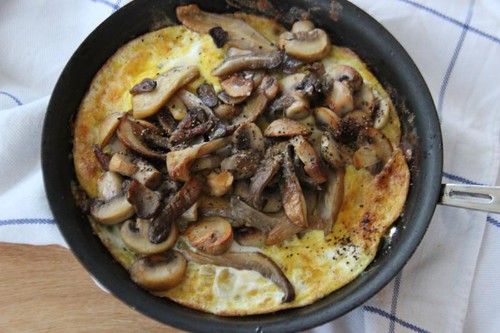 Blast from the Past…

Recipe: The Original Superfood Salad from the Leon cookbook

Love your recipes Sasha , not just because I’m a non meat eater too . They are never over complicated & always very tasty . Alot of your favorites are my favorites – more please

I know what I’m having for lunch this weekend now! Thanks for sharing Sasha.

this looks great as I love mushrooms! sometimes we have omelettes for dinner
great recipe ! Thanx !

Goodness this looks amazing! I am so hungry right now

Love mushrooms… love your blog. But am missing the more regular updates 🙁