Oh I did pack badly for my six night stay at The Farm at San Benito in the Philippines. Never knowingly under-provisioned, I took full advantage of Malaysia Airlines’ stonkingly generous 30kg allowance for Economy. * Now that my trip is over and I’ve realised I could have taken half the amount of stuff with me, I thought I’d write a guide to what to wear. Not least because I have had several queries about what I took with me. I also reckon that this guide would apply to any resort in a tropical climate, not just The Farm.

My biggest single mistake was taking enough gym kit for six days of rigorous exercise.  As it turned out, the combination of a restricted diet programme, the heat, a schedule of two-three spa treatments a day, and insane jet lag meant that I spent a total thirty minutes in the gym (on day one having a fitness assessment, which was not actually necessary – I’m well aware that I am 50% lard and 0% fit), so those multiple sports bras, leggings and Ts were a massive waste of packing space. The best thing to wear in any warm jungle-y holiday environment are shorts and long sleeved cotton shirts, or long sleeved cotton shirt dresses.  (Really trousers are best but, euf, too hot.) The mosquitos in the evening are rampant, and you want as little flesh on show as possible – and it’s better not to have to DEET every square inch of skin if you can avoid it. I pretty much stayed indoors behind screen doors from 4pm onwards, but the spa is open until past 9pm, so I had at least one ten minute walk there, and back again, in the dark each evening.

I stupidly only packed one pair of shorts: I needed at least four pairs. But I did manage to remember plenty of cotton shirts, which I then had nothing to wear with. DUH.

Anyway, I picked up these two great shirts from Gap the day I left – pictured above: Navy cotton Swiss Dot shirt  £29.95 and Pale Blue Gingham shirt £29.95.  I also bought this navy Henley, which was great for travelling in (lovely soft rayon) with jeans.

The only thing you need for your feet are good flip flops. I wore the green Havianas I bought in Rio last summer every single day, as they are most practical in a spa environment. I also took these beautiful leather Aspiga ones (at top – £45), for lounging about, that I bought when Aspiga donated to our charity shoe sale last year. (Aspiga have a great ethical policy – you can read more about it here.)

With two or three full body treatments every day your clothes get dirty pretty quickly, as you are pulling them on over an oily bod, so you want to pack at least three changes of underwear per day. (I ran out.) You can only wear cotton sundresses and shirts once each for the same reason, so count on two changes per day.

I also envisaged quite a lot of wafting around the public outdoor pools in swimwear, sarongs and long tailed cotton shirts, but it wasn’t really that kind of place – in a week I saw just one person lying on a sun lounger. As there was a mini pool in my villa compound (spoilt), there was no need for pool coverups, and I ended up swimming topless in bikini bottoms three or four times a day, as I would never, ever do this in public, and relished being able to do so in private. So that huge pile of pool kit went completely unworn. I packed enough insect repellent and sunblock to coat a battalion of marines on jungle training. This high SPF by Riemann (£12.95) is great sun protection, and my sensitive skin doesn’t react to it. Although it’s an effective once a day, super waterproof product, I was being scrubbed a lot in treatments so needed to reapply. But, because I wasn’t in the sun often, I only needed one bottle – not the three I took with me. Likewise I only needed one bottle of DEET  – not two. There’s a lot of downtime in the evenings, so I’m glad I took some face masks with me. I love these Wei Gingko Leaf Repairing Treatment Pads from SpaceNK (there are six in a pack, and I used one each on the four plane journeys I took on this trip). 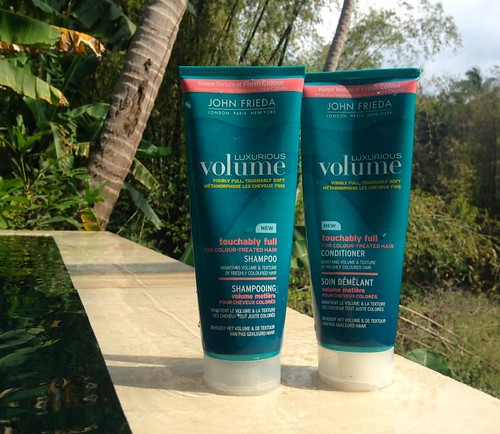 I regret not taking any hair treatments with me – there is a pile of Ojon oils and masks mocking me in my office right now.. My hair also didn’t like the in-house coconut conditioner, so it was a wise move taking my own John Frieda shampoo and conditioner. And take large sizes, as you will wash your hair at least once if not twice a day, because pretty much every treatment involves oil somewhere near your head. (I cannot bear having greasy hair.) It’s not that humid in the evenings, so I was glad I took a nightie to sleep in – I never have aircon running at night, preferring the gentle swish of a ceiling fan. Oh and take a sun hat, so you can enjoy the wonderful walks around the property during the day. Mine is a Panama-style I picked up at an airport Accessorize, which folds flat-ish to no ill effect. I buy a new one each trip – it seems to be a repeating style and at £15 it’s a bargain. I completely eschewed makeup all week, (I wished I had had time to get my eyelashes dyed before I left), just adding a dab of  Laboratoires Filorgia BB cream to tone down the redness: my rosacea has been playing up of late.

However, my lips get terribly dry, and they have absolutely no natural colour, so I was glad of these new lipglosses from Smashbox that I was given just before I left. They aren’t at all gloopy, and the shades were pretty enough to add some colour to my face without looking inappropriately all made up.

*(I was Business on the way out (40kg), but I was ticketed on an if-it’s-available upgrade on the way back, so packed for Economy.)

Travels: From Manila to Kuala Lumpur

TEDWomen: And so it begins…

It is SO refreshing to read that I am not alone in my tendency to overpack and/or overload on some items and not have enough of others! This is the sort of practical article I yearn to see in women’s magazines in the summer editions when they all start to bang on about packing the perfect capsule wardrobe

You should try taking with you Pro Naturals shampoo and conditioner. They also have argan oil that is use after a shower and you will leave it in. It’s not greasy or anything so you will love it and it will keep your hair soft and healthy. Get them online!!