I met an old friend, Monsieur Avocado, for catch-up drinks (well, a chili cilantro margarita for me, a club soda for him) on the Soho House roof deck a few weeks ago. He was slinging around a particularly unsavoury ripped & shredded falling apart black nylon rucksack which, surprisingly, even he agreed needed to be replaced tout suite. (The surprise stems from the fact that I distinctly remember that, although a pretty snappy dresser, he had holes in the soles of his shoes when we dated.)

Although he continues to maintain that I wrote this post about him, (I didn’t), he appears to trust my taste enough to come up with a series of alternatives to the urban backpack worn over both shoulders which I described thus:

“The quickest way to look academically challenged. It’s time to leave behind the wipe-clean trappings of childhood and buy a Proper Bag.”

He’s now emailed me twice to remind me that I offered to come up with some manbag ideas. So, to save him turning up on my doorstep demanding the list, here are the criteria: when he’s not ignoring the subway on his doorstep in Brooklyn to take $20 cabs into the city, he walks to and from work so he needs a sturdy bag to carry the astonishingly amount of stuff he he deems necessary for a day in the badlands of Manhattan. He’s willing to spend what I call proper money for something good, and we are looking for durable leather, as opposed to cheaper canvas. (Altho I have included one waterproof bag for variety.) I only really like satchels for men, so that is what I have focused on.

First off is the Mulberry Barnaby in Chocolate (also comes in Oak & Black) $650 or £425 which has a canvas strap & suede interior. I rate Mulberry bags extremely highly for quality & durability. (I have the Mulberry Anthony which just gets better as it gets older. Yes, I know it’s a manbag but the girl version is too small for my liking) 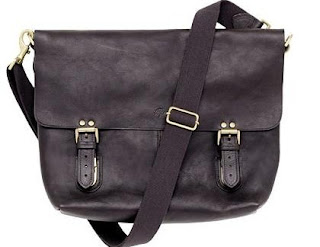 The J Crew leather postal messenger bag $595
This is a recreation of the oil-tanned mailbags carried by the US Postal Service from 1868 until the 1970s, when the original leather satchels were replaced by blue nylon bags. 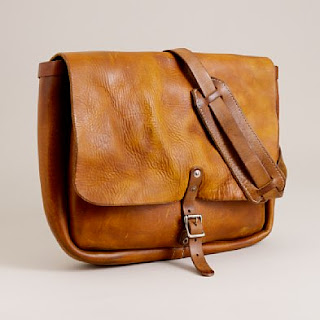 This is, of course, an investment piece for those with inverted fashion snobbery of the ‘shiny and logos are not for the cognoscenti’ school of thought.

For those with a smaller budget, and with less tendency to over-analyse their purchases, may I suggest the above bag’s little brother, the J Crew Artisan leather messenger bag $225, made to a traditional Florentine craftsman’s design, 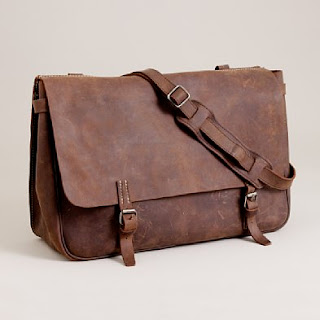 Wee Birdy first alerted me to Mimi’s bags, so here is something for my British readers (altho she can ship abroad too). This is the Mimi Baggins in waxed oilskin £177 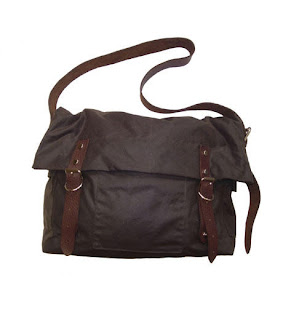 If money really is no object then the deerskin Prada Cervo Messenger Bag $1,750 is an investment buy. Prada leather is always beautiful and, unlike many of their competitors at similar price points, Prada bags last & last. 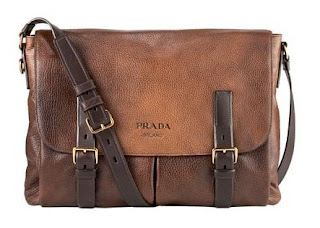 Um, do you absolutely HAVE to be a man to have these? Cos I love 'em xx

I need to get MrB a new man bag. Ooh, maybe I need to do it ASAP for our anniversary today.

Thank you, LG, for the man-bag suggestions, and also for your tacit admission that your Sept. 17th, 2007 hate-post was written partially with me in mind. These are beautiful bags.

Here's my problem: I walk a lot, as you say, and this man-bag needs to be suitable for that. I'm concerned that I will sweat all over it (my walks are, minimally, five miles, and I do these walks in the heat and humidity of summer in New York), thereby ruining it and also making it smell like a locker room. Men have to think about these things when choosing a man-bag (and btw, I would say that the word "man-bag" is DEFINITELY hyphenated).

Maybe I'm over-thinking this — you've accused me of that before, possibly accurately — but I'm not over-thinking the fact that I don't want for my man-bag to smell like the dorm rooms of the hockey players at my high school who kept their hockey gear IN THEIR ROOMS.

I like the first J.Crew one! Here in Canada we have a store called Roots ( I think they have an American website) that makes gorgeous leather manbags…I can definitely vouch for the quality and durability of their women's bags.

V. nice selection, indeed. Would love to get my hands on a Mulberry – or a Mimi at a pinch. xx

I'm with Clare, check out the Roots bags. I think I told you about their flat bags a while back. The leather is gorgeous and they last a lifetime or until something new comes along but then they always come back in style. I have Roots purses from twenty years ago that I still use and some I remember with a sigh and wish I hadn't gotten rid of.

A good satchel (not briefcase) is part of my everyday life during the school year. I've long loved the Mulberry bags and am tenpted by the J Crew mailbag (malebag?) but can't quite wrap my mind around spending that much on one Crew item. J Peterman also does a mailbag in lovely leather (I wish it had interior dividers, though . . .). And Roots used to be terrific, I agree!

I've never in my life carried a ladybag, and this lot are right up my street…I suspect I'm going to place this lot on the wishlist for 'one day, when I have a salary'..

Cari (Is Not Fashion)