I love making meringues: I have a passion for that dense marshmallow-y chewiness in the interior you can’t get in commercial or restaurant offerings. When I was little, my mother, the ace cook, used to make them in the Aga using the recipe from Delia Smith’s Book of Cakes and sandwich them together with dense whipped cream for birthday parties. 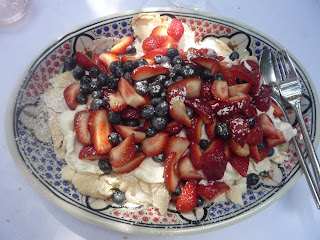 Today I made a deconstructed Eton Mess, an English fruit, cream & meringue concoction of utter simplicity. (Traditionally it shld just be strawberries, but I like a mixture of berries, and served all tumbled together.) To make the meringue base I use the following recipe, which makes two baking sheets of meringues, & which reads as follows:

Preheat the oven to 180C/350F. Simply beat the egg whites with a pinch of salt till they are super fluffy, then, keeping the motor running, fold in the sugar a spoonful at a time. Then fold the vinegar, corn starch & vanilla into the glossy mixture. Then heap large spoonfuls (or pipe if you can be bothered) onto baking parchment onto two baking sheets, turn the oven down to about 150C/300F and cook for 30 minutes.

(You shld know that humidity can stop them rising so much, but that doesn’t matter for this recipe as you will be breaking them up when cold anyway.)

Turn the oven off and leave the meringues in the cooling oven for 30 minutes to an hour. 30 minutes gives super marshmallow-y centres, the longer they stay in the oven the drier the centres. 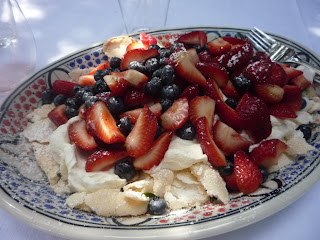 To make LLG’s version of Eton Mess, quarter a punnet of strawberries, and tip half a pint of blueberries into a bowl. Sift over a tablespoon of icing (confectioner’s) sugar, & mix into the fruit. (This gives the fruit a lovely glossy sheen, adds some syrup. and stops it from drying out.) Pull the meringues into large chunks, and arrange on a large platter.

Whip a pint of double/heavy cream to soft peaks and spoon over the meringues. Then tip the fruit over the lot, along with any juices. Sift a dessertspoon of icing sugar over to serve. Fresh mint would be nice to garnish but I forgot. Eat. 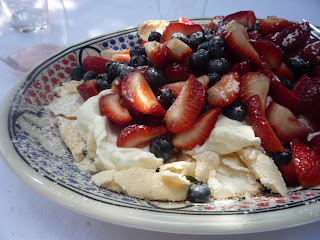 I was convinced I had made way too much for five people, and actually didn’t use all the meringues. I should have done: 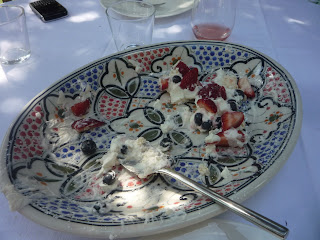 That looks fabulous. One of my fave desserts. I've never made my own meringue but will have a go now. Yummy.

That's the prettiest Eton Mess I've ever seen. My girls love it, and we make it quite often, but it doesn't look anything like yours!

My meringues always fail, but I shall try again. This looks so delicious.

That looks amazing! How do you stay so slinky?!

Sweet baby cheeses, this looks spectacular. Well impressed you made your meringue from scratch (I, on the other hand, bang up some ready-made stuff from Konditor and Cook!) X

The dessert looks scrumptious but I am really curious is where you got that darling patterned serving dish? I love it, please do tell!!

I've had lots of questions both on LLG & on Twitter about the serving platter in this recipe.

I'm afraid the answer isn't partic helpful: GG with who I am staying and who kindly lets me bang around in his formidably well-stocked kitchen & larder, brought this and several bowls back from a business trip to Jordan. LLGxx

Made this yesterday for the spoof 'Come Dine With me' that we're doing with selected office peeps. Never has so little effort been rewarded with so much adoration. They were even taking photos of themselves with The Mess. Helped that it was also delicious….

If anyone makes this, let me know!

Slacker – did you make this recipe? LLGxx