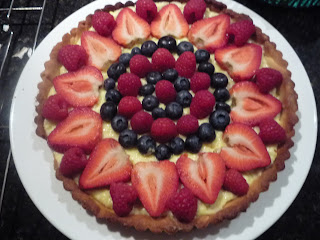 We celebrated Y’s birthday yesterday with a supper for four of us, which I cooked as part of my present for him. The piece de resistance was pudding, a classic French fruit tart with a strawberry puree.

I made this! I’m beside myself with glee. My first ever fruit tart!

Whilst I’ve been making classic quiches for years with great success, I’ve always been a little scared of making a proper patisserie type tart before. They require two ingredients which are notorious for going wrong: pate brisée, an extremely short, buttery pastry (which can be a pig to work with as, if you get it too short, it has to be pressed into place rather than rolled) & creme patissiere, proper confectioner’s custard (which splits if you so much as look at it the wrong way).

It doesn’t help either that my mother makes extraordinarily good pastry, and thinks nothing of knocking up a tart at the last minute. Leave it to the experts I’ve always said, or do as the French and buy one from your local patisserie.

So, I’ve never made pate brisée or creme patissiere before. As I don’t like hot eggy runny custard, I always presumed that I didn’t like creme patissiere. How wrong was I? Last year I discovered that I loved it. After all what is there to dislike about a pastry filling that consists of eggs & sugar?

Anyway Y intimated that a tart would be extremely acceptable as a birthday cake, and I didn’t like to admit that I’d never made one before. I consulted their rows & rows of cookbooks. Of course, the baking book, Gateaux de Mamie, would be in French, and there was no recipe for tarte aux fraises, or strawberry tart. Still nothing daunted, I found the separate recipes for pate brisée and creme patissiere & set to work.

And blimey, if they weren’t the most ridiculously simple things to make. (If you ignore the fact that i had to keep converting the measurements to Imperial on my Blackberry.) Ignoring the instructions to make the pasty by hand, I just threw the pastry ingredients (flour, an egg yolk, icing sugar, a little salted water) into the Magimix, keeping an eagle eye on it so the pastry wasn’t overworked. The moment it came together I dumped it onto a floured board, pushed it into a ball, wrapped it in clingfilm and popped it in the fridge to rest for an hour.

The custard was even easier. I had to wing it a bit as the recipe called for French soup spoon measurements & I had no idea if this equated to tablespoons, so I just guessed that it might. I heated 500ml of whole milk with a splash of Bourbon vanilla, meanwhile beating together four egg yolks with 6 tbsps of icing sugar and 4tbsps of cornflour. When the milk was simmering, I slowly dribbled the egg mixture onto it, whisking away. It immediately thickened into perfect creme patissiere. I scooped it into a dish & left it to cool. And that was it.

After the pastry rested I rolled it out to a disc an inch wider than the 26cm greased, nonstick, fluted,loose bottom. metal tart tin, (why on earth do people use china tart dishes? Makes for soggy pasty), flipped it into the tin, pressed it into shape and trimmed the top. No baking parchment or baking beans to weight the pastry as it cooked so it wldn’t rise, so I improvised with tinfoil and rice. Baked it at 180C/350F for 25mins (the book said 15 but it was still soft then), and slid it off the tin base and onto a wire rack to cool.

I did slightly overcook it, but better browner & crisper than pallid & soggy I guess. When the pastry shell was cool I tipped in & spread out the custard, and spent a fun 5 minutes decorating with half inch slices of strawberries, blueberries & raspberries.

I had a punnet of just going over strawberries in the fridge, so I used my mother’s technique of hulling them, cutting off the bad bits, & throwing them in the Magimix with some sugar and lemon juice. Whizzed into a puree, this is ambrosial.

Gratifyingly, the boys all had second helpings.

That look soooo delish that it has awoken my appetite, which has been vanquished by swine 'flu.

I will have to order something…

I love it when experiments go right! And it looks oh so pretty too!

Well done! Very scary ingredients, yes. You're efforts have assured me that I will never make a tart.

It's a thing of beauty! You're my kind of baker. That's the way I do everything – follow a bit of recipe here, improvise there. I mean, I don't improvise with the flat science, but I take some liberties (no pun intended) and it works out more often than it doesn't…

I adore fruit tarts too and enjoy making them. What I don't understand are the recipes that call for a gelatinous wash atop all the lovely fruit. I once whipped up the gelatin but quickly discarded it in favour of the au naturel look (and taste)!

Why thank you everyone! I know I am foolishly proud of myself. I actually made this last of all because I was so scared. Can't believe it turned out so well!

And yes, gelatin toppings? YUCK. I hate it when they are so thick you can actually peel them off. They add nothing to the taste or texture. I suppose they may stop fruit and the custard drying out overnight or if on display in refrigerated cases. So, yet another reason to make for self. Also cost: the pastry cost well under a dollar to make, the custard too. The fruit isn't so cheap, but you need very little and you can make this with apples too. I like apple sauce with apples fanned on top too. LLGxx

looks phenomenal. bet your friends were licking their fingers. xo

That tart is a work of art!