I was in two minds as to whether I would actually get on the plane to Geneva on Monday morning. When I booked the flight a month or so ago from LA, an 0630hrs departure from Luton seemed do-able. After all my parents only live 45 mins away.

WHAT WAS I THINKING?

A 24hr trip to Switzerland, arriving back the evening before I left again for Heathrow and Manhattan? I must have addled my brain in the California sunshine.

Because of course what that 0630hrs flight actually meant was me failing to sleep before midnight, being woken at 0200hrs by the cat kneading my thigh with its needle claws, and then whiplashing myself into consciousness at 0355hrs when the alarm clock went off under my pillow.

No one could accuse me of being a dilatory dresser: I was up and out the door in a flat five minutes, still excavating the sleep from my eyes as I put my foot down on the gas in my father’s MX5 and headed for the M1.

I was barely functioning on arrival at Geneva, so thank God for Swiss efficiency. The train terminal is right next to Arrivals, and a monkey could work the ticket machines. One aller simple ticket later and I’m sitting on the platform with my laptop and handbag (all I took were clean knickers & a swim suit, four packets of Xtra Strong Mints for Meriel – don’t ask, and my toothbrush) waiting for this rather nice train to arrive. 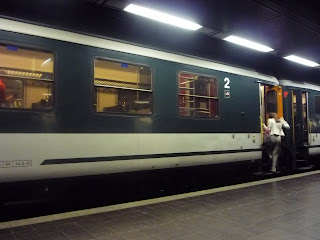 Some time later I get to Lausanne and Meriel & infant whisk me off to Café Glancy in the city centre for nourishment (highly necessary for anyone who refuses EasyJet’s overpriced refreshments trolley). My previous memories of Lausanne seem to be mainly of glove shops and staggeringly expensive bistros, so I’m glad to see that Café Glancy is a coffee shop restaurant in the laid back squishy sofa dudes playing on macs mode. It’s still expensive, but then everything is expensive in Switzerland.

I vacuum up a rather nice chanterelle & tomato risotto, 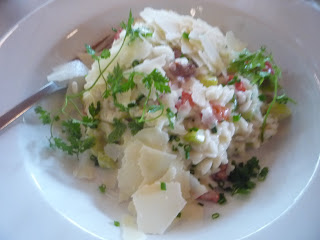 and M has a foie gras & Carpaccio salad – she claims that this is diet food. 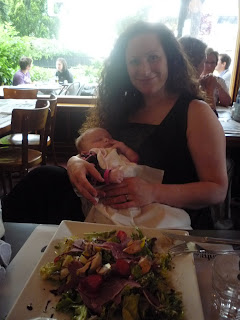 Then as I am officially now on holiday I study this pudding menu. (Check the prices: basically ten Swiss Francs is just about ten dollars. OUCH.) 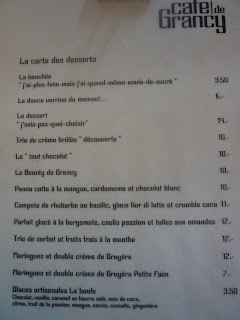 I’ve had recent complaints from readers who don’t speak French so let me (colloquially) translate the utter naming brilliance of two of the dishes:

La Bouchée: J’ai plus faim mais j’ai quand meme envie de sucré”
“I’m no longer hungry but I could do with a little sugary something “ (M has this: a tiny crème brulée)

I order Le Tout Chocolat, which looks like this (in the top left corner is M’s Bouchee), 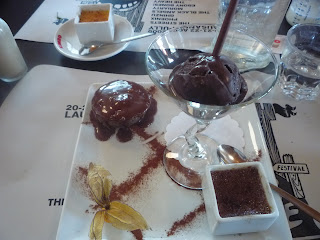 And which is an exceptionally good warm dark chocolate cake with chocolate sauce, an ambrosial ice cream, which appears to just be a smooth frozen custard, and a wonderful creamy, dreamy cross between a chocolate mousse & a crème brulée. 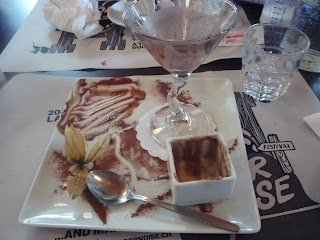 I think aliens stole my pudding.

Look what lovely Cassandra gave me!

Travel: Hanging out at Sri Panwa, Phuket with Rachel

I amazed it took you that long! 🙂 What a beautiful dessert sampler. And the risotto looks delish. And what a lovely photo of your friend with her baby. Beautiful baby!

You have amazing adventures!

Awww… I miss Lausanne. I used to live there and it is at least as pleasant as it is surprising to read something about this sleepy town on your blog. Next time you are there, send the aliens to check out Blondel Chocolatier in Rue de Bourg. They make the best chocolate, in my opinion. And I tried them all 🙂

Loved the icecoupe with its Dali-esque stem.

oooooh you where in switzerland… as metropolitan mum before me i was suprised to see lausanne on your blog and i'll now have to check out both recommendations once i'm back. even though i'm not looking forward to the swiss prices after getting used to the french ones…