I am gloriously home alone this evening. Muv has driven down to stay with old friends in Kent (it’s where we lived until I was fourteen), and I am holding the fort. That’s not to say I don’t miss my family, but for a girl who has lived out the back of a car in California for the past seven weeks, it’s rather lovely to have a proper house with which to play.

Basically this means that I get to hang out with the furs, test new recipes, eat all the ice cream I’ve found in the freezer, pretend to write a chapter or two of my book and go to bed when I like. At the moment I’m writing on the Knole sofa in the sitting room, being gradually pushed onto the floor by the dogs that are stretched out over, under and beside me. 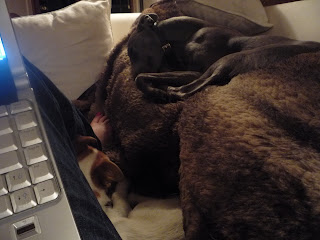 I’ve spent a good part of the afternoon engaging in advanced ball throwing in the garden and in the field behind the house. It’s the game that never seems to tire (for everyone but me).

By everyone, I mean:
Mr. Bilbo Baggins. Also known as Billy, Bilton & ASBO. Blue whippet. Hasn’t quite worked out that he’s not still a puppy, likes to climb the back of the sofa to drape himself around our necks. (This is known as ‘doing a dog boa’.)He’s very depressed right now as he can’t work out where his mama has gone: 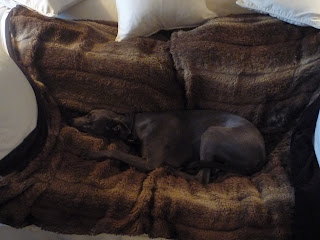 Maudie Littlehampton (because she has a very long nose as did the original ML, a character in a 1930’s cartoon). Also known as Miss Moo & Maudiepops. Jack Russell Terrier. Make no mistake: She’s in charge. The grande dame of our family. Has us all under her thumb. 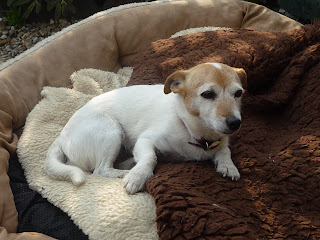 Posetta Baddog. (AKA Ratbag, Chorizo. Real name: Rosebud) Miniature wire-haired dachshund. Came to us from Dachsie Rescue as a very damaged little dog. In three years has discovered her inner puppy, and no longer bites everybody. Well, not everyone. Partic fond of licking out ice cream cartons. (Note to self: gather up 1,000 pieces of shredded paper container before Muv gets home tomorrow.) 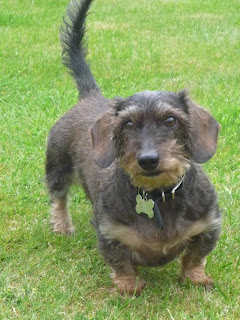 Tiger. More usually known as Iggy (My fault: I named her IggyWiggyTiggyWiggy). She’s a Maine Coon with the furriest knickerbockers & loo brush tail I’ve ever seen on a cat. She’s ace and has supercilious down to a tee. Don’t believe me? The proof: 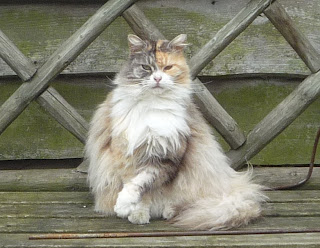 And, of course, our beloved Violet, (Billy’s mother). The sweetest natured, most affectionate whippet in the world. 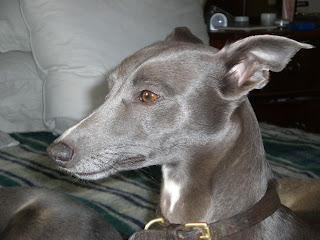 She’s in the animal hospital, recovering from being knocked down by a car on Friday morning. She’s not out of the woods yet, but we are cautiously optimistic about her recovery.

Thank you everyone for all your good wishes on here & on Twitter. I know some people think that we English anthropomorphise our animals too much, but the fact remains that they are a part of our family and when they are sick we all suffer.

Picture of the day: Eggs collected this morning & dropped off by a friend

Burberry Prorsum to show in London for SS10

Accessories, Dogs, My Life in England, My wardrobe, Shoes & Handbags

What a cute bunch!

All best wishes for Violet’s recovery – she has the sweetest face! Crossing fingers and toes that she’s okay and can come home soon.

I am in love with your cat, her fur is absolutely amazing!!! (Sorry not much of a dog lover, but all the best to Violet).

Good luck with your book, I don’t remember you mentioning it before, what is it about?

SO happy that Violet’s prognosis is good. Been fretting about her. Nothing worse than feeling anxious about one of the family is there? And they ARE one of the family. Foreigners, they just don’t understand…

Hooray for cautious optimism on Violet!! She is a beautiful dog (and what a wonderful GANG of dogs and cat you have!). As an animal behaviorist, I don’t think we know enough about how other species think (and definitely not how they feel) to assume we’re being anthropomorphic! It might be that we do have the same feelings – so it’s homology not analogy…

Wow, sounds like fun in your house. Violet is a beautiful looking dog, hope she makes a full recovery.

Wow, that cat is extraordinary.

Oh god, so beautiful, all the brood. Wonderful photo of the baddog and oh, your blue weepettes are just to die for. I am making little sighing noises. In my office. With colleagues.

Have just finished reading the weekend’s posts. Lovely. A sense of calm comes from the page. Best strokes and love to Violet.