Fashion at The Costume Institute Gala at The Met 2009

I am trying to get that laid back California charm to rub off on me. Be a gentler, nicer, calmer person. But then I had two glasses of delicious Roederer Estate Anderson Valley Brut NV fizz in the Club drawing room at the Ritz Carlton, had a quick peek at the first images from the Met Costume Institute Gala on WWD, and my inner fashion savage screamed that she wanted to come out to play.

I blame Kate Moss. Hers was the first picture I saw and all I cld think was: sweet mother of God, it’s Granny. I’ve written about her before:she loved her bronzer, kaftans, platforms & turbans well into her seventies. Looked JUST like Kate did last night. Uncanny.

I was a good girl after the Golden Globes. I turned down all offers to appear on radio to dissect (bitch about) the fashion, satisfying myself with a look at the machinations & deal-making behind the scenes on the blog.

Because, honestly, I don’t see the point in criticising a celeb for their red carpet apparel when what they wear so rarely has anything to do with their personal taste. At the mercy of the designers who (pay to) dress them, their publicists who want coverage no matter what, and their entourages who are just yes-men (you look FIERCE dahling), you can’t blame the star for being so befuddled that they end up thinking that this was a good idea: 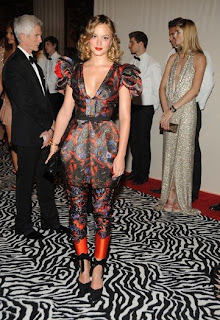 Although part of me thinks at least Leighton is having fun. And she has the rest of her life to wear a chiffon gee-own. Unlike Liz Hurley who really needs to think long and hard about putting the prom dress look into perma-storage. (I feel I can take a pop at Liz whose entire life is about getting commented on. But I do draw the line of running a photo of her.)

I did love Liv Tyler & Kate Bosworth for rocking 1940’s glamour in such a sophisticated, yet fashion forward way, and the fab, healthy, leggy models like Gisele, Karolina & Lily for playing to the gallery and showing off their endless pins in micro mini dresses. But my two favourite looks are at different ends of the spectrum: 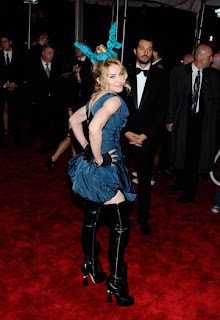 At least Madge owns her Louis Vuitton runway look & is clearly having a laugh. (I wld pass on the hooker boots mind you). And, frankly, I think she rocks her bunny ears. But the palm goes to Carolina Herrera. When I grow up, I want to have her elan. 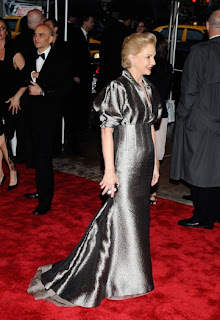 Images from WWD. Click here for the whole ghastly extravaganza.

Tuesday: Back in Marin, just north of the Golden Gate Bridge

This was exactly what I thought: “at least Leighton is having fun. And she has the rest of her life to wear a chiffon gee-own. ” And also that Madonna was probably having fun wearing the bunny ears. I’d love to wear bunny ears! I think it’s more important to have fun at a party and feel excited to be there wearing your crazy outfit than to appeal to the taste of people who are sitting home wishing they were there!

Haha – I thought exactly the same as you about Madge and Leighton. As did I’m sure the rest of the bored, bored world.