How to make exercise pleasurable: Hiking & a Hotel Bel-Air picnic

If I had been told a year ago that a stay in a sybaritic hotel was to be interrupted by a two hour hike, however beautiful the surroundings, I’d have pleaded an imaginary knee injury, stayed in bed, and worked my way through room service.

I never used to be like this. I did the Duke of Edinburgh’s Bronze & Gold Awards at high school, which involved camping, orienteering & strenuous two or four day hikes over the North York Moors.

On my GAP year I powered up, through and down 12km of interior rainforest to cross Pulau Tioman in Malaysia in 90% humidity.  But, once I started university, I reverted to my natural state: prone in bed with a novel.

The first inkling I had that I could enjoy exercise in adult life was when I bought a bike in London maybe four years ago. Gradually my tentative 5 min outings became half day expeditions down the London canal paths. Then I moved to Manhattan, bought another bicycle and became one of those boring cycling evangelists. (Yes – it’s so much quicker, yes – you can bike in four inch stilettos).

Bicycling has taught me not to be scared of exercise, that I am naturally capable of not collapsing after five minutes of exertion. That it was just exercising in a group where people judged my inadequacies & malco-ordination that I loathed. And that Gym and Games were the work of the devil.

So that brings me to California and to hiking. JK forced me up the Santa Lucia mountains and I loved every minute, so when the Hotel Bel-Air suggested a morning hike in the foothills of the Santa Monica mountains in Will Rogers State Park I jumped at the chance. (Not least because the hotel’s transport to the park was in a Bentley Coupe.)

The trails are well marked, (incredibly, Jonathan & Jenny from the Bel-Air had previously hiked the paths to check their safety & suitability for guests), and the day was overcast, so powering up was strenuous but not too shattering. The scenery helped. 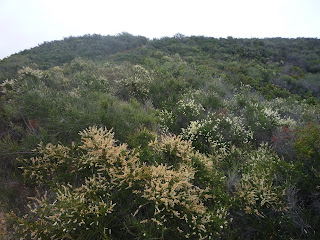 We carried on walking uphill. 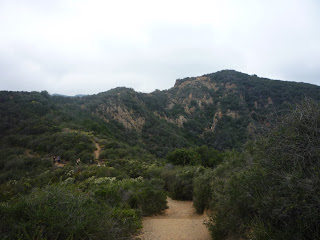 Then, because obviously my brain was addled by an hour’s uphill hike, I decided to run (I NEVER run, EVER) all the way back down the mountain along this path. I was so warmed up that it was immense fun, although if I had remembered to wear a sports bra, then I wouldn’t have had to run with my arms wrapped around my chest to avoid two black eyes. 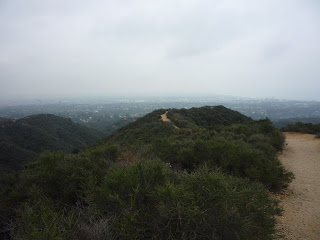 Of course, when you arrive back at the bottom in the flat part of the park to find Henry, the Hotel Bel-Air’s magnificent banqueting manager standing sentinel over a row of Little Red Riding Hood picnic baskets, it all seems so worthwhile. Henry also had a huge cooler of soda and an ipod speaker with soothing music for us to listen to whilst we collapsed on the rug he had so thoughtfully laid out. (We like Henry very much.) Yes, those are hotel slippers, tucked into the side of the basket, so that tired toes can wiggle free. (We also had Evian spritzers.) And, yes, that is a glass of Laurent-Perrier. That little lot will have neatly balanced out any benefits of the exercise. I am CRIPPLED today.

LLG was a guest of the Hotel Bel-Air

I can’t believe you brought back the horror of the Duke of Edinburgh Award to me . But the flashback was amply compensated for by the rest of your wonderful post. What a fabulous day: I’d do the London marathon if henry and his magical picnic were waiting for me at the other end. Talk about sybaritic.

That looks marvellous, how accomodating of the Hotel Bel-Air!!! And hiking can be fun if it’s nice… for me, exercising outside is only fun if it’s not too hot and not too cold. Very rare, so I tend to drag my lazy ass to the gym (not for the last few weeks, however).

ABSOLUTELY AMAZING! Love hiking in places like that… Sigh. Remembering DofE now. I always had intended to do Gold but never got round to it lol. THat picnic looks yummy 🙂

oh god, reliving the Duke of Ed currently, it ws a lot of fun though. I loved the way that you wrote about finding your love of excercise. i have not found my love of hiking though. i love to swim. i have to say that i love the picnics that are at the Bel Air hotel and have hiked for them!! The Four Seasons does great picnics too! keep enjoying your hikes. Steph

Aah, to live like that, even if only for a while, what a delight. Thank you so much for sharing all this with us!

Looks wonderful!
I always hated gym and team sports at school too, and only discovered the pleasures of exercise as an adult.

Wow, it looks incredible! And the scenery look great too!