Sunday. After an indulgent brunch with lovely L, I spent the afternoon in Mill Valley, Marin County, just over the Golden Gate Bridge from San Francisco, catching up on ten years’ worth of gossip with D, an old friend from England, who now lives here with his beautiful wife and S & J, their two fabulously entertaining children.

I thought I was supposed to be staying at the Ritz-Carlton San Francisco Sunday & Monday but, with my head in pieces from jetlag, a blown up car engine and the pressure of navigating myself through many hundreds of miles of driving, I managed to give them the dates of next weekend when I am in Venice Beach with JK, not this one.

Not my cleverest move ever. I was in two minds about what to do instead. It was 7pm, & my choices were narrowed: everywhere I tried was full & I didn’t want to harass any of my friends in the City late on a Sunday night.

So I decided to give the glitzy hotels a miss this time, & headed back to the Golden Gate Bridge, over which I had driven only half an hour before, and booked myself into the HI Marin Headlands hostel. It’s reached through a long, narrow single-lane tunnel and then a twisting drive through bright green hills on the very edge of San Francisco Bay. It’s only a few miles, and twenty minutes from San Francisco itself, yet surrounded by rolling hills, upon which deer graze. It’s hard to compute that we could be so close to an enormous city. 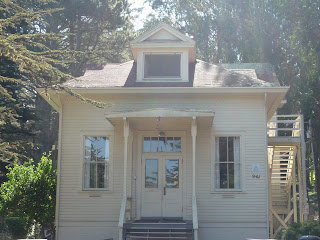 I did intend to move location on Monday, but there’s no internet access or Blackberry coverage at the hostel which meant that I spent the entire day writing and playing catch up on email at Sausalito library just down the road. It was so late by the time I finished that it made sense just to check back in again, before heading back over the Golden Gate Bridge into San Francisco on Tuesday.