If you follow my Twitter feed, you’ll know that we got rather tweet-cited about the existence of Whoopie Pies a couple of nights back in response to a link I posted to this New York Times piece. The name had such comedy value that I felt it was my duty to seek out a Whoopie Pie and report back.

Fortunately, I live Downtown within close proximity of Magnolia Bakery on Bleecker in the West Village, which was cited in the piece for its brown sugar and maple frosting version.

So, in the manner of David Attenborough, I set off on my voyage of exploration, expecting to have to hack my way through the urban jungle to find a Whoopie Pie in its natural habitat. The main obstacle standing in my way was a small TV show: Sex & the City. You may have heard of it? In one minute long scene, Carrie & Miranda sit on a bench outside Magnolia eating a cupcake each.

That was enough for Magnolia to earn a place on the Sex & the City location trail. Every day hundreds of batshit crazy women turn up, map in hand, to queue up for maybe thirty minutes to buy a (frankly mediocre) frosted cupcake & snap themselves outside the shop, prize in hand. The bakery is open until 11pm at night and there are still lines around the block then. However, my super explorer instincts chose a rainy, grey day for capturing my Whoopie Pie and there were only ten or so sheep-like Italians bleating & waving maps outside when I arrived.

A mere $1.75 was enough to secure what Magnolia label a ‘Whoopie Cookie’ from underneath a glass specimen dome. Unfortunately I needed proper scientific conditions to photograph and then dissect it thoroughly, so I carefully placed it in my expedition bag and headed for the nearest friendly laboratory. 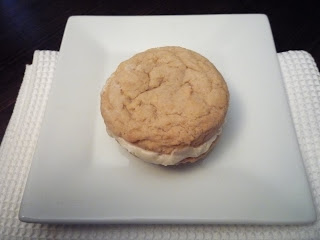 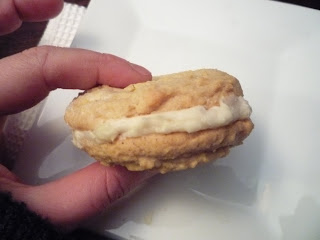 Grasping it between finger and thumb, I took a large bite. There was no crunch, just a soft, dense, moist crumb, more cake than cookie, with an almond-like texture. There’s a floury aftertaste which isn’t exactly unpleasant, just dull with no real discernable flavour.The frosting had a vague maple hint to it, but it wasn’t lip smackingly delicious. 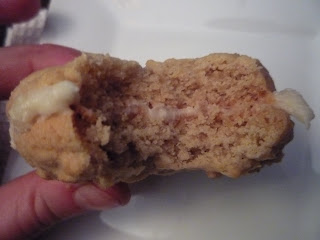 So: as good as the publicity? 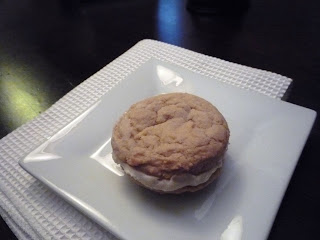 Self control. Or lack of it.

thank you for the in depth report! it still sounds pretty darn good from a place where there is no whoopie cookie.
I did the obligatory Magnolia visit when holidaying in NY. My fairy cake/ cup cake was very nice but the sweet thing was the taxi driver I saw outside eating one. I asked if he was free and he said yes if I didn’t mind waiting for him to finish his treat. He goes once a week on Thursday mornings and parks up and enjoys a cup cake. Sweet guy.

He was Sri Lankan and had lived in London, he missed nothing about it except the cricket coverage!

You should order a true whoopie pie from Amish country . . . See if anywhere in Lancaster, PA has a mail order?

I appreciate your scientific investigation, LLG. I read the Times piece, but always found Whoopie Pies to be overrated, a homemade Hostess Devil Dog. Glad to know I won’t have to hunt them down myself.

I always thought a Whoopie Pie had chocolate cake with a vanilla frosting? I think you need to find the original, true version, not the fancypants Magnolia version 🙂

I’m with IHeart – they totally remind me of Devil Dogs. Which I used to love, btw.

Oh gawd, do they all stand there outside the bakery, with their big heads and their little lollipop outline pretending to be Carrie? How nauseating.

It sort of like the phenomenon that is Sprinkles here in Los Angeles. I don’t get it. There is a line outside at all times and honestly they’re not that great, IMHO.

that looks wretched. you definitely need the pennsylvania version, which is chocolate and delicious and v. rich. want one sent to you?