It bags, and why I hate them

Why, why, why did we covet It bags? The large, shiny logo clad bags that supposedly proclaimed the wearer’s innate fashionability and flush bank account. Looking back over the years since Mulberry’s Gisele bag hit the shelves, it seems as though we have been lost in a frenzy of self-regarding accessory purchases. Shoes I can get, generally they are timeless, their purchase driven not so much by fashion as desire. But bags, big clunky, hardware-heavy bags seem to speak only to the wearer’s bank balance rather than their taste.

Of course, it’s easy to track the reasons for the trend: the collusion between magazine editorial and their advertisers (for most It Bags were produced by the heavy ad spend houses,) the huge margins for the houses, the enormous global sales volumes if a bag caught the imagination, the easy brand identification and the subsequent status conferred on the wearer.

I can feel smug now and say that I never fell into the status bag trap. In fact during the peak of the bag-hype years, I didn’t actually have one. Although it wasn’t that I didn’t want one exactly, more that I never found one I really liked. And I was subconsciously repelled by the idea of investing so much money in something every other woman seemed to be carrying, and which would be marked as fashion road kill within a season. Maybe if I had had more spare cash I would have fallen. Who knows?

I bought my first proper everyday bag in 2005. By the shockingly talented Janet Collin, it was a textured stone leather, had lots of pockets with clever hidden magnetic clasps, a little leather clad mirror hanging from the perfectly calibrated strap which fit just so under my arm and, best of all, it whispered rather than screamed raucously from my outfit. To me, it said everything a bag should. That is, nothing at all to the random observer, bar an impression of chic and style.

So, I’m not averse to bags by designers, bags with labels. But I want bags that will last, that are timeless, simple and, preferably, unrecognizable to the woman on the street. Since the stone bag, I have kept my day bag acquisition to a minimum. I bought another, simple, Janet Collin bag in black leather in 2007. I inherited my grandmother’s brown alligator bag. For grown-up affairs, funerals and the such-like, I have a black suede Lulu Guinness sample sale buy.

For weekends, my mother gave me a timeless tan men’s Mulberry satchel with a broad canvas strap for Christmas a year ago to replace her 1960’s leather one I carried for fifteen years. That same Christmas, at my request, my sister gave me the perfect dark brown satchel from The Celtic Sheepskin Company which fell apart in six months. (There’s something to be said for investing in a good bag after all.) And I have a small black nylon Prada satchel bag (a maternal present from the Milan Prada outlet), which I use to carry my prop kit on shoots (with the logo facing in).

I have to admit to one screamer of a bag: the Michael Teperson Toaster, which arrived as a gift from his atelier in Milan in a huge FEDEX box, stuffed with tissue and good wishes after I had interviewed him for a mag in 2006. And I do carry it, consoling myself with the knowledge that I love it for its clever design and not for any conferred status, or because I saw it flaunted on the arm of an actress in a magazine.

My current favourite bag is as low-key as they come. I found it in the Comptoir des Cotonniers concession in Galeries Lafayette on the boulevard Haussmann when I was at the Paris shows last October. I liked its super soft black calf leather, its clever simplicity and the long body strap, but popped it back on the shelf, thinking that 150 EUR was too much for a bag from Comptoir. 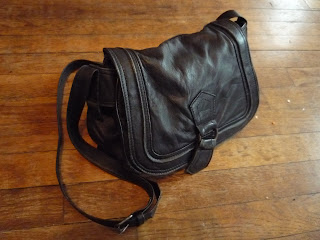 Of course, I saw it again two days later in the window of an agreeably pretty CdC store as we walked through the Marais, indulging in a spot of leche-vitrines. And, so it was bought.

I have worn it everyday since, slung across my body. It’s the perfect size, just big enough for a paperback, with two interior pockets, and a couple of zipped security ones. I can’t say it’s worn very well: rather than becoming agreeably battered, close up the soft leather now just looks like it’s been run over. But the $50 it will cost to get it renovated is well worth the money for I can’t think of a better bag to wear right now.

What to wear in a New York winter

Meanwhile, back in the East Village…

I used to only have low-key bags (and low-key clothes). Everything in practical, basic black! I like something more fun now, personally. I don’t particularly care if anyone else thinks they’re over, especially since those people would give their eyeteeth to snag my bags in a consignment store on the cheap.

Well, we'll just have to agree to disagree, since I am one of those people who think they are over & I'd rather stick pins in my eyes than buy a flashy, trashy ex-It Bag in a consignment store.

You have such good taste in bags. 🙂

For someone not into bags, you certainly have a collection of absolute gems. Gorgeous!

Personally, I choose bags over shoes every time; it is so much easier to buy a beautiful bag, in my case anyway. With shoes you have to worry about heel practicality, size, comfort, versatility to a much greater degree. Although that’s not to say that I don’t LOVE a great pair of shoes..

I share your feelings toward It Bags, I’ve never understood the appeal. I don’t want my outfits to be about the Bag, or the bag to scream – I’d rather let my shoes make the noise! I need the bag to carry life’s essentials (and then some more) around, day after day. Being a Scandinavian minimalist at heart, this is nowadays usually my trusted quite anonymous bag of thick black leather, slung across my body. Or one of the quilted leather ones I inherited from my granny.

Thank you for your lovely blog – I’ve been browsing through it for days and enjoy your thoughts and writing enormously!

I’m currently struggling to find a new bag. It’s not paying I object so much (although I would prefer to pay less as I am not cash rich) but it’s exactly what you say, lots of people will have an it bag, I don’t like it 7 times more than more from Gap so why is £700 more and why they not actully that nice? Also I want a secure bag for many hundreds of pounds and lots of them don’t even fasten very well.
Ah well the search continues. Am going to check out the lady you have bought 2 bas from.
Great post!

Hi LLG, it was great to hear you promoting Celtic Sheepskin’s Sennen bag but a real shame to hear it only managed six months before falling apart. That is unusual; despite not costing the Earth we do strive for the highest quality in all our products.

Of course, no product batch will be fault free, we’ve always said that it’s the way in which these problems are dealt with that sets a company apart from its competitors.

We have now changed to a European bag manufacturer and we’re really pleased with the quality and style they offer.

If you are prepared to give us another chance we would love the opportunity to make up for the poor performance of the previous bag. The Sennen is no longer available but if you would like to try another bag, perhaps our (best selling) Eden bag, we would be happy to have one shipped over to you.

If you would like to arrange for your sister to contact us to preserve your anonymity that would be fine.