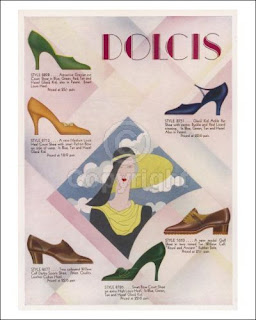 So it seems like the end of an era: Dolcis, the British High Street shoe shop, which can trace its history back to a barrow trader in the 1860s, is to disappear from the High Street.

The news isn’t surprising: the brand went into administration last month, and ninety stores closed immediately. Footwear company Stylo, which operates the Shellys and Barratts brands, has aquired Dolcis. They intend to run the stores for three months, after which ten will be rebranded as Barratts and the remaining 85 will close.

Dolcis is another casualty of the price squeeze in the middle market: fellow High Street store Ravel folded last year. With the advent of low priced, highly fashionable shoe ranges at Primark and New Look, which shift milllions of pairs a year, the market for shoes of similar quality but at prices 25 % higher was almost totally eroded.

It hasn’t helped that the above clothing stores, along with most of the Arcadia Group (Topshop, Miss Selfridge, Principles), plus Zara, Mango etc all now sell shoes alongside their other retail offers, thereby reducing the need to visit separate shoe shops.

Fifteen years ago, this wasn’t the case. Dolcis & Ravel were perceived as fashionable, part of the very limited shoe choice on the High Street but, as our access to fashion has become increasingly democratised, so our desire to buy more fashionable and cheaper footwear has increased. Dolcis was left flailing in the wake of a huge industry change, with no brand identity and an aging customer.

Heatherette to get into bed with Mac

Marios Schwab to move to Halston & to New York

LLG Retail: Behind the Scenes in Italy with Oliver Sweeney

I was never a fan of Dolcis, I thought they made flimsy shoes to be honest, but I always liked Ravel and still have shoes from there that have lasted me years. I wondered where they’d gone! I don’t understand why people buy their shoes from New Look or Primark. They look cheap and are bad quality.

Me too Susie, me too! LLG xx

Ahhh farewell to Dolcis. Such a part of growing up – you were nothing if you didn’t have a pair of Dolcis red level platform pumps when i was in lower school… the very first pair of shoes i saved up for and bought myself was from this shop!