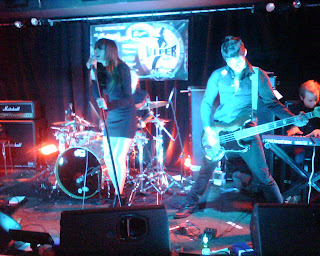 During CMJ in October I hopped it down to Fontana’s on the Lower East Side for Los Angeles’ Viper Rooms’ series of showcase gigs. On the Friday I was there to support my gorgeous friend Julian aka Shah (ex-Whitey) who had flown in from LA to play bass for CC Sheffield’s band Le Rev.

A somewhat odd evening. Julian whisked us up to backstage before the show, and I sat down with CC who charmed me from the get go. Intelligent, self-deprecating and funny, she is a talented actress & model who puts a large chunk of her earnings into her self-financed band. She hasn’t taken the easy option of churning out pretty girl pop, and instead plays a fantastic post-punk set. It has to be said she also looks fabulous.

After jumping about like a Mexican bean during their (very good) set, I retired backstage to regroup & get stuck into the vodka. Which is when Julian appeared, uttering the immortal line, “Harvey Weinstein wants to meet you.”

Somewhat tipsy, and very unbelieving (Fontana’s isn’t exactly a glam venue), I followed him downstairs, weaving through the grubby dancefloor to the front bar where Harvey Weinstein was indeed perched across a bar stool, talking with CC, who had told him a writer from XXXXX was in the house. Hence the summons. Turns out he’s a very big fan of the band and of CC, who he thinks will go far. We chatted for a while, and then I made myself scarce, whisking into the bathrooms to scrawl down, rather illegibly, Harvey’s pearls of wisdom. 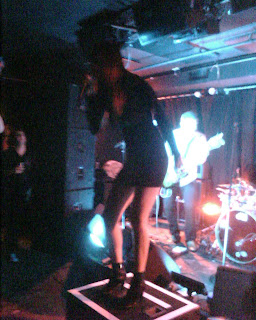 Where to eat…and where not to in New York

My quintessential Manhattan in 2007

Debauchery at The Box

My Life in New York, My wardrobe, What to Wear

I love getting to hear about bands, and CC sounds awesome. I love girls who front their lineups, and it sounds like CC is 100% committed to what she does..
It does sound like a surreal sort of thing to happen though, meeting Harvey Weinstein in the middle of it.

Plus, I must say she has great style- something I forgot to note at first..

“Harvey Goldstein wants to meet you.”
well, those would have been words to sober me up! In a shit scared kind of way; I always thought he seems like a
bit of an intimidating dick. Though to be honest, I know very little about it.
Verdict?

Exciting all the same.

Happy Christmas to you!