Way In was THE destination for the groovy chick in 1967 when it opened as an in-store boutique at Harrods. The Colette of its day, it sold records, had a live DJ & a juice bar, and stocked the hottest brands, which included Bianca Jagger’s favourite shoemaker Chelsea Cobbler. The London shoe company clad the hippest feet on the Kings Road, and their shoes are now in the V&A Permanent Costume Collection & in the Bath Fashion Museum. Chelsea Cobbler had my Aunt Amanda & her best friend Richard Smith at the helm, & my sister & I bought her this print from Getty for her 60th a few years ago. 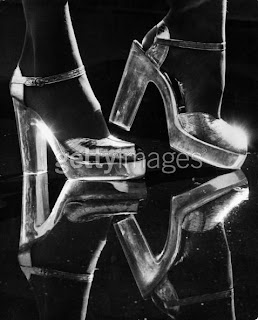 These Silver kid platform shoes with perspex heels sold for about £25, and were shot at the opening of Chelsea Cobbler at Way In, Harrods in 1973.

I remember visiting Way In in the 70’s & 80’s. I was about 8 or 10, & used to think it was the coolest place imaginable. Unfortunately, in 2007, most regional department stores have more a imaginative trend buy than Way In. The fact that they have a Sharon Millen catwalk show taking place on 23 August pretty much sums up its decline from fashion forward destination into fashion irrelevancy. It’s a shame they didn’t capitalise on the brand heritage to turn it into a British Colette or 10 Corso Como.

Back to England next week

Cretins. They are all cretins

Ah, I remember Way In. It was THE place back in the 80s. Funny how times go by.

Cracking up at SHARON Millen! I remember Way In in the 80s when I was very proud of the W&LT long sleeve stripy top I bought in the sale. Oh how I loved those carrier bags. Hmmm, Harrods just doesn’t get it does it?