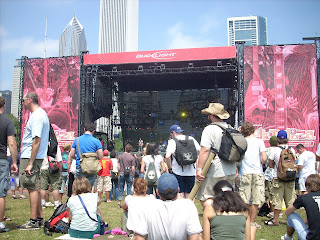 A grown up rock festival held in a huge city park ringed by skyscrapers, where bunny rabbits occasionally hop over your ankles, is a wholly new experience to an English festival journalist, who has been more used to greeting each festival day by crawling out of a sauna-like tent to queue at a standpipe to brush her teeth, than by popping into Starbucks for a double espresso on her way to catch the subway to the festival.

I’m loathe to describe Lollapallooza as a festival, in the sense that the English would use it. The nearest English equivalent is a three day Party in the Park but with rockers rather than boy bands. When you take the need to camp out of the equation, it means attendees must either live in the vicinity or have the wherewithal to pay for accomodation. This immediately weeds out the more impoverised, and often more amusing & interesting attendees.

There is none of the sense of anarchy that underlies English, and some US festivals. No grown men dressed as pixies, no fairy outfits, no hippies, no dogs on strings. I’ve seen just two people with dreads. And barely a soul is smoking, discernably drunk or chasing imaginary friends. There is also no mud, a very pleasant change from Glastonbury.

Lollapalooza is about as alternative as a Buckingham Palace garden party. I’m writing this in the AT & T emblazoned aircon open access tent which is full of dozens of laptops with internet access, cell charging stations, Playstations, luxe sofas and plasmas showing sports and live feeds from the main stage. Treating the plebes like VIPs is a remarkably clever way to get your brand across to your target audience.

Most importantly, the music booking & scheduling is intelligent: a clever mix of the good, the bad, the new, the old and the evergreen. It is staggeringly hot though and dancing in the midday sun at The Fratellis was an (enjoyable) effort. We have spent rather a large part the following sets lying under various trees tapping our fingers & toes. Stand outs so far: MIA, The Rapture, & Electric Six. Pottering off to LCD Soundsystem & Daft Punk now. Then I shall be doing collapsing. 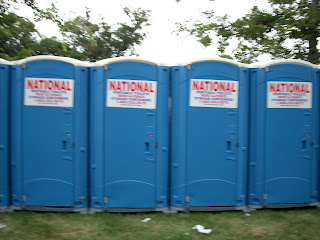 Having a magnificent time on the Magnificent Mile

LLG Travels: We arrive in Moscow…

Glad at least the music’s good…but too bad it’s lacking that crazy festival vibe. Perhaps you should try Burning Man next, sure to have the aforementioned men dressed as pixies, smoking, dreads, and drug casualties galore.

Tapping your finger and toes!!!???I’m sure their were more attractive women then men, lucky for the bands! Wow, you make it sound so unappealing. I was not there but… according to a great deal of music blogs and Sirius’ Left of Center, it seemd (MUSICALY of course) that it was a success, which you do give credit for. Tell me you had fun with Electric Six! I would of loved to go to see so many bands, and maybe liberty london girl herself…