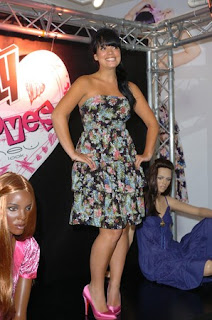 Given the fact that I work in fashion, I try to stay away from the subject of weight. I learnt my lesson during London Fashion Week when I appeared on BBC network radio to talk about the never-ending media debate about size zero models. The BBC then quoted me on their news website, which is syndicated to thousands of other websites worldwide. Unfortunately, someone took a vital word out, which meant I was seriously misquoted globally. I still get email vilifying me for my supposed belief that overly thin models aren’t a problem.

But when musician Lily Allen posted this cri de coeur on her MySpace blog on Sunday night, it resonated.

“im on my own in america again . I used to pride myself on being strong minded and not being some stupid girl obsessed with the way I look . I felt like it didnt matter if I was a bit chubby cause , im not a model , I’m a singer . Im afraid I am not strong and have fallen victim to the evil machine . I write to you in a sea of tears from my hotel bed in Seattle , I have spent the past hour researching gastric bypass surgery , and laser lipo suction.”

We all like to have opinions about people in the public eye (I was going to say celebrity, but that is a much over used word), and Lily Allen has received a lot of stick both in the press and from the public about her gobby, ballsy persona, being British actor Keith Allen’s daughter and being a normal sized woman.

Unfortunately, it would seem that it’s not just sticks and stones that break a person’s bones. I always thought that Lily’s feisty attitude would protect her from the raging sexism in the music industry that dictates that unless you are a folk singer or KD Lang, your success as a female singer will include skinniness, trowelled on make up, short skirts and provocative videos. So far, she seems to have escaped that pressure admirably, creating a strong look (normal figure, prom dresses & trainers) that suits her.

However, it’s naïve to think her image and looks wouldn’t inevitably be the subject of public scrutiny: certainly those that sup with the devil need a long spoon. The NME voted her Worst Dressed last year, an award that seems anachronistic at best, staggeringly irrelevant & sexist at worst.

This makes it even more admirable that she went ahead with the (not bad at all) Lily Loves collection at British fast fashion retailer New Look. Unfortunately, it means that she has left herself wide open to buckets of criticism of her style, rather than of her music, outside of the music press.

What kind of society do we inhabit where a girl who is a perfectly normal & average size 12 (a US8) is considered to be ‘chubby’ Of course, I work in an industry where weight is an issue. It drives me insane that since I started out buried in a fashion cupboard sorting returns ten years ago that samples have shrunk by at least two sizes. But this girl isn’t a model, (which is a whole different can of worms), she is a musician. And neither is she a Beth Ditto, making a statement about women’s weight issues. I cannot imagine what it must be like for a young woman to be the subject of such relentless pressure in the media about her image. It’s not surprising that she broke down. I hope that the thousands of messages of support on her blog help to convince her that she looks just fine the way she is.

Things I Miss About London. Part Two: The dog

Well put! It would be wonderful if those in the public eye were given a respite from the relentless focus on weight and appearance, but apparently that’s what people want to read about. Call it schadenfreude, but tabloid-readers love to see photos of celebrities in all their cellulite-y glory.
Lily Allen is still thinner than the “average” American woman, who (at last report) was a size 14 (U.S.!) and getting fatter by the year…